The Relationship Between Shelia and Mrs. Birling in ‘an Inspector Calls’.

Explore how Priestly presents and develops the relationship between Shelia and Mrs. Birling in ‘An Inspector Calls’. Priestly uses dialogue and stage directions to show a void between different generations. Although Mrs. Birling is Shelia’s mother she still refers to her as a ‘girl[s]’. The audience can sense Mrs. Birling’s condescending tone and how she still retains the view that Shelia is an immature and ignorant ‘girl[s]’ even though she is a fully grown adult who will soon be wed.

Don't use plagiarized sources. Get your custom essay on
“ The Relationship Between Shelia and Mrs. Birling in ‘an Inspector Calls’. ”
Get custom paper
NEW! smart matching with writer

This is ironic as it is in fact Mrs. Birling who is the ignorant character in the play when she states that Eric and Shelia are ‘over-tired’ and will ‘be as amused as’ the older Birlings are in the morning, but the audience know this is false and the younger generation of Birlings have matured and learnt far more than their elders. Priestly truly shows Shelia’s development and maturity as she changes her address term for Mrs.

Birling from ‘mommy’ to ‘mother’.

The use of the word ‘mother’ is much more detached and formal and suggests Shelia has broken out of the conformity of her mother’s belittling opinions. In this short space of text Priestly reveals Shelia as an adaptable and developing character in the play. To both a modern day and 1945 audience, calling an engaged women a ‘girl’ is ridiculous and patronising, but then again Shelia is a spoilt ‘mummy’s’ girl to begin with. Priestly is showing how the younger generation must rise up and take their place in society instead of remaining spoon fed and ignorant.

It takes a big event, Eva Smith’s death, for Shelia to realise this but to a 1945 audience this would resonate as with the aftermath of a war in front of them and ‘millions of Eva Smiths and John Smiths’ who died in that very war, priestly portrays that this is a better time than any to take the reins. This suggests, to encourage social change, Priestly believes people need to be able to adapt and change their ideas like the younger generation in the text. Priestly generates tension and conflict between Shelia and Mrs. Birling by creating Irony.

When Shelia says ‘what do you mean by saying that? You talk as if we were responsible’, this will later become ironic as Shelia is the character that focuses on and learns the most from the fact the family ‘were responsible’. This denotes a self-conflict and development in Shelia’s character as she breaks away from her mother’s views and becomes ‘responsible’ for her actions. Here Priestly is showing the audience how we should look at ourselves rather than blame someone else or ignore the consequences as Mrs. Birling does.

The divide between socialist and capitalist views is emphasised by the juxtaposition of ‘you’ and ‘we’, the reiterates the older Birlings’ introverted philosophy and their denial to live in a wider community but instead their desire ‘for a man to mind his own business’ and continue to deny responsibility. Priestly uses dialogue to present and develop dependency in the relationship between Shelia and Mrs. Birling. When Sheila is warning her mother about ‘building up a wall’ between her and Eva, her following utterance highlights Shelia’s awareness to the Inspector’s methods and purpose, ‘He hasn’t started on you yet.

This declarative is written in italics which in a play would allow an actor to edit their tone and portray Priestly’s ideas on generation divide to the audience and emphasises how Shelia wishes to protect her mother from revealing her narcissistic and narrow minded views, this allows the audience to identify with her and see her as an alternate hero in the play. Here Priestly is showing how the younger generation are much more mature than many people think but lack the confidence to push through their ideas and need the approval and support of the older generations.

With the war in 1945 social change was inevitable as young men and women were forced to serve their country and take up their place in society, throughout the play priestly praises and encourages the youth of 1945, especially women as they have a much more active role in society, through the characters of Shelia and Eric whom also begin to take a stand and realise their, potential and their value in society. Again Priestley’s dialogue between Shelia and Mrs. Birling reveals tension at the heart of their relationship.

Despite being ‘very pleased with themselves’ the dialogue and stage directions in the early pages of the play suggest otherwise. When Shelia accuses Eric of being ‘squiffy’ Mrs. Birling responds, referring to her as a ‘girl[s]’. This conveys and immediate difference between the two females views on social etiquette. The exclamatory sentences Mrs. Birling uses reflect her shock and repulsion that Shelia would use a colloquial term such as ‘squiffy’. The audience also get an indication that Mrs.

Birling doesn’t respect Shelia as a grown woman whose opinions are valued. Shelia is a bride to be and is an adult in her own right however her mother persists to use the rather demeaning noun ‘ girl’ to describe her daughter. Priestly is attacking the older generation for constricting their children’s uniqueness and attempting to create clones of what he sees as a failing generation. He expresses his belief that the classic phrase ‘children should be seen and not heard’ is thoroughly outdated and children should be given a voice of their own and be individual.

The Relationship Between Shelia and Mrs. Birling in ‘an Inspector Calls’.. (2016, Sep 16). Retrieved from https://studymoose.com/the-relationship-between-shelia-and-mrs-birling-in-an-inspector-calls-essay 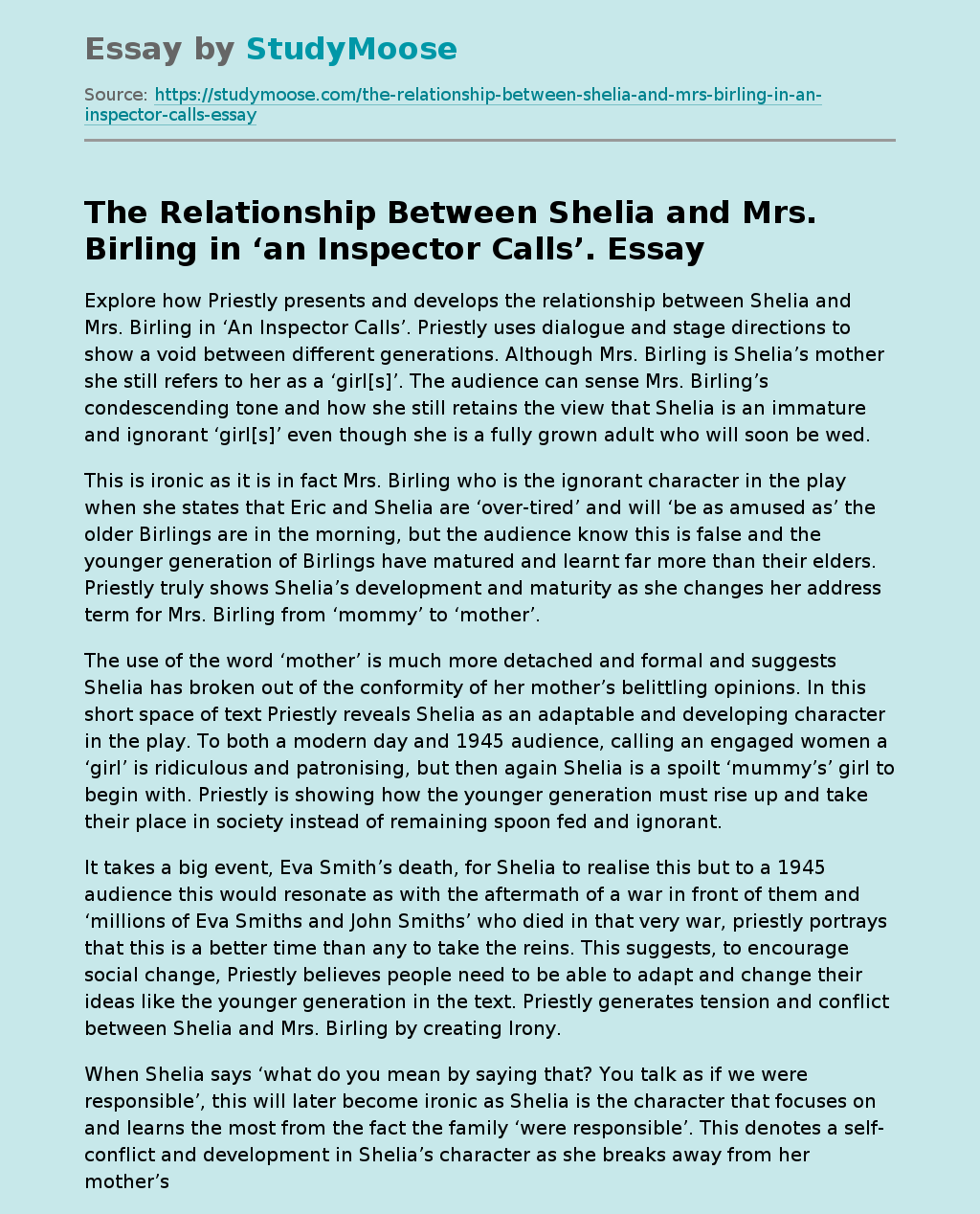