How Does Priestley Express Ideas About Eric Birling in "An Inspector Calls"?

One explanation for Eric’s drinking perhaps is the hypocrisy of his family, and Eric feels he has to join in with the male dominated culture in society. For example when Gerald suggests he is going to be careful Eric expresses his amusement; “Eric suddenly guffaws. His parents look at him” this is the strongest suggestion yet that Eric is aware of Gerald’s affair, if not the exact specifics. When asked by Sheila what was causing his amusement Eric replies; “I don’t know – really.

Don't use plagiarized sources. Get your custom essay on
“ How Does Priestley Express Ideas About Eric Birling in “An Inspector Calls”? ”
Get custom paper
NEW! smart matching with writer

Suddenly I felt I just had to laugh” this shows how Eric defends the male and shows how Eric has to defend the male power not the female power. This could suggest that the hypocrisy of Gerald who is highly esteemed by his family had led to Eric’s frustration and led him on a path to alcoholism.

Eric clearly shows much more sympathy to Priestley’s views than that of his father.

Discussing Eva Smith’s death, Eric suggests; “Why shouldn’t they try for higher wages? We try for the highest possible prices? … you said yourself she was a good worker” this shows how Eric is questioning not only the decision making of his father but also Mr. Birling’s view on society. Mr. Birling is a keen advocate of everybody “looking after himself” but when a lower class workers attempts to improve their life changes Mr. Birling is contradictory and fires Eva. Showing how Eric’s rhetorical question of “Why shouldn’t they try for higher wages?” shows how Eric is almost representing Priestley’s views of the selfish, aggressive form of capitalism, which Mr.

When Eric’s affair comes to light, his choice of language leaves ambiguity to the reader about the nature of Eric’s affair. Did Eric force himself upon Eva? Or was Eric showing sympathy and attention to an innocent girl? Eric states to the inspector; “She wasn’t the usual sort. But – well, I suppose she didn’t know what to do” by suggesting she wasn’t “the usual sort” suggests that it is Eva innocence and desperation that causes Eric to be attracted to Eva, this could lead us to have sympathy for Eric. As if here were to see Eva not purely as a prostitute but also as somebody who can change and reform shows a more sympathetic side to Eric; that everyone can change.

However the ambiguity comes from the statement “well, I suppose she didn’t know what to do” this sounds strongly like rape from Eric. That he has clearly forced himself upon her with Eva not knowing how to react. Again highlighted in the following remark “Yes, I insisted – it seems” again suggesting how Eric was the one dominating the situation. Although Eric’s guilt is evident when he tries to express doubt on his wrongdoing with the quote “it seems” showing how Eric is not comfortable with the sin he has committed.

If this were to be the case it paints a much darker picture of Eric; suggesting he had no genuine car for Eva, but was only interested in the need to fulfill his sexual desire.

Eric’s relationship with Eva continues to lack any real substance and highlights Priestley’s thoughts that woman have little choice about their choices in order to survive. As Eric continues to describe his relationship with Eva he describes “And this time we talked a bit” for a couple to only “talked a bit” is hardly a romantic statement, and suggests that Eric pretty much had sex with Eva straight away. The fact that Eric also couldn’t “remember her name or where she lived” shows how from Eva’s point of view Eric was someone who was abusive with her, and didn’t seem to look after her. The only reason for Eva to continue to associate with Eric would be because of the extreme poverty she faces; and showing how despite the abysmal way she is treated she has no choice but to accept the dominance of men.

After the Inspector has left, Priestley does give the reader an opportunity to take a more optimistic view about what Eric’s future may hold. After his mother has condemned Eric outraging; “I’m absolutely ashamed of you” Eric’s reply shows a sign of maturity and of a genuine capacity to change responding, “Well, I don’t blame you. But don’t forget I am ashamed of you as well – yes both of you” the fact that Eric is now admitting shame on himself could suggest he is now in the frame of mindset to change his ideals and values. The way Eric also condones his parents also sounds remarkably mature saying “But don’t forget I am ashamed of you as well” this shows how Eric is condemning his parents in a very authoritative way, and turning the tables on his parents using mature demeanour.

Eric continues to ridicule his parents, particularly expressing doubts over his father’s viewpoints. In one of his final lines Eric remarks; “You told us a man had to make his own way…and then one of those cranks walked in – The Inspector (laughs bitterly.) I didn’t notice you told him it’s every man for himself” the way that Eric uses repetition of his fathers notion about “every man for himself” shows how Eric ridicules Mr Birling’s views on Priestley’s behalf to show how many of the beneficiaries of capitalism believe in that principal; except those who need to be looked after the most. The message from Priestley that no matter how flawed or wealthy the character everybody has the ability to change.

How Does Priestley Express Ideas About Eric Birling in "An Inspector Calls"?. (2017, Nov 06). Retrieved from https://studymoose.com/how-does-priestley-express-ideas-about-eric-birling-in-an-inspector-calls-essay 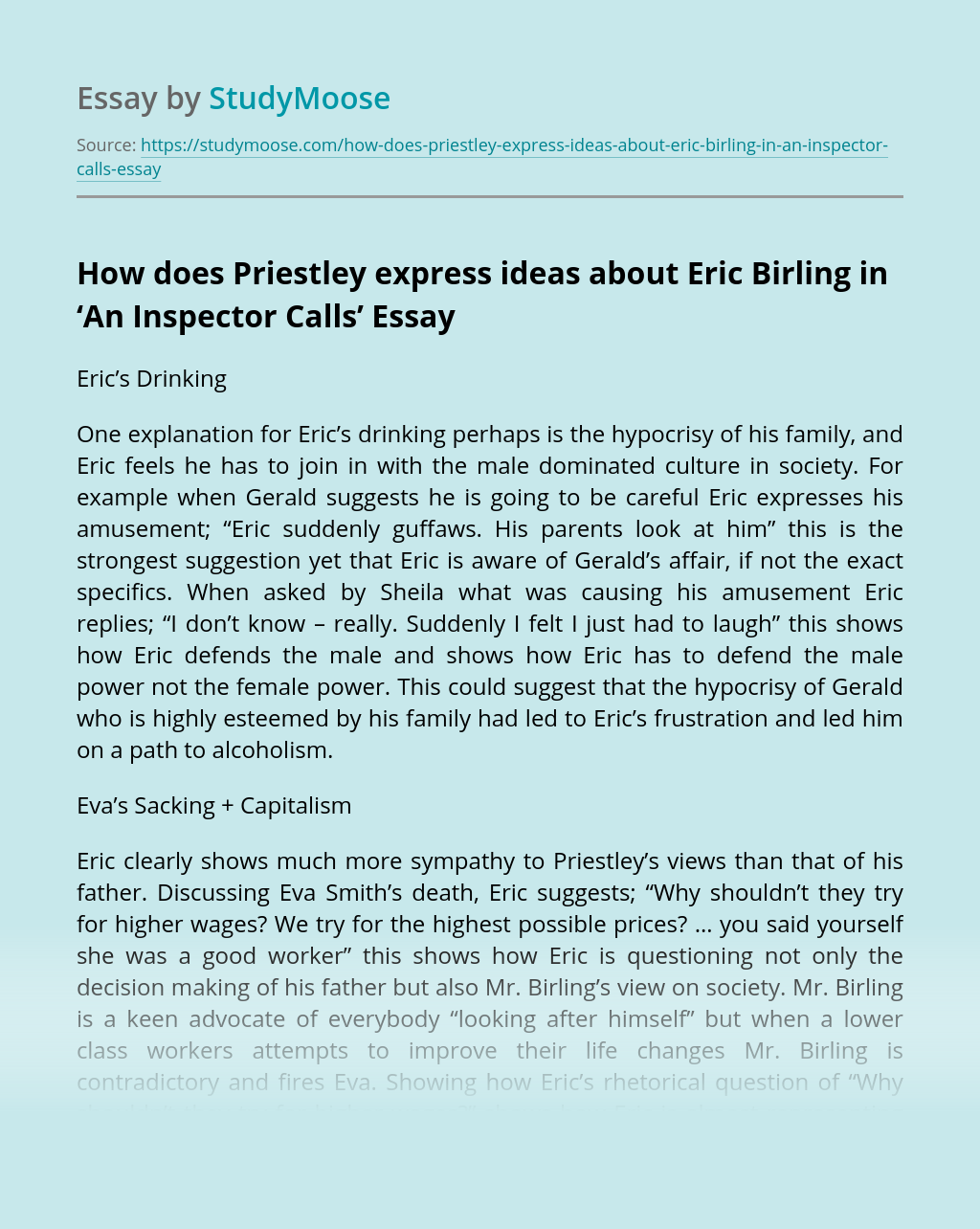