Explore how the theme of power is presented in ‘An Inspector Calls’. How would an audience react to this presentation? In ‘An Inspector Calls’, power is presented in different ways and by different characters. Each character exudes or uses their power differently. These different methods of portrayal may shock the audience, and make them see certain characters in a different light. At the start of the play, the first hint of power we see is through the appearance of Mr Birling when Priestly describes him at the start of the play.

Don't use plagiarized sources. Get your custom essay on
“ Explore how the theme of power is presented in ‘An Inspector Calls’ ”
Get custom paper
NEW! smart matching with writer

Mr Birling is described as a ‘thickly built’ man, which gives us a sense of power due to his size. The audience (only being able to see the actor playing Mr Birling) may respect Mr Birling due to his appearance, confidence and his position in society.

However, as the play progresses, we see that Mr Birling is powerful also in terms of business, and the fact that he fired some women because they wanted a small raise may make the audience more on edge about Mr Birling, as they might feel he abused his power.

Another time we see power is when the Inspector enters. He seems to have control over the setting, as when he enters the lighting goes from an intimate pink to a ‘harsh, white light’. The light is similar to that of an interrogation light, which could signify the Inspector having power over all of the Birlings. The word ‘harsh’ could have negative connotations in that it might make a reader feel that the Inspector is dangerous.

The audience may feel slightly intimidated by the sudden harsh change in lighting, and have a sense that the Inspector is more powerful than he lets the Birlings know.

After Mr Birling, the next character the Inspector questions is Sheila. Although Sheila is a young girl, she is of a high class, so she does therefore have some power. She too abuses her power and orders to have Eva Smith fired from her job when shopping because Sheila thought Eva was laughing at her. She says ‘If she was a pathetic looking thing I don’t think I would have bothered’. This shows us how easy it is for people to take advantage of power they have, even if it’s very little to begin with, and that people can often use it for the wrong reasons. To Shelia’s ‘reveal’ of her use of power, the audience may be shocked that she used her power for such a shallow reason. However, as the play progresses, we see that Sheila becomes more mature and regrets her actions. Nearing the end of the play, Mrs Birling begins to get questioned by the Inspector. At the beginning of the play, she is described as her husband’s superior, so we already have the impression that she finds herself powerful.

Then we find out that she had the power to help Eva/Daisy but denied it. She says ‘Girls of that class’ which could suggest that because she’s in a higher position, she has more power over them. The word ‘class’ really just highlights how strong the class system was before the war. An audience would have been viewing this after both the world wars, and may be shocked about how Mrs Birling used her power to deny Eva/Daisy help. Finally, in the Inspector’s final speech, he uses lots of powerful techniques to get across Priestley’s political message to the Birlings. It is about how power should be shared evenly and that there shouldn’t be differences in society based on social status. He says that ‘if men do not learn this, then they shall be taught with fire and blood and anguish’.

He uses many different techniques here. Priestly is using his knowledge of events to come (the world wars) which is linked to the fire and blood and anguish. That is also a triple, which makes the Inspector’s speech more powerful. It could also be seen as an image of hell. An audience’s reaction to this could be wonder at how powerful the Inspector’s message is, and then shock at the fact that afterwards, Mr and Mrs Birling try to forget all about it. Overall, I think that the theme of power is mainly presented through characters and their actions. The Inspector seems to be an extremely powerful character and I think that a lot of audience members would be influenced by his powerful speeches as Eric and Sheila Birling were.

Explore how the theme of power is presented in 'An Inspector Calls'. (2016, Mar 21). Retrieved from https://studymoose.com/explore-how-the-theme-of-power-is-presented-in-an-inspector-calls-essay 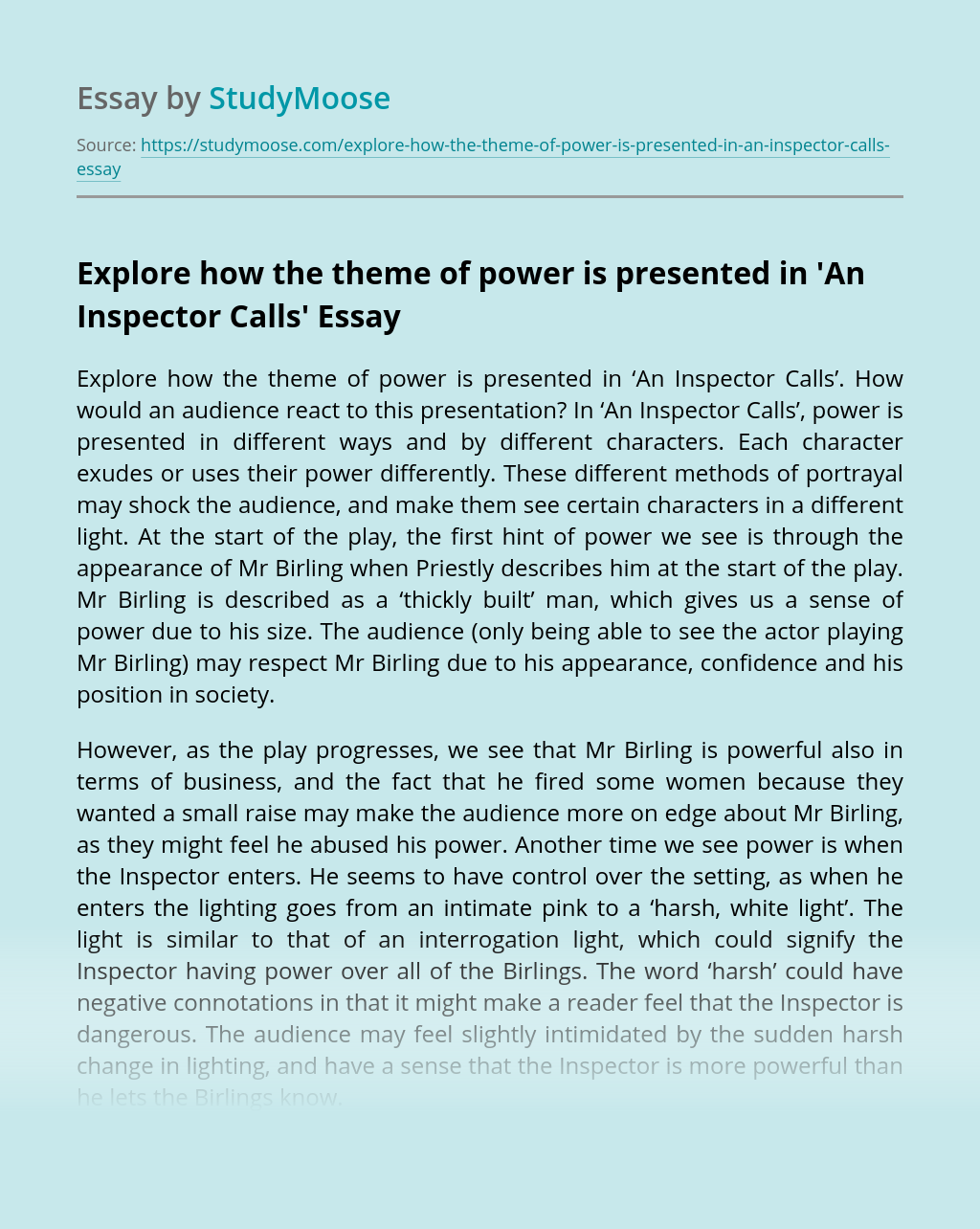