The concept of altruism has been around for a long time and the debate on its existence has been for almost as long in both philosophical and psychological circles. Altruism has been defined by Batson et al., (1981); the motivation that arises within in an individual to help another in distress, from the desire to reduce the other’s distress. Some have argued that true altruism does not exist.

Those believe that every act of kindness us humans commit has an underlying ulterior motive; we help others to help ourselves.

Don't use plagiarized sources. Get your custom essay on
“ Does True Altruism Exist? ”
Get custom paper
NEW! smart matching with writer

This is known as egoism, and current theories regarding the existence of altruism tend to be egoistic; that is, everything we do is directed towards one end-state goal, and that is benefiting ourselves. And benefiting ourselves does not necessarily entail gaining something in return for performing the act, but merely reducing our own personal distress by seeing another’s distress, can be defined as egoistic. Our distress (guilt, shock, fear) was as a result of seeing another in distress and by helping the other person by reducing their distress is not an act of altruism, but egoism, as reducing their distress reduced our own distress.

A study was done by Cialdini et al., (1987) which provided a hypothesis supporting the egoistic theory. They performed two experiments in which they came to conclude that helping another in distress was as a result of relieving the personal sadness within the observer that arose from the heightened empathy the observer felt for the sufferer, rather than the selfless act to relieve the sufferer of their distress.

In the first experiment conducted, it was found that high-empathy-set subjects did show elevated helping scores, but that they were no longer helpful when they received a sadness-canceling reward.

Therefore, it is as a result of personal sadness that led to the motivation to help the sufferer, rather than empathic concern. In the second experiment conducted, Cialdini posed the Negative State Relief model. It was under this model that it was believed that people help others as a response to their own egoistic behaviours. Regardless of the high levels of empathy, the subjects helped less when they were made to see their personal sadness as fixed. Thus, they concluded that it seemed to be personal sadness that led to the subjects helping, despite the high levels of empathy.

However, there have been other theories in support of the existence of altruism. The Empathy-Altruism hypothesis predicts that empathy leads to altruism. And in a study conducted by Batson et al., (1981), when a young woman received electric shocks and then giving the subjects a chance to help her by taking her place, the researchers predicted that if empathy led to altruistic acts that the subjects would help the victim regardless if the chance to escape without helping is easy or difficult. And the results following both experiments supported the hypothesis that empathy leads to altruistic acts rather than egoistic. However, in the second experiment, when the conditions for escaping were difficult without helping, a low empathic response led to helping. This concludes that when subjects are being forced to help a sufferer, they will help, but only to escape the situation, and this is egoistically motivated behavior.

By taking both of these articles and experiments into account, and regarding the theories posed by each, I have favoured the argument that true altruism cannot exist in the normal parameters of human psychology because by nature we are designed to ensure our own continued existence and will therefore perform acts and behaviours that will promote our survival, and avoid performing certain behaviours if we feel that it might cause us harm. For true altruism to exist, you would need to be able to place everyone else’s wellbeing before your own and receive nothing from it. Certain forms of these can be seen in actions we perform for our loved ones. But it is even in these deeds that we receive praise, reward and even heightened sensations of self-motivation, which then causes the actions to be egoistically motivated. Therefore it’s not completely selfless, the pleasure rewarded from the action can be seen as a suitable motivation to be selfless. 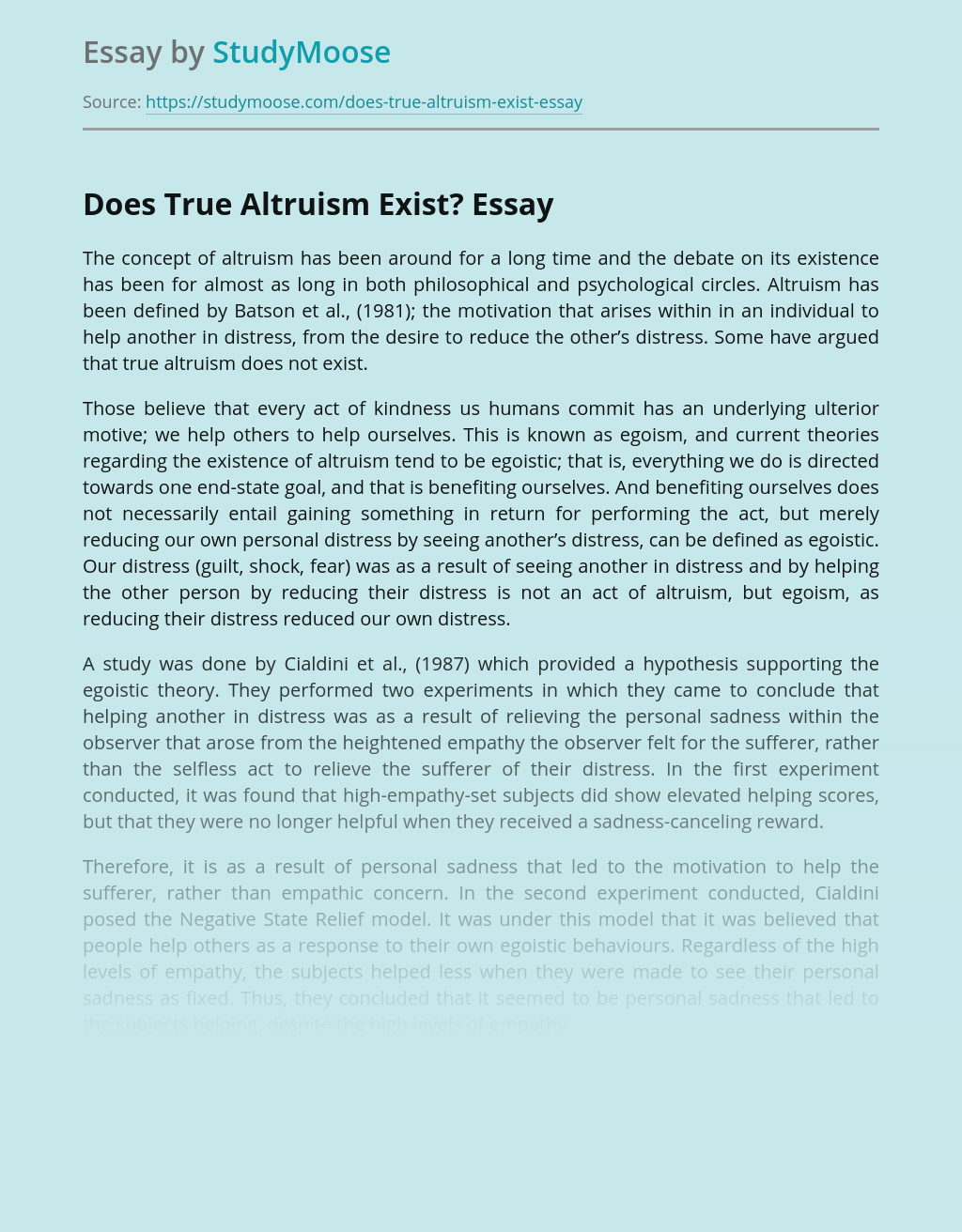