Contents of a dead mans pocket

Do you ever think about how a story can be really long and boring, well have you read “Contents of The Dead Man’s Pocket?” It may be long, but it is not boring. Jack Finny the author of the book “Contents of The Dead Man’s Pocket” is the kind of story you would not really be interested in but read anyways. The idea of this article is really that Tom may be a person who cares about a job and wife Clare, but tends to prioritize the two against each other in the wrong order just like in the story “you work too hard though, and too long” page 16.

Don't use plagiarized sources. Get your custom essay on
“ Contents of a dead mans pocket ”
Get custom paper
NEW! smart matching with writer

The story begins with Benecke tied up with work while his wife is getting ready to leave and attend a movie. Insisting that he must finish the work that he has spent a month compiling, Benecke allows his wife to leave alone. Upon her exit, a gust of wind blows the one page with his work out the window of his eleventh-story apartment above Lexington Avenue.

The paper lands too far beyond his reach, and because Benecke cannot duplicate all of the work he has completed, he climbs onto the narrow ledge; beginning what becomes a physically dangerous and emotionally agonizing journey to retrieve the paper. Finney delves into Benecke’s thoughts as the character fearfully edges along the ledge and comes close at one point to losing his footing when forced to look down.

Thoughts rush through Benecke’s mind of everything that he will not have a chance to do and how this may be the very last moment of his life.

To make the situation worse, Benecke’s window falls shut when he finally manages to get back to it with his paper. Attempting to gain the attention of anyone on the street below or in another apartment building, Benecke begins slowly emptying his pockets. When he has nothing but his yellow work paper left, Benecke realizes that the one thing he risked his entire life for would say absolutely nothing about him if he were to fall to his death. The detail with which Finney presents Tom Benecke’s torment creates strong suspense and allows a firsthand experience of the woe with which Benecke realizes what he has made of his life and what he should have done with that time instead. The main characters’ in this horror story are Tom Benecke and his wife Clare , who barely talks, but is a character, and those two are also the only characters in this story. Then comes the setting the setting is a huge building and a room inside it, which then moves to the ledge of a wall. The basic problem is that tom cares about his job a little more than his wife in general.

Contents of a dead mans pocket. (2016, Feb 21). Retrieved from http://studymoose.com/contents-of-a-dead-mans-pocket-essay 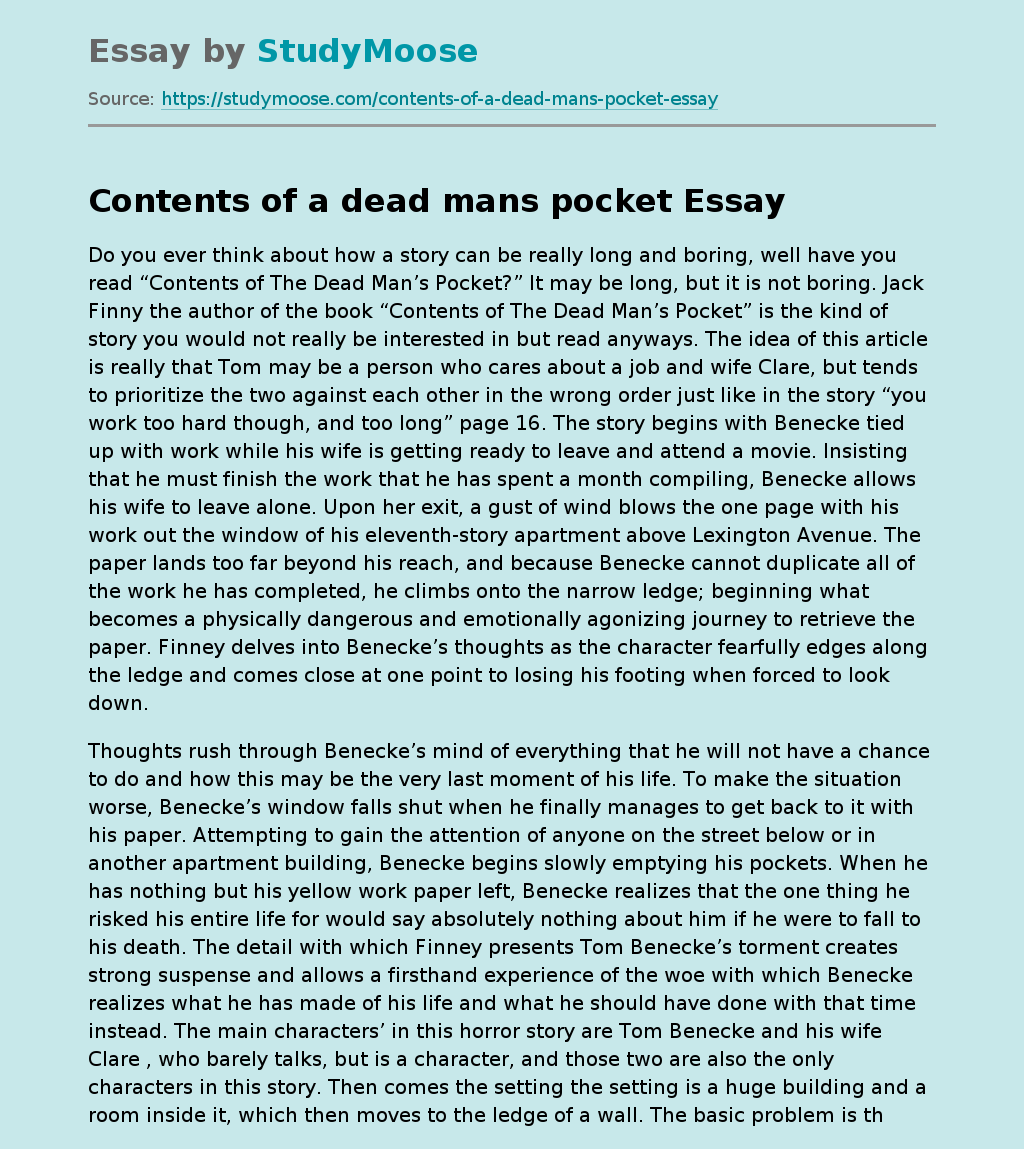