Jack London: The Law of LIfe

LALAJack London: The Law of Life
Culture is the expression of our nature on how we live, interact, believe, where we gain our knowledge, and it also distinguishes people from another in divergent societies. The culture of Native Americans is so history rich and storied cultured that it cannot be easily misinterpreted by anyone that is foreign of their way of life. In “The Law of Life,” Jack London describes the culture of the Native Americans and their proclivity towards life as it revolves around Naturalism and The Survival of the Fittest.

Don't use plagiarized sources. Get your custom essay on
“ Jack London: The Law of LIfe ”
Get custom paper
NEW! smart matching with writer

We can describe “The Law of Life” as the circle of life. The circle of life begins when a man is born and ends with his or her death. “Koskoosh thinks of the leaves turning in autumn from green to brown, of young girls that grow more and more attractive until they find a man, raise children and slowly grow ugly by age and labor (London, 389).” The cycle of life and death is always indisputable in life.

Death is a natural cycle as is birth; the distinction is how death occurs and affects a living creature. In the “Law of Life,” by Jack London, the law becomes acceptable to the tribe due to the nature of their survival in the harsh conditions in the artic regions. For example, deep and heavy snow may make it harder for hunters to bring back food for the tribe, or animals may go into hibernation to keep their young safe when they are vulnerable.

Whenever necessities are scarce, the tribe migrates from one area to another for food, shelter, medicine, livable weather conditions, move to habitats that are more hospitable, and the elderly and disability people are left alone so that they will not be a hindrance on the migration and the survival of the tribe. The availability of food and water can change throughout the year. When I first read Jack London’s short story “The Law of Life” for my assigned literature reading for English class, I was deeply impressed by Jack London’s writing style. Jack London’s sense of observation made his stories deeply realistic as if they were happening right before us as if we were in the characters shoes; therefore, the entire story gave us a mouth full of food for thought of what could possibly develop next. Jack London’s short story was based around how Naturalism affects everyone in their lives. Naturalism plays a magnificent part on the tribes that are faced to whatever situations in life that their heredity, social conditions, and environment prepare them to encounter.

“Naturalism in literature is explained as an attempt to be true to nature by not writing unrealistic stories about what life is like (Weegy).” Naturalistic writers try to show that man’s existence, is determined by things over which he has no control over and about which he can exercise little by if he has any choice. Man can only do nothing to prevent nature from taking a certain course; however, man does have the ability, to create protection from inclement weather, by way of: shelter, clothing, and supplies. Man is equal with all life and nature. We all eat, sleep, live, and eventually die. Many of Jack London’s stories talk about the constant struggle of surviving and staying alive. As discussed in class, nature doesn’t care who you are or where you come from; it is something that is continual and non-stopping. Man and the environment are both together in the struggle to compete for life. The aim is survival. Darwin’s Theory of the big fish that eats up the small fish, explains The Survival of the Fittest. Man and environment are both confronted between infinite, irrational Mother Nature and irrational human beings.

The arctic region weather is harsh and endless. In the horrid, cold weather, the man act like the wild animal; however, the wild animals live a less troublesome life of what the tribe members have to encounter. For example, the animals survive exceptionally by their natural instincts by avoiding any type of danger. Man usually is fated to death when they cannot support the tribe any longer. After death, man became part of the nature and joined the endless and everlasting process of nature. Unfortunately, an older man named Koskoosh is strongly affected by naturalism. He is slowly growing older and is losing his ability to keep up with the tribe as the days go by. The seasons are changing and therefore, the tribe has to migrate for food and Koskoosh is too impaired to make the trip and he may hold his family back. He understands that those who are weak, old and are not able to take care of themselves must move on with their lives and give up a place to the healthier and younger, living human beings.

Koskoosh knows what is in store for him since he has disabilities and won’t be able to benefit the tribe. He sits aside observing the tribe pack up making sure he isn’t a burden to them while they prepare for migrating. In the distance he listens to his granddaughter give commands to break camp. He only wishes for her to at least say goodbye to him. “Life calls her, and the duties of life, not death”. Koskoosh understands that if she slows down to visit with him it will jeopardize the health of the tribe, because they must follow the caribou. Koskoosh can also hear the cries of little Koo-tee who in his mind is a fretful child, and not over strong.” “He feels as though the child would die soon, again he is internally enforcing to himself that death will come to everyone (London, 389-390).” Despite the law, he still somewhat anticipates for an exception to himself since his son is the leader of the tribe. “He hears a soft footstep of a moccasin in the snow, and then feels a hand rest on his head. His son, the current chief, has come to say good-bye. Not all sons do this for their fathers, and Koskoosh is quietly grateful and proud. The son asks, “Is it well with you?” The people have left, the son explains, and they are moving quickly because they have not eaten well for some time. Koskoosh assures him that all is well, that he knows he is old and near death, and that he is ready. He compares his life to that of “last year’s leaf, clinging lightly to the stem. The first breath that blows and I fall.

My voice is become like an old woman’s. My eyes no longer show me the way of my feet, and my feet are heavy, and I am tired. It is well (London, 890).” “The son walks away, and now Koskoosh is truly alone. He reaches out his hand to check his woodpile and thinks about how the fire will slowly die out, and he will slowly freeze to death (Overview).” Koskoosh is expected to freeze to death, most likely, to starve, or to be killed and eaten by animal predators. It was a continuing tradition that he could not prevent. “It was easy,” Koskoosh thinks, all men must die (Overview).” It is the law of life. To abandon the weak was not only understandable but it was helpful to the existence of the whole tribe. While he did not complain about his fate, he became sympathetic to other living beings that were abandoned when the group agreed that they were no longer needed in the tribe; however, in his childhood he would not have given a second thought on leaving an old tribe member behind to fend for him or herself.

“He remembered how he had abandoned his own father on an upper reach of the Klondike one winter, the winter before the missionary came with his talk-books and his box of medicines (London 392)”. Left in the frozen weather where the snow and whole land is covered by an endless blanket of snow, he recalls doing the same thing to his father decades ago, throwing him away like a piece of trash. In his final moments, Koskoosh commemorates of a time when he was young with a friend, Zing-ha, and witnessed a moose fall down and fight his way back to standing ground where the moose succeeded in stomping one of the wolves to death. The moose fought until it was exhausted and overpowered by the pack of wolves. Koskoosh concludes that nature did not embrace whether a man lived or died; the continuing of the species was all that was to be substantive in “the law of life”. All things have a certain task to maintain in life, and all things after completing this task must die. The moose which fought to the very end is a symbol of foreshadowing of what happens to all living creatures; that all men must die and that this is what life is supposed to be.

While recapping those memories of when he was younger, he feels the cold, wet nose of the wolf on his bare, cold skin. His mind flashes back to the wounded, bloody moose from long ago that was taken down by the same creature. This time, more horrific memories are being brought up in his mind. The blood, the big yellow eyes and the barbed fangs of the pack, and the way they enclosed slowly on the moose, slowly easing up on their prey until the opportunity came to attack. His instinct for survival was to maneuver a flaming branch at the wolf to make him back away. The wolf retreats, but calls out to his pack, and suddenly there are many wolves gathered around Koskoosh in a pack. Koskoosh remembers the moose, remembers that death will come whether he fights against it or not. As content with death as he seemed to be, he is now fighting for his life, knowing he’s about to die. Koskoosh finally realizes what he is doing and that he probably really doesn’t stand a chance. “What did it matter after all?” “Was it not the law of life?” “Why should I cling to life (London, 394)?”

He then drops the stick into the snow and rests his tired head on his knees and waits for death to take him. In conclusion, all human beings eventually face eternal rest regardless of our cultures; it is the irrevocable of death. It is impossible to change or turn back life; it is like a river, no one can stop its flow. This is unfortunate, but nature is unforgiving, powerful, and knows no compassion. Koskoosh goes through his memories of his own life’s trials and misfortunes to try and give him an understanding of why he is sacrificing his life as an individual. He believes we are all going to face death and we will always strive to survive, no matter the odds in our favor.

Jack London: The Law of LIfe. (2016, Apr 07). Retrieved from https://studymoose.com/jack-london-the-law-of-life-essay 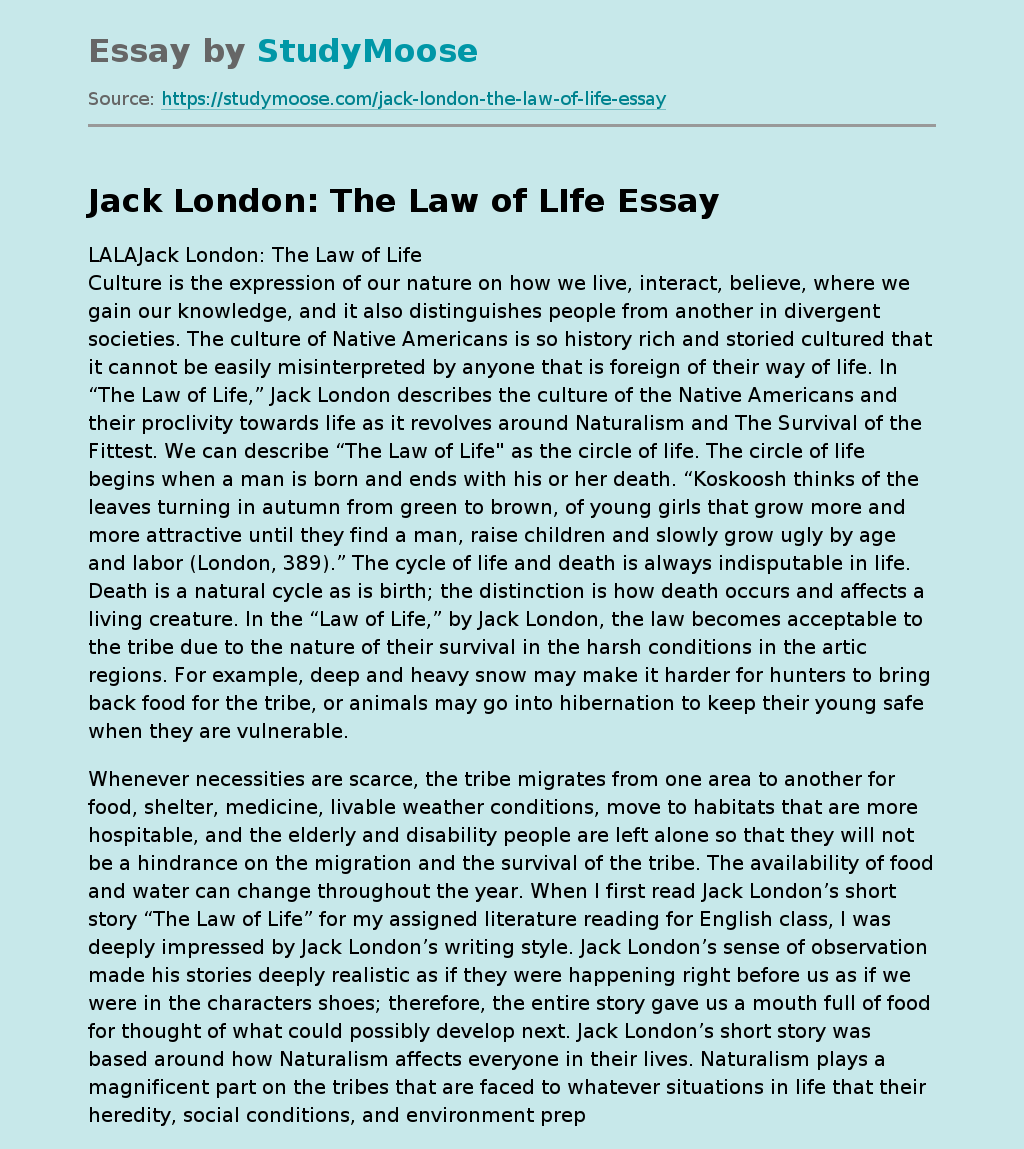