An Analysis of Jack London's Revolution

“The time should be past for the mental attitude: “Revolution is atrocious. Sir, there is no revolution. ” Likewise should the time be past for that other familiar attitude: “Socialism is slavery. Sir, it will never be. ” It is no longer a question of dialectics, theories, and dreams. There is no question about it. The revolution is a fact. It is here now. Seven million revolutionists, organized, working day and night, are preaching the revolution–that passionate gospel, the Brotherhood of Man.

Don't use plagiarized sources. Get your custom essay on
“ An Analysis of Jack London’s Revolution ”
Get custom paper
NEW! smart matching with writer

Not only is it a cold-blooded economic propaganda, but it is in essence a religious propaganda with a fervour in it of Paul and Christ.

” Final paragraph of Jack London’s ‘Revolution’, (1905). This extract from Jack London`s essay ‘Revolution’ was written during the 1905 Russian Revolution, which would culminate (and subsequently fail) later in the year.

The purpose of the essay is to persuade the reader that revolution is not only a necessary and positive occurrence, but also an inevitable one, ‘The revolution is a fact. ‘ The extract develops in conviction throughout, opening with an almost passive recommendation to the reader, ‘The time should be past for the mental attitude,’ and closing on the only imperative sentence used throughout, ‘Stop it who can. ‘ I do not believe that the two quotes within the extract are from any specific person, but that they represent the former opinion of the working class as a whole, ‘Sir, there is no revolution.’

This is due to London describing this as a ‘familiar attitude’, and also the use of Sir suggests a person of lower status. Alliteration and sibilance are used to make particular phrases more memorable to the reader, ‘Socialism is slavery… capitalist class. ‘ This may be subtle form of manipulation in itself, as phonetically the repetition of the ‘s’ provides a more pleasant sound than the harsh ‘c’, and communicates to the reader a more positive association for socialism than capitalism.

This negative association for the capitalist class is then reinforced through the use of legal jargon, ‘capitalist class had been indicted. ‘ An indictment is a formal written accusation of a criminal offence (this would have been handed up by a grand jury in 1905), which implies that London believes the Russian leader’s failure is so great it amounts to an offence against the state. It is also somewhat symbolic, as in essence ‘Revolution’ is an indictment, with the essay serving as the written accusation and the London and his audience the grand jury.

London uses many rhetorical devices throughout the extract, such as ethos, logos and pathos. Ethos relies on the reputation of the author or speaker, and London was one of the most successful writers of his time. I believe he was reasonably well known in 1905 (particularly as The Call of the Wild was published in 1903) and this would have given him the required credibility to successfully convey his opinion based on his name alone. He was also associated with socialism, having run (unsuccessfully) for mayor of Socialist Labour Party in his hometown.

Pathos is an emotive tool and the essay title ‘Revolution’ could be considered as such as it is a concept that has strong emotional connotation. Pathos is also employed somewhat through the analogy made between revolution and religion, ‘it is in essence a religious propaganda. ‘ London may have chosen the comparison as religion (if it can be considered movement) is very successful. The comparison is also of note as London himself was an atheist and fond of deriving the Christian religion, which may explain why he chose the post modifier ‘propaganda’ as it has negative connotations.

His lack of respect for religion is shown when the religious comparison is developed further, and the revolution becomes, ‘passionate gospel,’ with the ‘Brotherhood of Man’ revolutionaries becoming its followers. Logos is the logical element of rhetoric, and London presents a coherent argument as to why the revolutionaries would succeed. This begins with ‘Seven million revolutionists’ and ends with ‘with a fervor in it of Paul and Christ’. It is built of clauses and sentences that carry equal influence, arranged in a particular order that starts with fact and escalates into blasphemous hyperbole.

London uses inductive reasoning as this allows him to use particular facts to form a theory that explains the relationship between them, therefore allowing predictions of future knowledge as claimed at the end. Many specific types of rhetorical features are also present, all of which communicate London`s ideas and persuade the reader to agree with him. Chiasmus is used, ‘It has failed in its management and its management is to be taken from it,’ to encapsulates two important ideas into one sentence, connecting them and highlighting their significance.

London also uses a sentential adverb to interrupt the syntax, ‘The revolution is here, now,’ and this ensures the words ‘here’ and ‘now’ are stressed, as lexis either side of an apostrophe is emphasised. Antithesis is used to highlight a contrasting relationship between two ideas, ‘There is no question about it. The revolution is fact. ‘ By juxtaposing the simple declarative sentences in parallel form it appears obvious that something cannot be both a question and a fact, and placing ‘now’ at the end of the sentence provides it with the most emphasis and makes it more memorable.

There is also an example of tripling, ‘a question of dialectics, theories, dreams. ‘ This provides contrast, both semantically and structurally, to, ‘revolution is a fact,’ and the hypothetical nature of the former increases the strength of the latter. In conclusion I believe Jack London successfully communicates his beliefs in the extract, and the rhetorical devices used allow him to make the piece confluent and consequently persuasive.

An Analysis of Jack London's Revolution. (2017, Jul 07). Retrieved from https://studymoose.com/an-analysis-of-jack-londons-revolution-essay 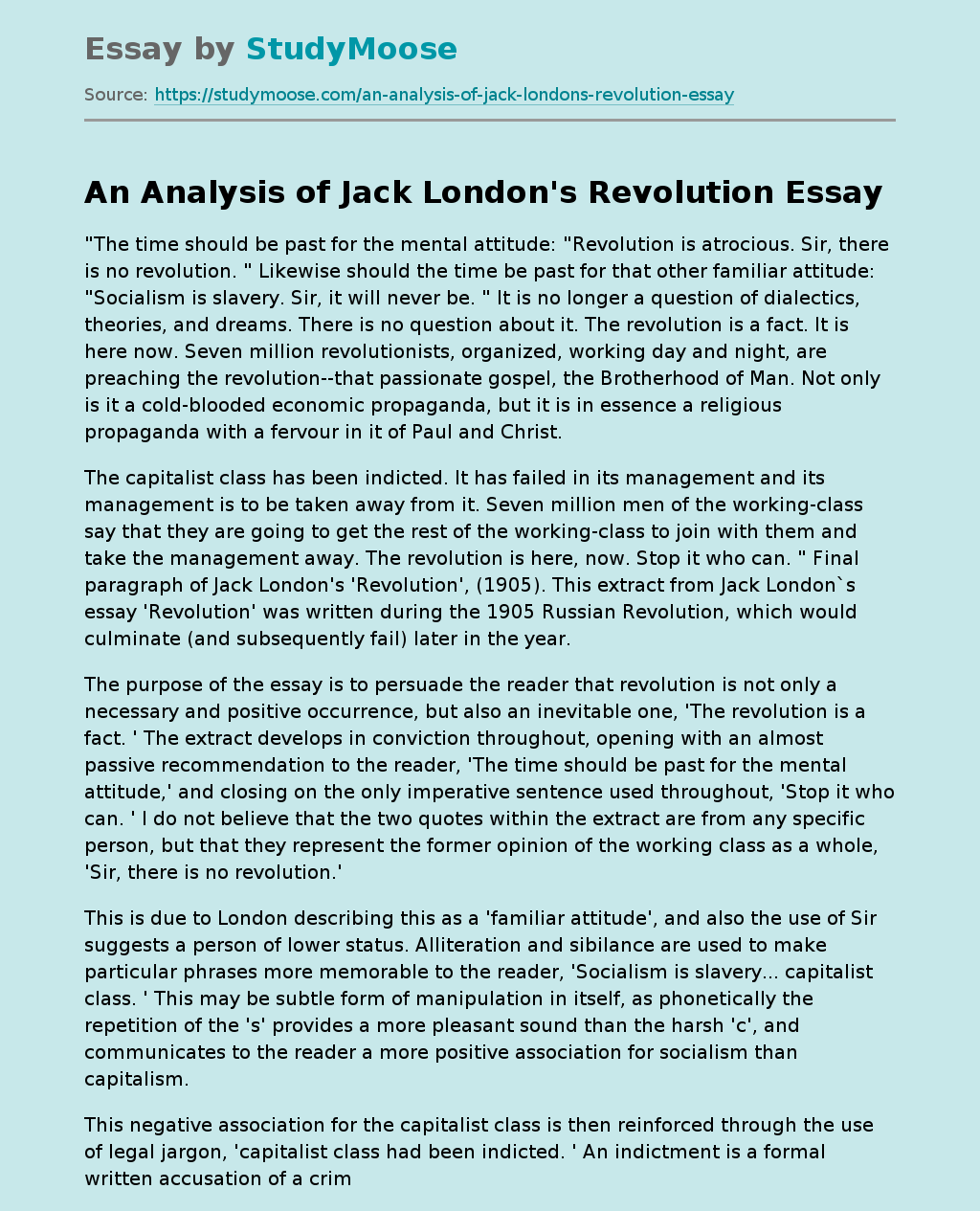