Based on real experiences, Jack London’s stories of high adventures have been appealing to millions of readers worldwide. With naturalism mode of fiction and a common topic – vigorous nature – in his works, the great author always took great care to depict his characters and the struggles with nature to expose man’s qualities in formidable situations. “To build a fire” is a good example. By creating a context of severe weather with white frost dominating throughout the story, Jack London was successful in portraying his protagonist Tom Vincent with all positive and negative qualities.

Don't use plagiarized sources. Get your custom essay on
“ Analyze the main character’s positive and negative qualities in “To build a fire” ”
Get custom paper
NEW! smart matching with writer

The character’s positive qualities were revealed from the beginning of the story. In the first page, readers can easily perceive that Tom Vincent was a strong man. The protagonist was described as “a strapping young fellow, big-boned and big-muscled, with faith in himself and in strength of his head and hands.” With good descriptive words, the writer created a vivid picture of a young man who was strong both physically and mentally.

He was brave and always ready to cope with difficulties with a firm belief in himself. He did not hide from the severe elements; instead, “he was out in it, facing it, fighting it”.

Furthermore, Tom Vincent was a smart and clear-headed person. He knew how to protect himself in the freezing weather. Realizing the biting cold, “he leaped to his feet and ran briskly up the trail”; also, he rubbed his nose and cheeks till they burned with the returning blood, which made him warmer.

When he felt the cold water strike his feet and ankles, he knew “the thing to do, and the only thing to do, was to build a fire”. Though failing to set a fire many times and almost hopeless with his numb hands, Tom Vincent could keep his mind sound enough to come up with the idea of burning his hands to regain their feeling and continued to build another fire. Obviously, Tom was a man who could react to difficult situations quite flexibly and smartly.

The most remarkable quality of Tom Vincent is his strong survival instinct with great patience and perseverance, which was vividly described through the character’s continuous attempts to build a fire in freezing weather. When Tom was aware of his dangerous situation, he didn’t think so much but concentrated on building a fire – the only thing that could save his life at that moment. In the first attempt, he kneeled down to kindle his fire. Despite his unmittened stiff fingers, he told himself not to hurry things and cherished his fire with the utmost care. However, the frost forced him to suffer more. His young flame, his little light of hope, was soon buried under the snow that fell down from the pine boughs. In spite of the fear and panic growing larger and larger inside him, he kept his presence of mind. He did not allow himself to be overwhelmed by the adversity and started at once to rebuild the fire. Unfortunately, he failed at the very beginning when he dropped the match in the snow and could not pick it up again with his numb fingers. Desperate, but he, though painfully, stood up, stepped to one side to avoid being disturbed by the falling snow from the pine boughs, “beat his hands violently against a tree-trunk”, and made another attempt.

Still, the aggressive elements kept troubling the miserable man. Tom’s tiny flame was quenched one more time in his shaking hand due to the severe cold. After consecutive failures, Tom virtually collapsed with despair, but quickly, he ran up the trail to look for help. He still believed there was another solution available somewhere. Even when he had recognized that there was no help, no sign of help but the emotionless white frost and the brazen silence, his hope of being rescued promptly ignited again when his eyes chanced upon another high-water lodgment of twigs and branches. He started over to build a fire! He tried to overcome the condition of numb hands with all fingers straight out by “pressing the wrist of the other hand against them” and finally managed to ignite the match. Regrettably, the flame burned into the flesh of his hand, which made him involuntarily relax his hold and helplessly watch the match fall into the snow. The fire went out. Again, he ran, in his most terrible panic, but the only thing he could find was an empty shelter of moose-hunters. This time, he felt so badly frightened that he sank down and sobbed, nearly accepting that everything was over. When all the doors seemed to be closed, his love of life burned strongly than ever. He “sprang again to his feet”, thinking quickly, and found out a way to save his life – burning his hands to regain their sense. He set his teeth to bear the pain caused by the fire licking his flesh. Apparently, that he writhed around with the torment, yet held on the fire, was the greatest evidence of his tough survival instinct. The heroic measure and the amazing bravery to act over the extremity saved him from death. Through Tom Vincent’s continuous attempts to build a fire, readers can see clearly the character’s durability and iron will. Despite the severe hardship, he made great efforts; despite the great efforts, he made continuous failures; despite the continuous failures, he always gave himself another opportunity to survive.

Beside the positive qualities, readers could see the presence of negative traits in the character’s personality, which brought him very close to death. Tom Vincent was exposed as an overconfident, subjective and arrogant young man. Ignoring the precept of the north, “Never travel alone”, Tom, by himself, started his journey in a severe weather condition with just a light pack on his back, a pair of moccasins on his feet, and an over-optimistic attitude on a new, strange and lonely route. At the beginning of the journey, he was swinging along the trail and enjoyed it with all his great excitement. He was fearless with the thought that “there was no possibility of getting lost” and considered a nose-strap “feminine contraption”. Although the nature did warn him of its killing freezing cold, Tom enjoyed the exultation with a complacent attitude. He assumed that he was stronger than the elements and considered himself as master of the elements. “He laughed aloud in sheer strength of life, and with his clenched fist defied the frost”. It was his overconfidence that made him take all miseries afterwards.

Tom was a strong and smart young man; nonetheless, it was not enough for him in the fight against the cruel nature. In the dual with Mother Nature, he was just a child. He failed to estimate all dangerous accidents that did happen to him during his journey. First of all, he hadn’t known how harsh the weather was and afterwards felt the need of a nose-strap that he had scorned before. Moreover, he built a fire under a pine tree with snowy boughs that blotted out his flame. Also, he couldn’t imagine that his hands and his body would become such numb and worthless ones that prevented him from building a fire. Ultimately, he regretted ignoring the precept of the north and wished to have a comrade whose feet were not freezing to start a fire that could save him. After experiencing continuous bitter failures, Tom, a strapping man, sank down and sobbed like a child. Jack London was successful using contrast to paint his character: one arrogant at the beginning and one miserable at the end. Through that, the author showed us the consequences of his character’s shortcomings. Though thinking that Tom Vincent deserved to pay for his arrogance, readers feel sorry for him. If he had been a good listener – traveling with a companion or starting the journey in a better weather condition, he wouldn’t have fallen into such a life-threatening situation that nearly took his life away.

The story ended with a Tom Vincent surviving but totally different from the Tom at the beginning. He became “sensitive to frost” and “lays down the precept of the North”. He finally took a bitter lesson from Mother Nature. After analyzing the character’s positive and negative qualities, we can learn valuable lessons: a will of iron is a weapon that helps us overcome difficulties in life, even in the worst situation; however, never underestimate potential risks around us, and be a good listener. A man with all good qualities like Tom Vincent could be a very successful person in the modern world today; nevertheless, it is the arrogance that will destroy all his success. Hence, a man can succeed only when he understands the rules of nature and the rules of life to take appropriate actions in all adventures during his life.

Analyze the main character’s positive and negative qualities in “To build a fire”. (2016, Mar 07). Retrieved from https://studymoose.com/analyze-the-main-characters-positive-and-negative-qualities-in-to-build-a-fire-essay 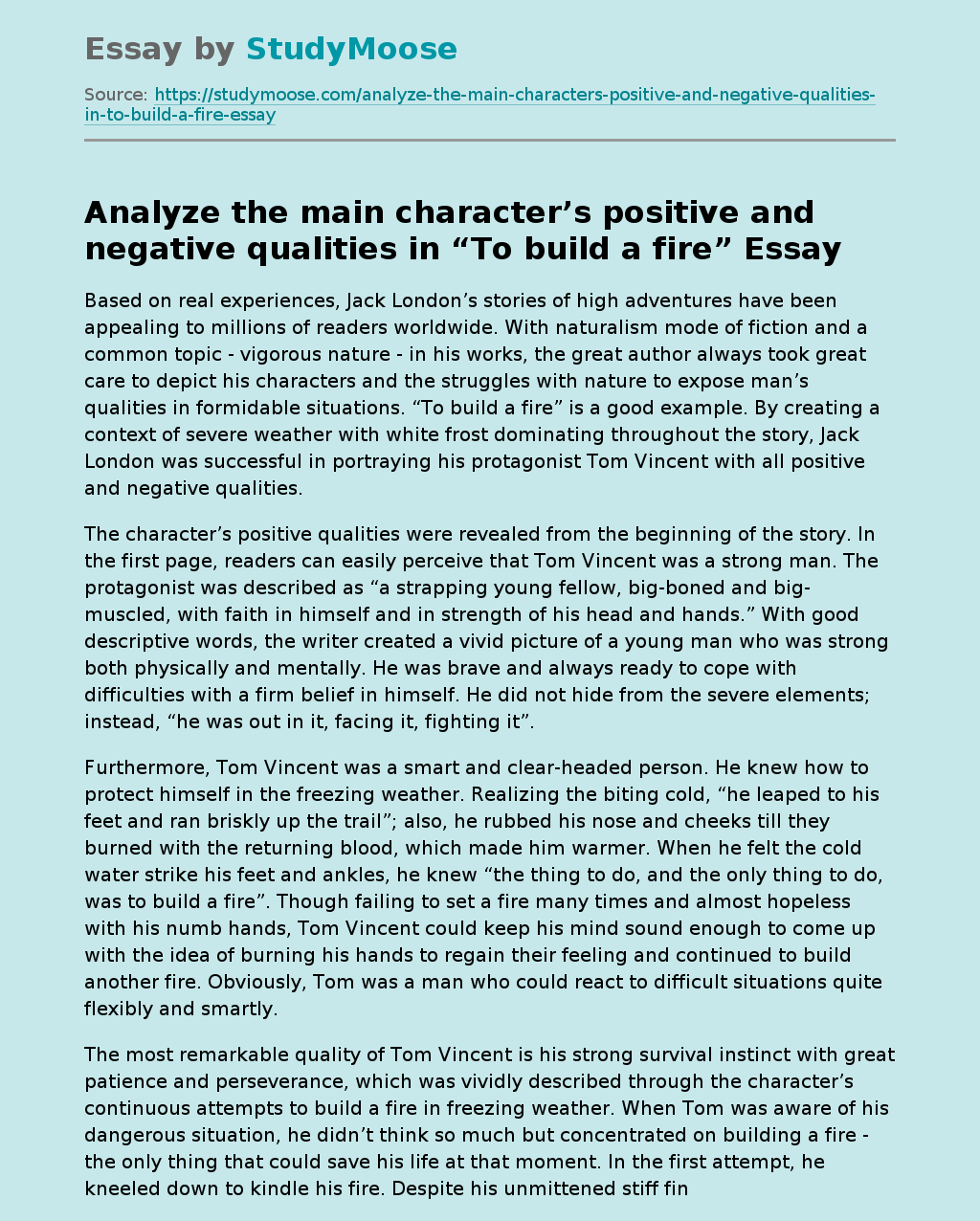