Jack London was an American author who wrote quite a few books. The main focus of this paper will be on White Fang one of his more popular books. Jack Londonââ‚¬â„¢s White Fang exhibits his naturalist way of thinking, when discussing how the environment and natural world around him is able to raise society and exhibit the deeper truths. Throughout the book there are many references to naturalism with the use of symbols and metaphors. He also uses survival of the fittest and romanticism as major themes.

Don't use plagiarized sources. Get your custom essay on
“ Analysis Of White Fang By Jack London English Literature ”
Get custom paper
NEW! smart matching with writer

Jack London wrote many books with Darwin’s popular ideas in mind, particularly White Fang and The Call of the Wild. The process of “natural selection” means that only the strongest, brightest, and most adaptable elements of a species will survive. This idea is embodied by the character, White Fang. From the onset, he is the strongest wolf-cub, the only one of the litter to survive the famine. His strength and intelligence make him the most feared dog in the Indian camp.

While defending Judge Scott, White Fang takes three bullets but is miraculously able to survive. One element of the book one might overlook is White Fang’s ability to adapt to any new circumstances and somehow survive. He learns how to fight the other dogs, he learns to obey new masters, he learns to fight under the evil guidance of Beauty and, finally, he learns to love and be tamed by Weedon Scott.

White Fang was written during the courtship and marriage of London to Charmian Kittredge and a romantic theme is part of the novel.

Part V reflects how love can tame natural behavior and instincts. As White Fang learns to love Weedon Scott, this love produces a desire in the dog to do anything to please his “love master.” This includes having Weedon’s children climb and play with him, and learning to leave chickens alone, although the taste was extremely pleasing to him. Just as White Fang was tamed by love, Jack London was tamed by love as he began staying away from the whorehouses in San Francisco and trying to overcome a severe drug habit.

The Wild is a dominant symbol for the perilous nature of life. The Wild symbolizes life as a struggle: for example, the Wild is a place in which the sun makes a “futile effort” to appear (I.2). White Fang himself is a symbol of the Wild (IV.1). The Wild is, for White Fang as a pup, the “unknown” (II.3)-and he, in turn, becomes the embodiment of the “unknown” for others (V.3). And yet the Wild is not a wholly negative metaphor in this story, for the Wild gives White Fang much of his strength. For example, in the final chapter, as he is struggling for life, White Fang is able to survive when other animals may not have, for White Fang, we are reminded, “had come straight from the Wild, where the weak perish early and shelter is vouchsafed to none. A constitution of iron and the vitality of the Wild were White Fang’s inheritance” (V.5). The Wild is thus a multivalent metaphor in White Fang, but tending to express the power of life to survive and even thrive. Like the Wild, the life force cannot be completely tamed.

Light is a common symbol for life in the world’s literature, because light is, of course, a physical necessity for life. Light’s symbolic function in White Fang proves no exception. In II.3, for instance, we read that as the young pups starve, “the life that was in them flickered and died down,” and that White Fang’s sister’s “flame flickered lower and lower and at last went out.” In that same chapter, however, the “wall of light”-the entrance to the wolves’ lair-is a symbol for living in the larger world. Life is as precarious as a flickering flame, yes, but it is also persistent: “The light drew [the cubs] as if they were plants; the chemistry of the life that composed them demanded the light as a necessity of being.” Similarly, the light and warmth of Gray Beaver’s fire attracts White Fang (III.1). Readers will note other examples of light serving a symbolic function, because light is equated with life, and the persistence of a life is a dominant theme of the book.

Clay is a metaphor employed several times in the book to describe the “raw material” of a person or animal’s makeup. It is the metaphor London chooses to use to address the perpetual debate about the relative importance of “nature” and “nurture” in determining identity. London offers three clear examples of characters whose clay has been harshly molded through harsh experiences (which can only be called “nurture” for the terms of the argument): Beauty Smith, Jim Hall, and White Fang. Interestingly, Smith and Hall seem beyond “redemption”: Smith runs away into the night after White Fang attacks him (IV.6), and Hall is killed by White Fang (V.5). Only White Fang is “redeemed,” and that occurs through a nurture that is worthy of the name: Weedon Scott’s love of the animal. The key passage, perhaps, occurs in IV.6, when we are told explicitly about the two very different “thumbs of circumstance” that have worked their way on the clay of White Fang’s character-first, an oppressive thumb that turned him into a vicious and savage fighter; last, the loving thumb of Weedon Scott that helped him transform into “Blessed Wolf” (V.5).

One central theme with which London seems preoccupied in White Fang is the theme of the nature of life. The theme was much on the minds of 19th-century readers and thinkers. In 1859, Charles Darwin advanced ideas that came to be popularly understood as “survival of the fittest”-that life was a struggle, and that only the powerful and strong survived (and, in some applications known as “social Darwinism,” perhaps only they deserved to do so). About a half-century later, London publishes this novel, which may be read as a “taking to task” of such “social Darwinism.” London’s story seems to posit that life is more than a “bleak and materialistic” (III.5) struggle where only power matters. The “redemption” that White Fang undergoes at Weedon Scott’s instigation suggests that the greatest power in life is the power of love.

This theme connects quite naturally, then, with another key theme. If London’s novel explores the meaning of life, it also quite clearly explores the meaning of civilization. One way in which it does so is through the character of Beauty Smith. Beauty Smith stands as an argument against the misrepresentations of Darwinism noted above-i.e., the justification of the weak and powerless’ exploitation at the hands of the strong and powerful; and an attempt to free individuals from the responsibility to exercise their own volition by an appeal to a pre-determined destiny. We are told that Smith is the product of harsh experiences. Like White Fang, his clay has been roughly molded. Even so, Smith has had and presumably still has choice about how to respond to his environment-a choice, for instance, whether or not to “vindicate” his existence by tormenting men and beasts less powerful than he. White Fang, in order to survive, does not. This marks the sharpest contrast between the two characters. It also heightens the novel’s overarching reflections on the struggle of life, however, for even as Smith is wrongly exercising his power, White Fang is rightly exercising his to continue to live: “He had too great vitality. His clutch on life was too strong” to continue to resist Smith. Ironically, he demonstrates power through submission. Thus, if Smith truly were a civilized man, he would know to treat White Fang better.

London has raised this question earlier in his novel, of course. In II.5, for example, he introduces “The Law of Meat.” By laying bare the often brutal dynamics of life in the Wild, London is holding a mirror up to us, giving us the opportunity to see those dynamics at work in us, for good or for ill. Do we recognize “the law of meat”-“EAT OR BE EATEN”-when we see it, and do we adhere to it ourselves, or strive to adhere to a higher law, a law that requires us to curb our instincts for a greater good? 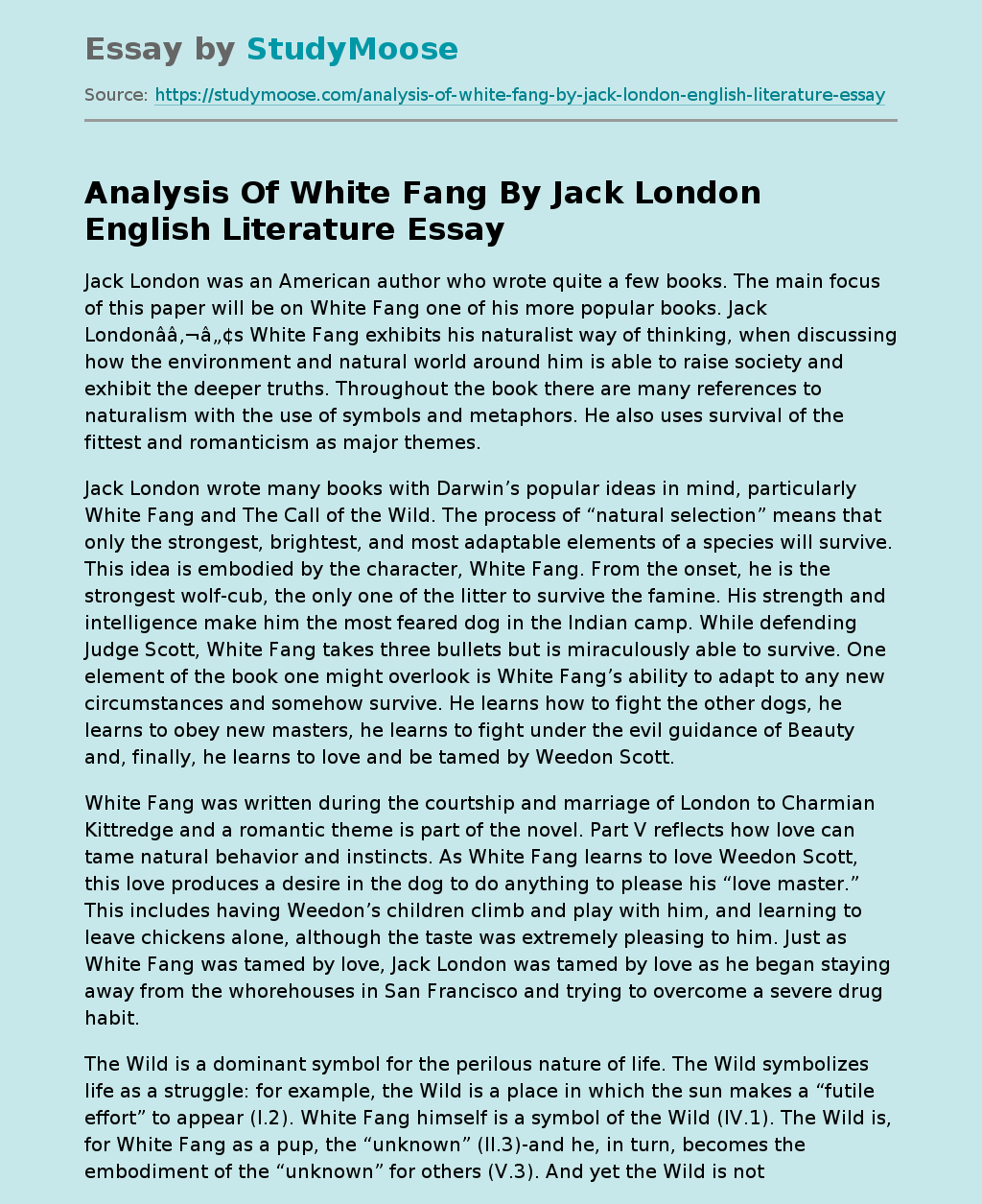