In Jack London’s To Build a Fire the setting of the short story plays a significant role. Jack London uses specific techniques to establish the atmosphere and tone of the story. By introducing his readers to the setting, London prepares them for a tone that is depressed and fear-provoking. Isolated by an environment of frigid weather and doom, the author shows us how the main character of the story is completely unaware of his surroundings. The only world the man is actually accustomed to is the world he has created for himself.

Don't use plagiarized sources. Get your custom essay on
“ Jack London’s “To Build a Fire” -Analysis ”
Get custom paper
NEW! smart matching with writer

Since many of us have never been exposed to such a harsh climate, London’s account that the environment is the determining factor of his survival paints an accurate picture. Anything that the man and his dog come into contact with creates an expectation for disaster in the story.

The significance of the words ‘dying and death’ in the story continuously expresses the man’s dwindling warmth and bad luck in his journey along the Yukon trail to meet his friends at camp.

London associates dying with the man’s diminishing ability to stay warm in the frigid Alaskan climate. The main characters predicament slowly worsens one level at a time finally resulting in death. London places a strong emphasis on the setting in the introduction to the story. “Day had broken cold and grey, exceedingly cold and grey…” He repeats these phrases to emphase to the reader the impact the setting has on the lives of the characters.

The gloominess of the setting causes the man and his dog to fight a constant battle in a world of depression. Lacking the virtue of imagination, the man is only gifted with his practical knowledge. This ignorance will hamper his ability to adapt to the conditions and stresses surrounding him.

Typically the man never wants to deal with reality especially when the reality is unpleasant. “But all this-the mysterious, far-reaching hairline trail, the absence of sun from the sky, the tremendous cold, and the strangeness of it all- made no impression on the man.” He is able to tolerate the troublesome temperatures and climate he is surrounded by, he never attempts to face monster within him. Facing what he would do if the inevitable were to happen is this mans worst fear. This fear causes the man to become selfish, only focusing on the actions and thoughts that are pleasurable to him. The man’s ignorance to his surroundings and self-indulgence foreshadows a possible downfall.

London provides us with subconscious hints that lead the reader to believe that the man will suffer a tragedy in the end of the story. Only relying on his previous experiences causes the man to be a disadvantage to his dog. A dog by nature is an animal that has the natural gift of instinct. Under these bitter conditions, the dog was capable of survival because of those instincts. The dog follows the man throughout his ill faded journey, but after the man succumbs to the weather, the husky relies upon his instincts to survive. Being placed in this type of environment is the main conflict of the story for both the main character and the dog.

Relying only on his judgment, the man can not prepare to prevent a disaster from occurring. London’s constant focus on the how the environment affected the man and his reaction to being unable to survive like his dog gives the reader certain hints. At this point London has already given an insight to the conclusion of the story. The theme of London’s ‘To Build a Fire’ is how we should all take heed to modern knowledge and learned behavior has its benefits, but our primal instincts should never have ignored. The man in the story had lots of knowledge but neglected to pay attention to his ‘sixth sense.’ The dog on the other hand, followed as long as he could but then let his instincts carry him to safety. We can never have enough knowledge to replace the survival skill that nature has provided us.

Lured in by the plot of the story the reader keeps on reading, waiting in anticipation of the danger of the climate to overcome the man. “On the other hand, there was no keen intimacy between the dog and the man. The one was the toil slave of the other, and the only caresses it had ever received were the caresses of the whip lash and of harsh and menacing throat sounds that threatened the whip lash.” Although the dog was obviously anxious, he was unconcerned with the safety of the man. If the man was to come upon serious danger, the dog would not be willing to help him. Not being concerned with anything somewhat inventive, the man put himself in a position to anticipate death. His selfishness and ignorance keeps him in a situation of danger and disaster.

The climax of the story is when the man falls through the ice, wetting himself up to his knees. Preparing himself in advance might have prevented the man’s accident in the water. The man ignorance once again caused him to be unprepared for this kind of situation. The man never took the proper precautions because he never thought of how to cope with a deadly situation. The only help he was given for a similar situation was the advice of an old timer from Sulphur Creek. Viciously, the man attempted to stop his appendages from freezing, but was unsuccessful as the dog watched.

London’s portrayal of the man does not initially give the reader the theme of dying, but slowly develops the theme as the story develops. The story doesn’t mention death until the last several pages. The main character changes from an enthusiastic pioneer to a sad and desperate man. The conclusion of the story portrays the man accepting his fate and understands the old-timer at Sulphur Creek had been right; “no man must travel alone in the Klondike after fifty below.”

Using characterization, London is able to present why certain people are alive at the end and how one benefits from being social. The old-timer at Sulfur Creek is alive because he is experienced and wise enough to benefit from others’ experiences that it is not wise to travel alone in the Yukon. The boys at camp are also alive because they are together and can benefit from each other. The man’s husky is alive because it is well-suited for the Yukon environment, while the man is not. Unlike the other characters, London has the man die at the end of the story to illustrate that he dies because of his arrogance in his ability to travel alone. If the man travels with a companion or a companion of equal instinct, he can benefit from him and possibly return safely to camp.

In the opening paragraph London presents us with a scene that is gloomy, depressing, and ominous, these elements foreshadow an outcome that will be fatal to our protagonist. Our man has no name, but he does not need one, he could be any man that has bitten off more than he can chew; he does not considered the consequences of his actions until it is too late. By then there can be no return, he has crossed the line that cannot be uncrossed, because he trusts his intellectual thought process, not paying attention to man’s intuitive thoughts, the instinctual ones that some men consider less valid because they come from the unconscious mind. His unwillingness to contemplate the extreme cold, the barely used trail, his dog’s instincts, reflect the man’s inability to view the whole picture. As London puts it “the man had no imagination” he thought only to keep moving and stay dry, then he would be fine, however the man in the end could do neither. 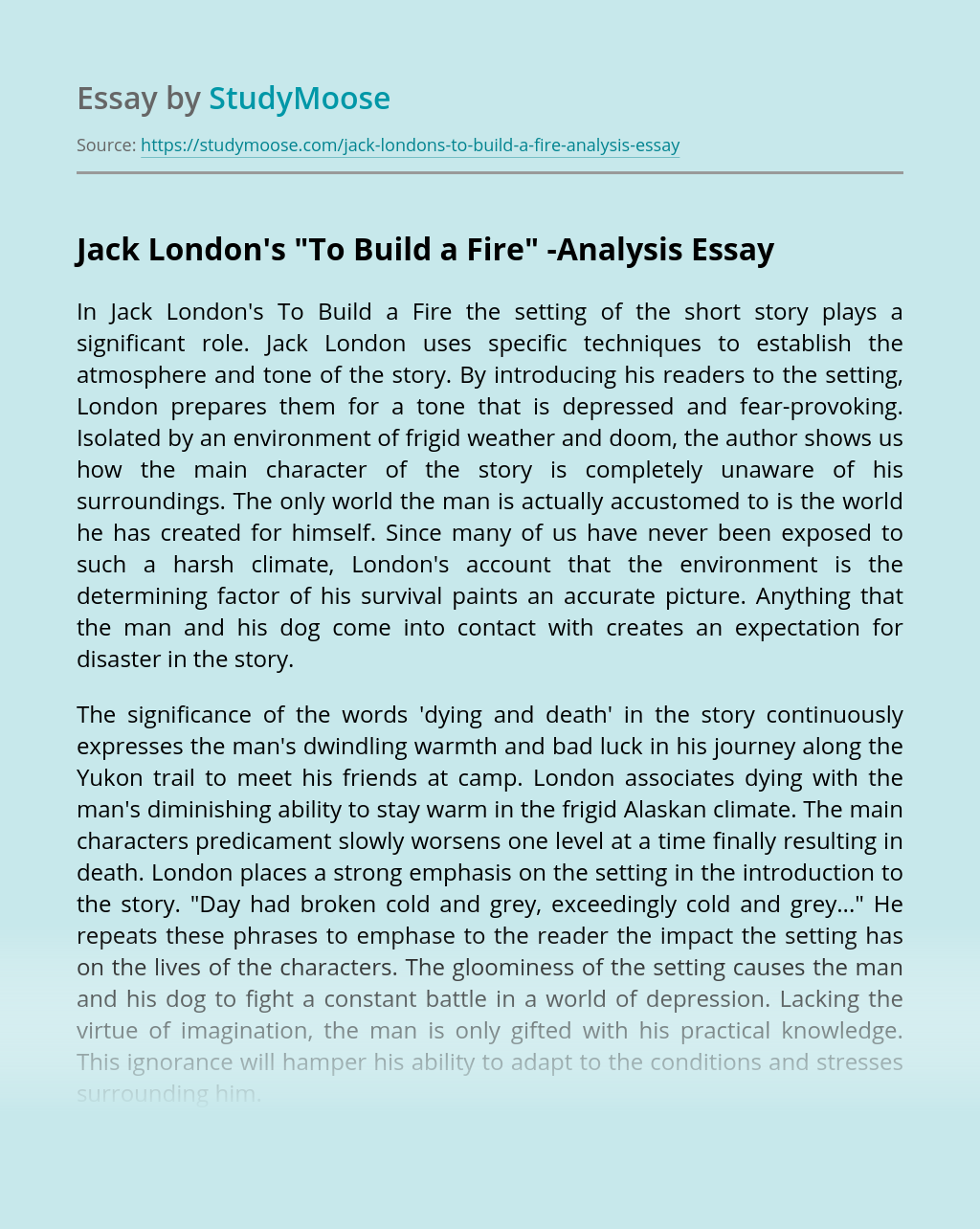