What does Jack London mean by "The Love of Life"?

Many people today could easily say that they loved and appreciated life, that living in this world was a privilege that they would do anything to maintain. Through a story called “The Love of Life”, Jack London demonstrates what the true definition of loving life is like. He does not illustrate the “love of life” as something simple and pleasurable, but as something that is excruciating. London uses the phrase “love of life” with the definition of the will to survive, and the appreciation and love for life.

Don't use plagiarized sources. Get your custom essay on
“ What does Jack London mean by “The Love of Life”? ”
Get custom paper
NEW! smart matching with writer

“The Love of Life” is a brief, yet remarkable story concerning two men who sought out to the frigid, arctic Yukon in search of some gold. They had accomplished their task and earned each of themselves fifteen pounds of gold.

The two companions were heading for “the land of little sticks” for supplies when one of the men finds himself with a sprained ankle. He calls for his partner, Bill, to help him but finds no assistance.

“‘Hey, Bill! Bill! I’ve sprained my ankle.’ But Bill continued to stagger on through the foaming water.” Instead, Bill kept on walking, and eventually abandoned him. Alone and devoid of supplies, the man’s “love of life” will now be put to test by nature.

It is the wish of every living thing in the world to stay alive, as is the man’s. He, however, was willing to risk more than what others would in order to fulfill their wishes. This man wanted to live under any circumstances, he wanted to stay alive, and he fought for it.

“He did not stop. Madly, desperately, disregarding the pain, he hurried up the slope toward the top of the hill over which Bill had disappeared.” His will to survive had confined his brain from his knowledge of the pains that throbbed in his stomach and the frigidity which filled his entire body. His “love of life” had made him stubborn, and yet it was this obduracy that kept him alive and strong.

An often overlooked challenge in life is the ability to provide food for ourselves. Many of us have utterly no trouble getting the food we need in order to survive. However, we must also take into consideration that many people out there in the world do not have the ability to feed themselves. These people do not consider food as an enjoyment, but as a way of survival. The character inside “The Love of Life” also felt the same way while he was struggling in the Yukon. He could no longer decide on what does into his stomach. Instead, he had to consume whatever he could find. “The man knew there was no nourishment in the berries, but he chewed them patiently anyway.” He knew that the berries were no of much help to him, but he also knew that he had to eat something. It was his “love of life” that obliged him to eat anything that was obtainable to him.

As a student and resident of California, it is difficult for me to ever thoroughly comprehend the feeling of being in a freezing, desolate place where survival was only thing that possessed significance. However, I can somewhat relate to the experience of being extremely cold, although the pain I undergone was only a fraction of the pain that the character inside “The Love of Life” had experienced. Around a year ago, I had gone snow camping for 2 days. I was ecstatic when I arrived at the camp, not aware of the dangers of not having proper equipment and clothing. So, I started running around and throwing snowballs at my friends.

Around thirty minutes later, I realized that an excessive amount of snow was gathering in my boots since I had accidentally bought larger snow boots than what I needed and did not bother to exchange for a pair of smaller snow boots. Shortly, the snow melted and the ice water surrounded my feet, giving me a painful and torturous feeling. My feet became so icy that they lacked feeling with each step that I took. During that whole day, my whole body was freezing. An urge keeps on coming to me, telling me that I should just go in the car for warmth and give up. However, I went on and tried my best. In the end, it all paid off.

As we have learned, the “love of life” of one person can be something with power beyond imagination. It can make a desperate person perform tasks that no one would have ever thought of. Jack London portrays his definition for “the love of life” through the characters in this story. The unnamed man was of great courage, for he did not give up on life. His “love for life” kept him going, because he knew that every step he placed into the snow counted, and that each was a step closer to survival.

What does Jack London mean by "The Love of Life"?. (2016, Jun 19). Retrieved from https://studymoose.com/what-does-jack-london-mean-by-the-love-of-life-essay 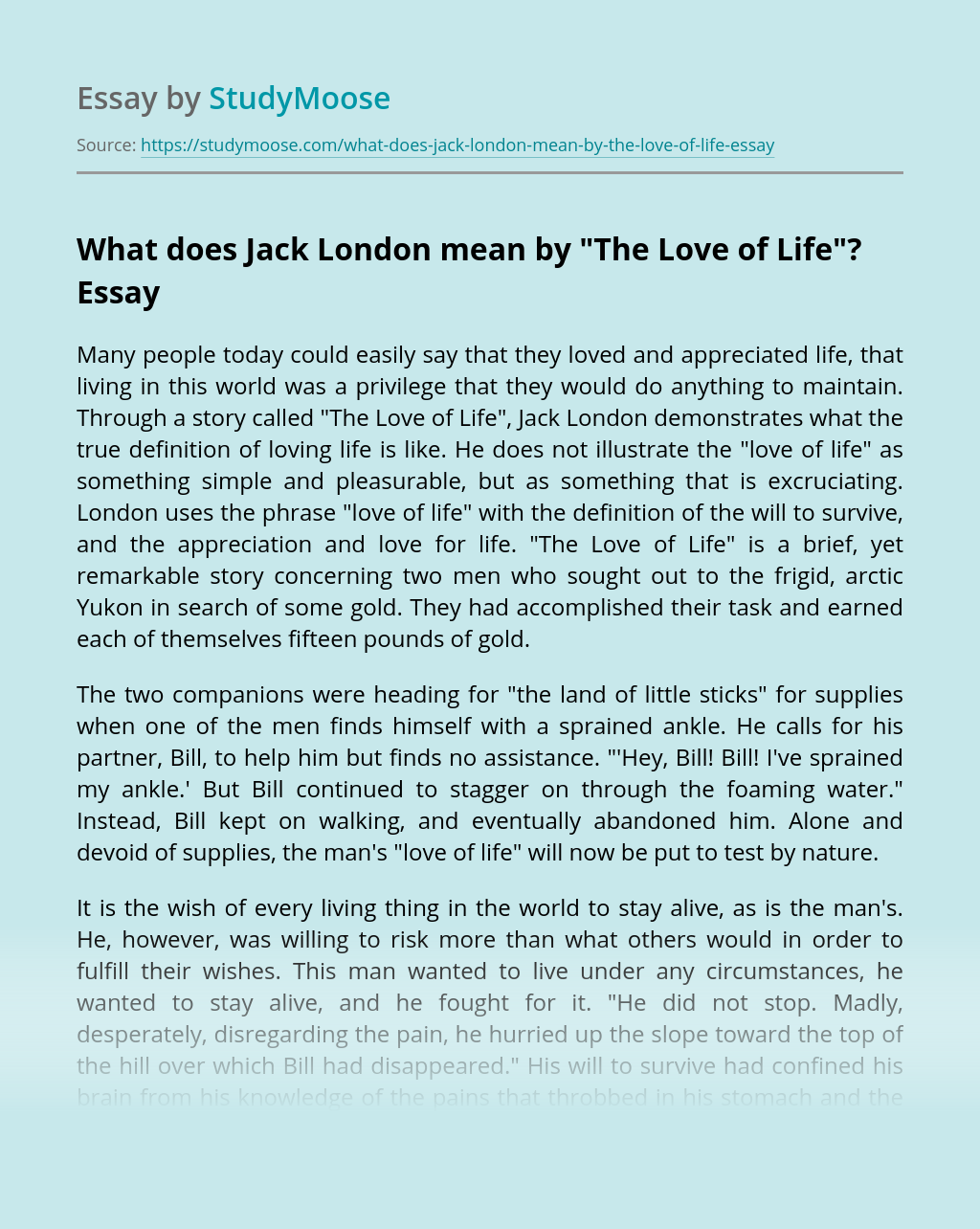