Conflict Between Science and Religion

Don't use plagiarized sources. Get your custom essay on
“ Conflict Between Science and Religion ”
Get custom paper
NEW! smart matching with writer

It is difficult for me to choose which side to be on. I believe in religion, but also feel science is true but with its limits.

History tells us the two have always been in conflict since the beginning of time; religion reigned supreme in every life, but science slowly took its place. Today, science if more important than religion. Science tells us, the first cause is unknowable. But religion says it can be discovered though religious discipline, as God is self-revealed not self-existent.

Science is a rational. It believes only on observations and experiments. Through sciences’ teachings, we learn not to believe until it is proven to be true via experiments. Religion, on the other hand, is faith, teaching us to believe and have faith in religious books and teachers.

Hence all writings; the ‘Bible’, the ‘Gita’ and the ‘Kuran’ is all true as they are the Gods words. Gods’ existence cannot be proved, but felt through faith. It’s all a matter of faith, not experiments or observations.

Science believes that nothing is true, but the truths are tentative. What is right today can be proven wrong the next hence begins experimentation and observations. At one time Earth was supposed to be motionless and the sun goes round it. A time came when science proved it wrong and showed that Earth goes round the sun. Likewise, Newton’s gravitational laws held the days till Einstein came up with the theory of relativity.

This way science advanced toward truth as absolute. Religion and religious books are absolute truth. Criticisms of these teachings are violently condemned and know to be a heretic. In the past, those questioning religion were mercilessly punished and mistreated. Galileo’s example comes to mind during the controversy over heliocentrism and geocentrism, between the Catholic Church and empirical scientists. Galileo had many controversies, but the star that got him into trouble was the idea that the sun orbiting the Earth. Older views, inherited from Ptolemy, was that the sun and all heavenly bodies around the Earth, the centre of the universe.

Later churches found explanations for geocentrism in Christian scripture: “You have established the Earth on its foundations; it cannot be moved”. (Blackwell, 2002). But the Churches and Galileo’s conflict was not allegiance to literal interpretation of the Bible. Science advances from particular to general principle and laws. As a result, Newton saw an apple falling. He observed numerous similarities and phenomena and on his basis of observation developed his famous gravitational laws. On the other hand, religion works from the general to the particular, with entirely different methods compared to science.

Scientific theories are based on a much sounder foundation than the religious principles. Religion has lost ground since the advance of science. Truth has been subjected to analysis by science, one after another. In the end it’s all proven wrong. For example; religion believes that the universe is one of Gods many creation. Science disagrees with this and says that particle collision and explosion is what created the universe. To date this theory of science has been proven wrong with thousand of scientist working to prove “God Wrong”.

People have lost faith in religion and to people science appears more rational and convincing, conquering their hearts with its practical values. The application of its laws provides man comfort and luxuries, religion has no such material. What religion has no one will know till u reach eternal faith and peace. Religion has one thing and one thing only power. Science has its limitations. Humans have a body as well as a spirit. Science only deals with the body; the body cannot do without the spirit. Science gives comforts, religion alone give men the courage to struggle against all odds.

We may even face death itself, with a smile and open arms. Religion brings humans their wondered spirit. In the end, it is said religion is a social phenomenon, personal and individual beliefs. Religion may have been weakened by science as it is a phenomenon. Science has not touch religion at least in its personal and individual aspects. People today still have faith in the name of religion like Pope Benedict XVI who remain unshaken and make many sacrifices in religious beliefs. Therefore it would be wrong to say science has humans irreligious or a mortal enemy.

Conflict Between Science and Religion. (2017, Jan 19). Retrieved from https://studymoose.com/conflict-between-science-and-religion-2-essay 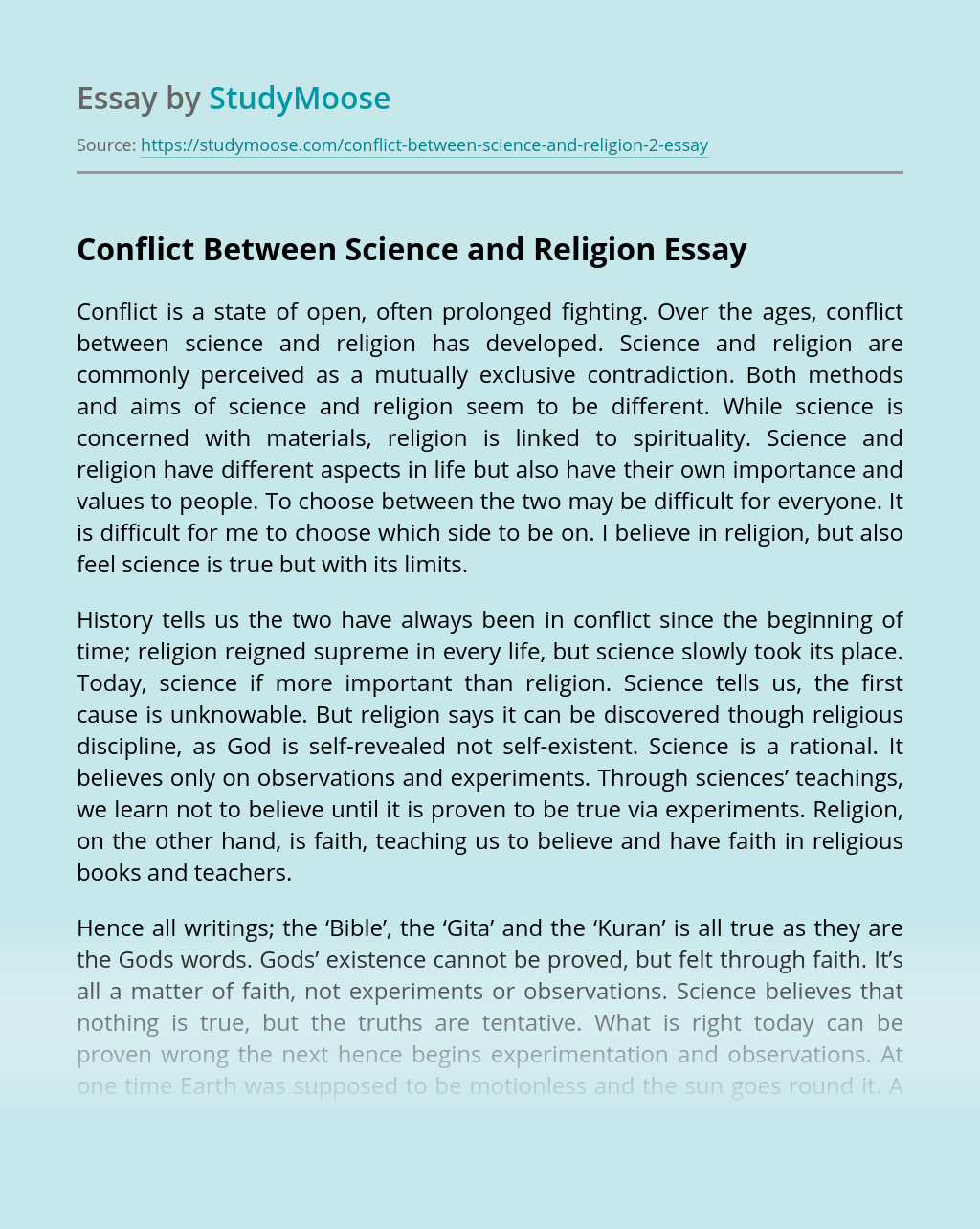