Relationship Between Art and Religion

Humans have since the very earliest time of their existence questioned various fundamental facts about their existence and the world around them. They have tried to answer the mysteries of life such as how they came into existence and what happens after their death. These questions they discovered could be only answered through religion and science. Religion went about explaining that all things were there because of some greater spiritual being which brought everything and everyone into existence.

Religion especially during ancient times put God as the master creator of all things and beings, having created men on all other creations.

Don't use plagiarized sources. Get your custom essay on
“ Relationship Between Art and Religion ”
Get custom paper
NEW! smart matching with writer

The average person doesn’t usually think of art as something that influences religion yet in true facts art helps us visualize our beliefs since as humans we at times find it easier to believe that which we see. Even in the Bible we find that humans have made sculptures, statues and paintings of their god in order for them to have something that reminds them of that greater force and act as intermediaries between them as moral beings and God as a divine spiritual being.

For example Early Christians used the fish as a symbol of God which is now replaced by the symbol of the cross; Ancient Egyptians who worshipped numerous god’s used a falcons head as a symbol of their sun god Ra, and Muslims with the symbol of a moon and star. In Ancient Greece it was customary for artists to represent the Olympian deities in perfectly-modelled men or women because they believed that the god’s were somewhat like humans but in perfect form and that they were immortal.

Art helped (and still does) people visualize all that their religion was implementing so that they could understand, believe and have faith. It was also important because many people where illiterate and so through paintings and sculpt stories painted on the walls of churches, the word of God could be delivered to them as well. Art is still visible on many religious buildings for example the paintings found on the inside and outside of walls of churches illustrates a story from, in the case of Christians, the Holy Bible.

Some examples of such would be the cathedral in Rome and that of Milan which are both of extraordinary aesthetic beauty. Art when it comes to religion is a way of spreading the word of God in a non-literal way. The beauty of art is that many people can interpret art work differently therefore a religious art piece can be inspiring and motivational to my life as well as to another in a whole different way because we would have both taken the same message but applied it to our lives in different ways.

Therefore art is a language which anyone can speak, understand and interpret personally. Some worldwide renowned artists whose art was influenced by religion are Michelangelo in The Creation of Adam and The Last Judgement, Leonardo Da Vinci in Virgin of The Rocks and Tintoretto in The Crucifixion. Apart from paintings and buildings religion also influenced music in fact nowadays we have multiple praise songs in different religions. In a nut shell whilst religion has left its mark on Art, art has been a helping hand and necessity when it comes to the delivering of the word of God.

Relationship Between Art and Religion. (2016, Sep 15). Retrieved from https://studymoose.com/relationship-between-art-and-religion-essay 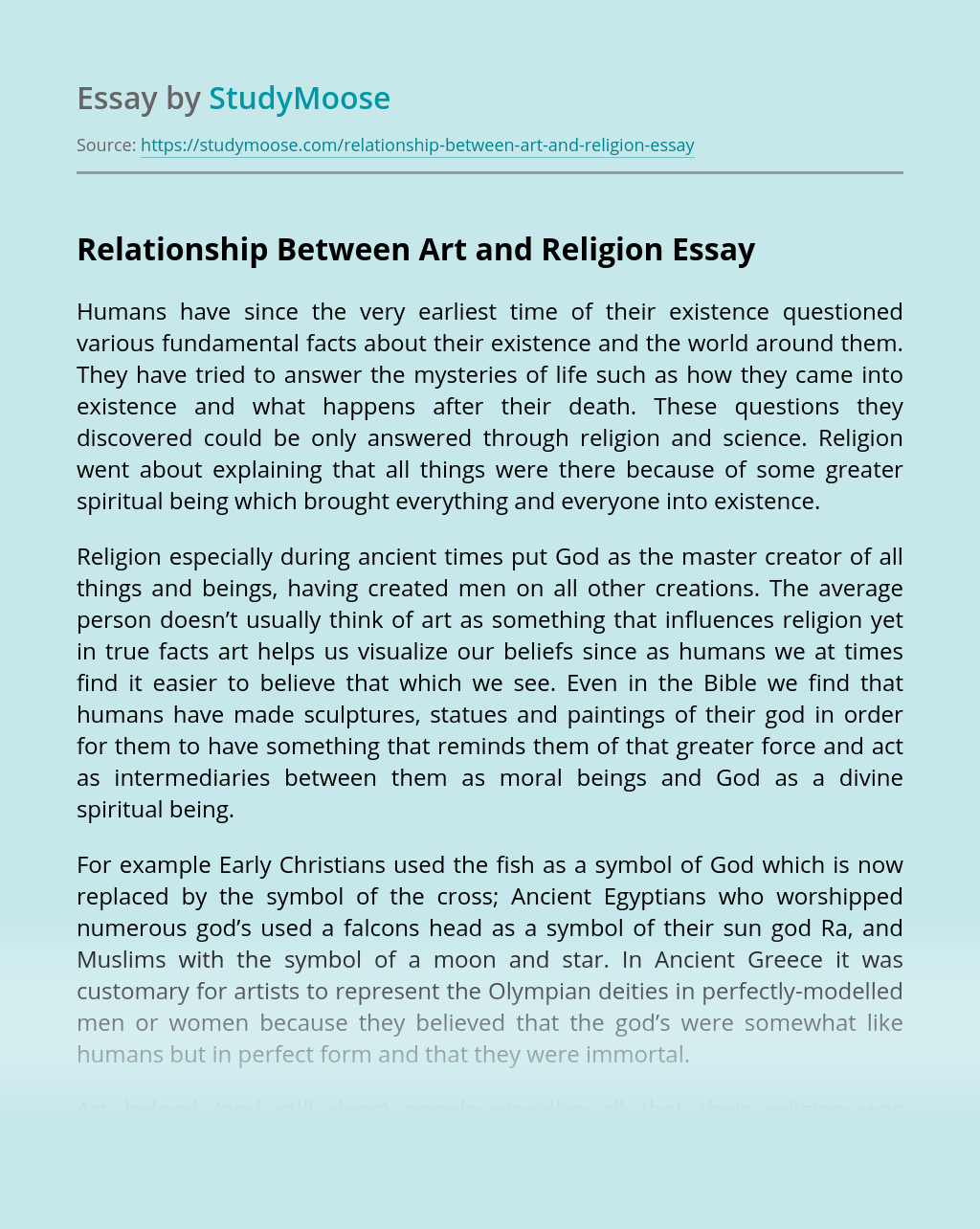