The people that make up his imaginary society have no conception of love or any other passion, and actually scorn the idea. Huxley believes that along with passion comes emotional instability. The Utopian state cannot afford any kind of instability and therefore cannot afford love. The destruction of the family is one example of the effect of Utopia’s absence of love. In a world of bottled-births, not only is there no need for a family, but the idea is actually considered obscene.

The terms “mother” and “father” are extremely offensive and are rarely used except in science. Huxley uses Mustapha Mond, the World Controller, to portray the vulgarity when he explains the obscenity of life before Utopia to a group of students: And home was as squalid psychically as physically. Psychically, it was a rabbit hole, a midden, hot with the frictions of tightly packed life, reeking with emotion. What suffocating intimacies, what dangerous, insane, obscene relationships between the members of the family group! (37) In an earlier passage, Huxley shows the effects of Mond’s explanation on one boy, “The Controller’s evocation was so vivid that one of the boys .

. . turned pale at the mere description and was on the point of being sick” (36). In reality, the family unit is the core of society. Huxley realizes the importance of the home and family. A home is where people learn to establish communication and relationships. Without a family, a person cannot learn these relationships which are invaluable in dealing with everyday life in society. In Utopia, any approach toward monogamy is forbidden and long term sexual relationships are discouraged. In the brave new world, it is taught that “everyone belongs to everyone else.” Excessive sex with many partners is considered normal and even expected. In a conversation between two of the female characters, Huxley illustrates Utopia’s views on monogamy through Fanny Crowne, “I really do think you ought to be careful. It’s such horribly bad form to go on and on like this with one man” (40). In Huxley’s Utopia, having sex with only one partner is not acceptable. Sexual pleasure in this world is greatly degraded. Promiscuity is considered a virtue, unlike actual society where promiscuous women are thought to be trashy and cheap. Children are taught at a young age to be exploratory in their sexual behavior. Children who seem timid and embarrassed about their bodies are taken for psychological testing. Huxley criticizes the idea of the absence of love in Utopia. In actual society, love is a revered emotion. Our society cannot exist without passion because it is the foundation of all relationships. Unlike Utopia, sexual relationships cannot be degraded because they are the manifestation of love. Huxley’s representation of Utopia in terms of technological evolution is a world that is enslaved by science. Everything in this world is owed to science. Huxley refers to scientific manipulation stating, “out of the realm of mere slavish imitation of nature into the much more interesting world of human invention” (12). Not only are people born, or in this sense created, by scientific means, but they are also conditioned to think and live a certain way through science. Even before babies are born, they are treated to a specific amount of oxygen, or a specific temperature in order for them to be conditioned to fit into a certain caste. In the novel, Henry Foster explains this process to the students saying: We also predestine and condition. We decant our babies as socialized human beings, as Alphas or Epsilons, as future sewage workers, or future . . . Directors of Hatcheries. (12) In Brave New World, science and technology are used not to help society, but to control society. From the time that the embryos are in each bottle to the time of death for each person, science is acting as a controller, ruling over every individual life. Although their world is based on science and technology, the leaders of Utopia know that “science is dangerous; [they] have to keep it most carefully chained and muzzled” (231). In a world where “Community, Identity, and Stability” is the main objective, scientific advancement is unacceptable. As the World Controller explains, science is “. . . another item in the cost of stability . . . incompatible with happiness” (231). Huxley knows that along with science comes change and in his Utopia, no one can afford change. By sacrificing change, the controllers of the brave new world are maintaining stability. In our society, man controls science to benefit and improve the quality of life. Conversely, in Utopia science controls mankind. In a world where so much emphasis is placed on individualism and human initiative, the applications of this policy are unrealistic. Huxley is aware of this absurdity and criticizes its practicality in everyday life. In Brave New World, Huxley shows how the sacrifice of a god must be made in order for the stability of Utopia to be maintained. Any religious book is considered to be pornographic. All old bibles are locked away and forbidden to be read. As Mustapha Mond states, “God in the safe . . . ” (237). The people who occupy Utopia cannot be exposed to the bibles because “. . . they’re old; they’re about god hundreds of years ago. Not about god now” (237). In Brave New World, god is described as necessary when “youthful desires fail” (240). Mond explains that these youthful desires never fail, and therefore there is no need for a “substitute for distraction” (240). Huxley illustrates the reason for the absence of a god through Mond’s explanation to the savage: Call it the fault of civilization. God isn’t compatible with machinery and scientific medicine and universal happiness. You must make your choice. Our civilization has chosen machinery and medicine and happiness. That’s why I have to keep these books locked up in the safe. They’re smut. (240) People in actual society place a tremendous importance on religion and god. Not only are beliefs formed and based upon religious teachings, but religion is also the moral fiber of a community. Huxley is aware that society cannot function without religion or a god. This belief is portrayed throughout the novel. Brave New World presents a frightening view of a future civilization which has forgotten current morals and standards. Instead of humans controlling science and their lives, science controls humans, and World Controllers decide all rules which are intended to mold society into a stable community. Huxley’s criticism of this community portrays the impractical application of Utopia in actual society. Works Cited Huxley, Aldous. Brave New World. New York: Harper Collins, 1989. 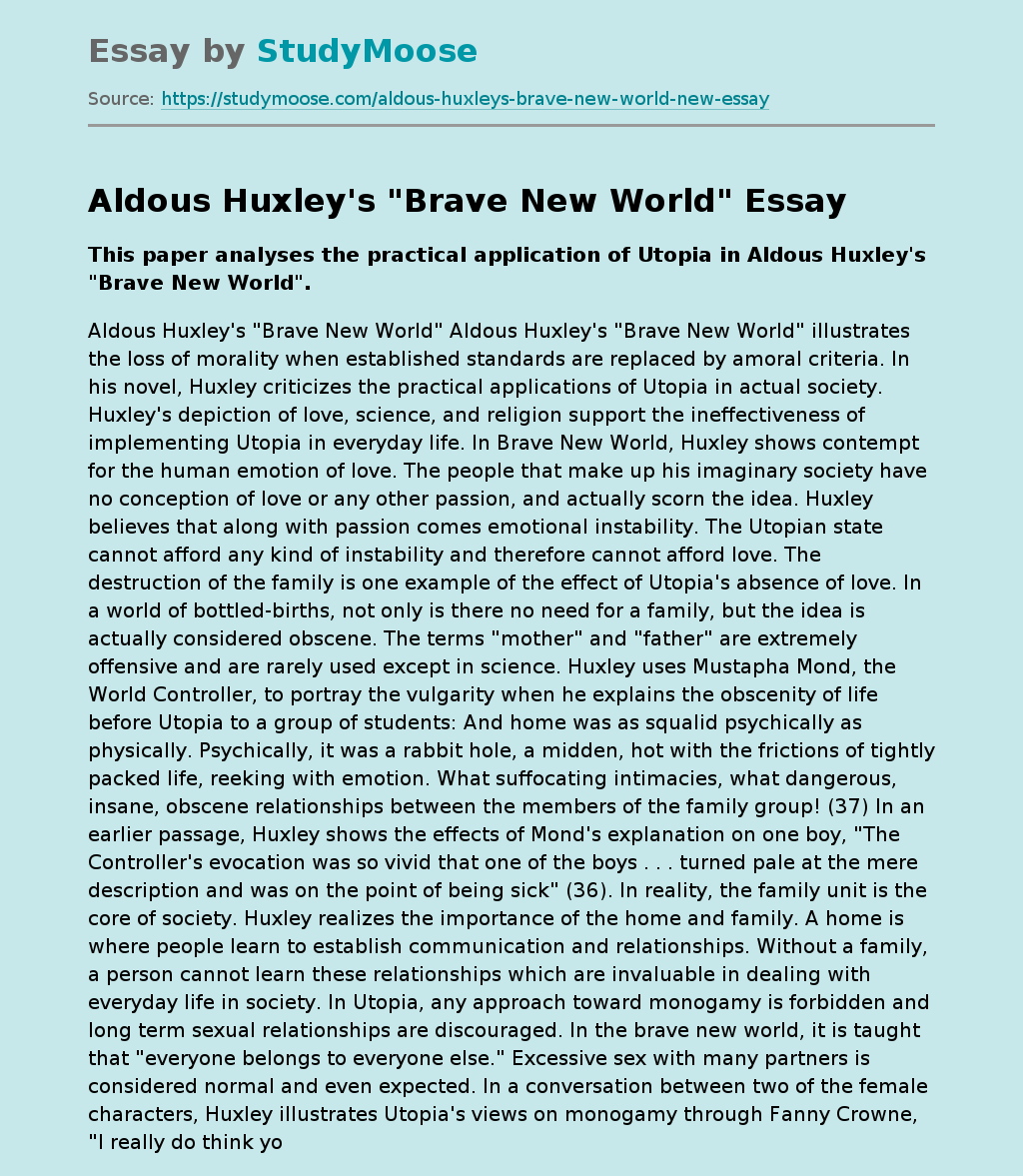