Outsiders are a very common theme in the novel Brave New World by Aldous Huxley. Many characters show traits of an outsider. John is one character who fits the bill. He is the ultimate outsider. Other outsiders in the book are Bernard and Linda. All of these characters have traits that make it difficult for them to “fit in” to the society of the New World. They don’t fit in a conforming society. These three characters are perfect examples of outsiders in Brave New World.

Don't use plagiarized sources. Get your custom essay on
“ Outsiders in Brave New World ”
Get custom paper
NEW! smart matching with writer

He wants more than anything to fit in, and when he does, he takes advantage of it. He is physically smaller than the other Alphas. Other Alphas think that a “gamma put alcohol in his blood surrogate” when he was a baby, which is why Bernard never fully developed physically (Huxley, 46). He also “spends most of his time by himself – alone” (Huxley, 45). The other Alphas don’t really want to be around him.

Bernard has one friend, Helmholtz Watson, who is also an outsider. Everyone in the beginning of the book views Bernard as an outsider.

When Lenina tells her friend Fanny about being interested in Bernard, she “look[s] startled” and strongly disapproves of the idea because of Bernard’s “reputation” (Huxley, 44). People don’t accept his differences because they are brainwashed to think that everyone who is different doesn’t belong in their “perfect” society. Bernard later starts to fit in to society because of his newfound popularity after bringing John back from the Reservation.

He begins to conform because deep down all he wants to do is fit in. He throws a party and is all of the sudden the most popular kid around.

He really enjoys his newfound popularity. His sudden change in attitude shows how shallow he is. He disapproves of the society in the New World because they didn’t accept him in the beginning. When they accept him, he likes the society which shows how hypocritical he is. John’s mother, Linda, is another classic example of an outcast in Brave New World. First of all, she had a child, which is unheard of in their society. People in the New World are shocked when they learn of the child. The word “mother” alone “made Lenina look uncomfortable” (Huxley, 118).

The idea of a family disgusts the citizens of the New World and she is definitely viewed as an outsider for having one. Another reason Linda isn’t accepted is the fact that she aged. When Lenina first sees Linda, she is disgusted at “all the lines on her face” and she cringes at the sight of “the wrinkles” and her “sagging cheeks, with those purple blotches” (Huxley, 119). The citizens are not used to old people. Lenina does not know that this was the natural aging process. Linda is also viewed as an outsider on the Indian Reservation.

She is used to the New World, and when she first arrives in the Indian Reservation, she is viewed as different. She is used to sleeping with many men, so when she “had people in the ordinary way, the others [thought she was] wicked” (Huxley, 121). The women who lived on the reservation hate her deeply. She becomes an outsider on the Reservation. Linda is a fitting example of an outsider in the book because she aged, she has a kid, and she lived on the Indian Reservation with the same morals as the people from the New World. Lastly, the ultimate example of an outsider is John.

He does not fit into the New World and he does not agree with the morals they lived by. He is searching for truth, which is a foreign idea to the citizens of the New World. He ends up spending his time alone, because he does not like the people of the New World. His wish to be alone is the reason why he wants to go to the islands. He wants to be anywhere else, “So long as [he] can be alone” (Huxley, 243). He does not conform to the society because he had grown up naturally, without being brainwashed by the government.

In conclusion, John is the textbook example of an outsider in the book because no matter where he is, he never fits in. These three characters are great examples of outsiders in Brave New World. Outsiders are a very common theme in the book, and John, Linda, and Bernard are all characters who display traits of people who are different. Because they do not conform to the societies they live in, they become outcasts. Without these traits, this novel would not have much of a story. 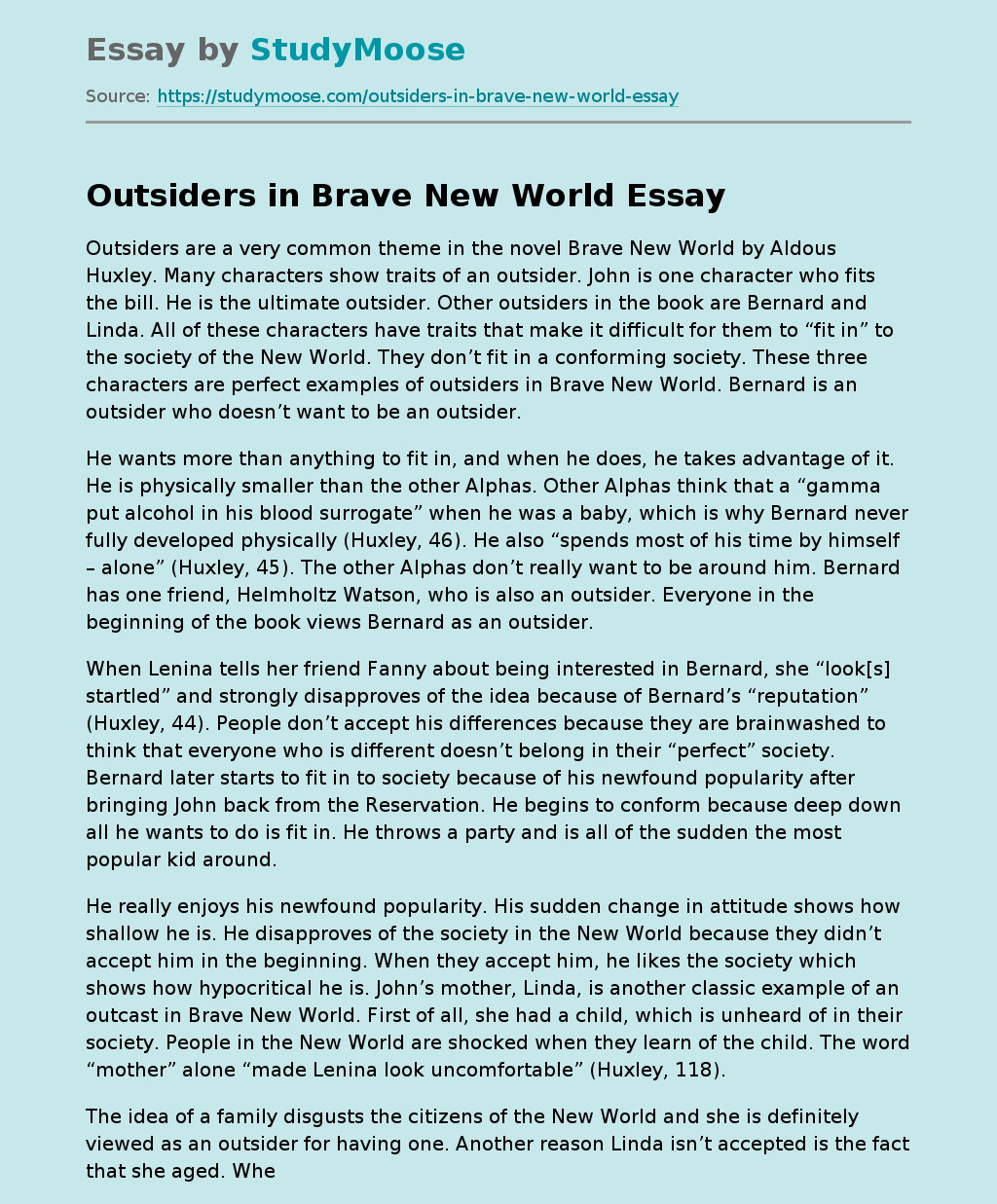