This paper reviews the life of “Buffalo Bill Cody”, the Wild West showman

“Buffalo Bill” William Frederick Cody, also known as Buffalo Bill, was born into an anti-slavery family. He had a rough childhood, but despite this hardship he grew up to be an adventurous wild west showman, and achieve many historical goals. On February 26, 1846, near the small town of LeClair, Iowa, William F. Cody was born to Isacc and Marry Ann Cody. At the time William had two sisters, Martha and Julia, and a brother, Samuel.

Don't use plagiarized sources. Get your custom essay on
“ Buffalo Bill Cody, a Famous Person and Showman ”
Get custom paper
NEW! smart matching with writer

But he ended up with three more sisters, Eliza, Helen, and May, and another brother, Charlie. In the first eight years of his childhood, William grew up on a farm his father owned and worked. During this time, William had plenty of space on the Plains to play with his brother Sam and his black dog, Turk. William also had some young Indian friends he met while on a picnic with his sisters.

The Indians were trying to steal the Cody’s lunch, but Bill stopped them and became friends with them.

Besides picnics, young Will also enjoyed riding horses, having pretend Indian fights with Sam, and hunting in the woods. Sadly, Samuel died when he was thrown from his horse. Because of this, William not only lost a brother but he lost a very good friend. In 1854 William, along with his anti-slavery family, moved near the city of Leavenworth, Kansas. This was not an easy move for the Cody family seeing how most of that part of Kansas was pro slavery.

They were worried about this because earlier in Iowa a dispute about slavery between Isacc and his brother Elijah, led to Elijah stabbing Isacc. Luckily, he survived and nothing like this happened in Kansas.

While in Iowa, Bill had received no education. After moving to Kansas he attended several sessions of country school organized by his father. In the two and a half months he attended, Bill learned to read and write which would help him in his future careers. In order to help his family after his father’s death in 1857, William took his first job working for the firm, Russel Majors & Waddel, making wagon-train trips across the Plains. It was rough, but William enjoyed these frequent trips. Later, Will road for the Pony Express when it was established in 1860, and was a scout and guide for the Union Army. When the Civil War started in 1863, Bill Cody enlisted in the 7th Kansas Cavalry as an army scout in Indian campaigns. In 1866, after the war was over, Bill bought and ran a hotel in Kansas called the “Golden Rule House Hotel”. After this failed, Bill contracted with the Kansas Pacific Railroad, in 1867-1868, to furnish buffalo meat to the workers on the line. This earned him his nickname, Buffalo Bill. In 1868-1872, Buffalo Bill served again as an army scout when he was elected to the Nebraska legislature. In 1872, after carrying dispatches through hostile Indian country for Gen. Philip H. Sheridan, he became chief of scouts for the 5th U.S. Cavalry for four years until 1876. During this eight year period, Buffalo Bill took place in sixteen Indian fights, including the defeat of the Cheyenne at Summit Springs, Colorado (1869), and at Hat Creek, Wyoming in 1876, he was famed for his “Killing of Yellow Hand”.

Also during this time, in 1869, Ned Buntline (E. Z. C. Judson) made Buffalo Bill the hero of a dime novel that was later dramatized, and in 1872 he persuaded Cody to appear on stage. Cody broke with Buntline after a year, but remained an actor for eleven seasons. Cody made his first and most authentic autobiography in 1879. He was also the author of dime novels, as well as the hero of some 1,700 of these publications, most of them written by Prentiss Ingraham. In 1883, Buffalo Bill was so inspired by the success at a July 4th celebration at North Platte, Nebraska, that he organized Buffalo Bill’s Wild West Show. This was an outdoor wild west show that dramatized the contemporary western scene with staged Indian fights, round-ups, stage robberies and buffalo hunts. Buffalo Bill also introduced such stars as Buck Talor, “King of the Cowboys”, the first cowboy hero; Annie Oakley, “Little Sure Shot”; Johnny Baker, “The Cowboy Kid”; and for one season Sitting Bull. The shows acts included the Pony Express, the attack on the Deadwood Stagecoach, the “Rough Riders of the World”, the roping, the bucking broncos, and the “Cowboy Fun”, that developed into the rodeo. Cody remained with the show for almost twenty years. Showing in 1887 for Queen Victoria’s Jubilee made it an International success and many other European tours followed. Buffalo Bill’s show also toured the U.S. scoring its greatest success at the Chicago World’s Fair of 1893.

Buffalo Bill Cody was awarded the Congressional Medal of Honor in 1872 for his bravery in a fight with Indians on the Platte River, but in 1917 Congress revoked the award because he was not a member of the military at the time. In 1901 Buffalo Bill became president of the Cody Military College and the International Academy of Rough Riders, a riding school he established on his property in Wyoming Buffalo Bill was about six feet tall. He had a medium build, was strong, tough, and had long hair and a beard. He married Louisa Frederici on March 6, 1866 and had three daughters named Arta (Dec. 16, 1866), Orra (Aug. 1872), and Irma (Feb. 9, 1883).

Buffalo Bill had many friends, such as Annie Oakley, Wild Bill Hickock, and others in his wild west show. He also considered his buffalo gun, Lucretia, and his horse, Brigham, his close friends. There are several causes Buffalo Bill was interested in. One was preserving buffalo. He did this because he felt guilty for killing thousands of them. By using buffalo in his show and raising them on his ranch, Bill helped save them from possible extinction. Buffalo Bill’s Wild West Show also offered Indians employment at a time when their opportunities were few, and many of them, for the first time thus learned of a world beyond the limits of their villages. After 1894 Cody lived on a ranch in the Bighorn Basin in northwestern Wyoming where he raised buffalo. He also founded the town of Cody where he built the Irma Hotel, named after his daughter, which still stands today.

On January 10, 1917, near Denver, Colorado, the wild west legend, Buffalo Bill Cody, died. His grave is located on Lookout Mountain, near the town of Golden, Colorado, and can be seen by tourists. Buffalo Bill Cody was very important to the west. Even though he made the mistake of killing thousands of buffalo, he realized this and made up for it by repopulating and raising buffalo. Cody was lucky in some aspects; one was living in the wide open Plains. William Frederick Cody should be remembered as a wild west legend who showed what life was like in The Great Plains of America. 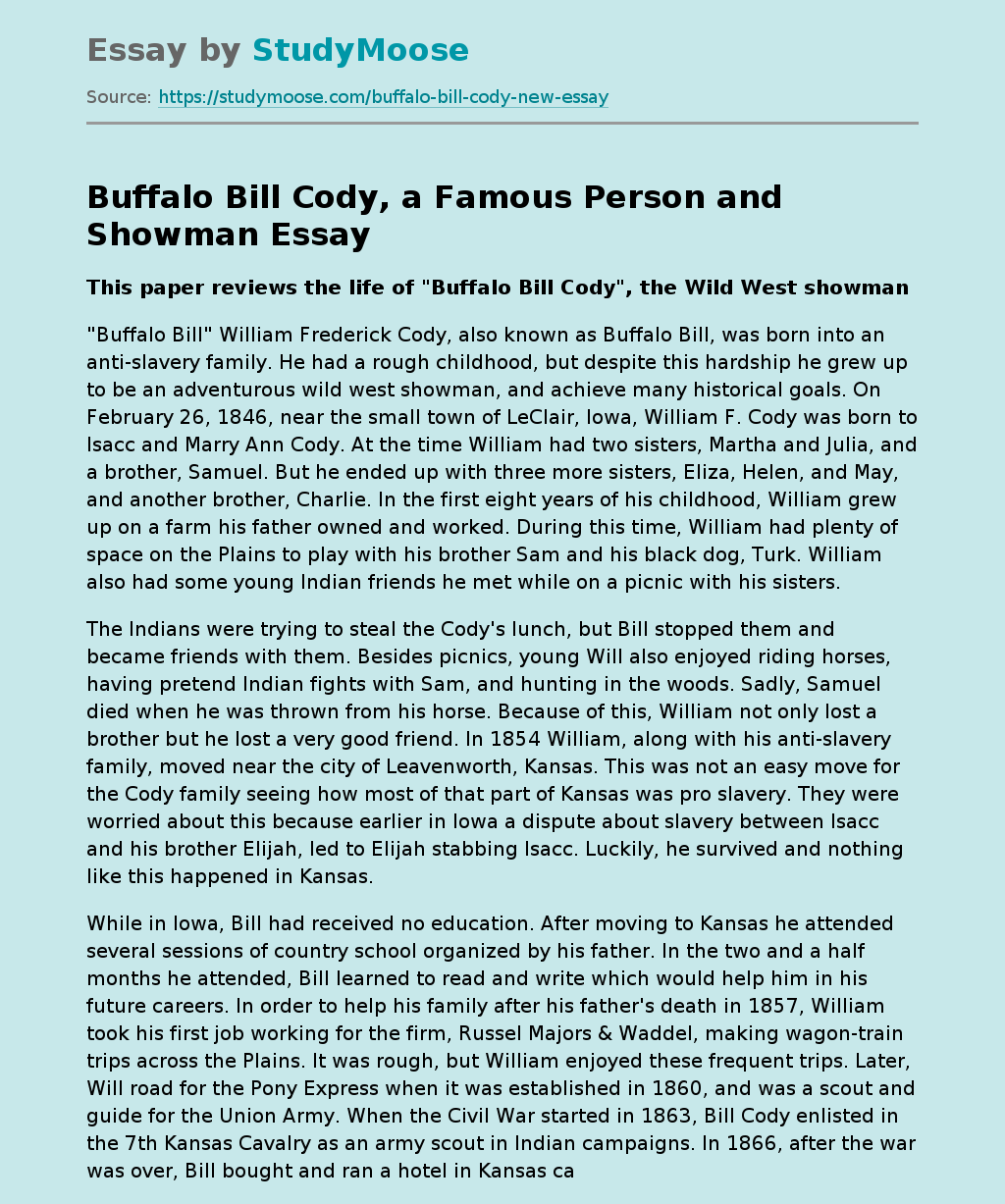