Phineas Taylor Barnum, born on the fifth of July 1810, detailed by himself in his autobiography, and the P.T. Barnum in the 2017 movie The Greatest Showman directed by Michael Gracey differ greatly although they represent the same man and his magnificent story of wonder. The matter of creating a two hour long, PG rated, musical film out of the hard work of a man with a vision is expected to have some differences from the truth. Major differences like Barnum’s early life and careers before starting down the showman route, although not a crucial part of the upbringing of the Barnum & Bailey Circus, were shown with drastic differences to reality in the film, as well as the array of oddities that accompanied him throughout his journey.

Don't use plagiarized sources. Get your custom essay on
“ The Greatest Showman ”
Get custom paper
NEW! smart matching with writer

Also, the time line of his life was slightly altered in the making of the film. Therefore, qi my opinion, the story of Phineas Taylor Barnum and his famous circus could have been expressed in further detail in the film to increase the realism of the tale without taking,too much from the film’s tone itself.

Barnum was born to Phino Barnum and Irena Taylor, and throughout the first thirteen years of his life gained five younger siblings. At fifteen, Barnum’s father died, leaving him to help his mother raise and provide for the family. However, in the film, Barnum is shown as an only child of a tailor, who then dies of an unknown illness shortly thereafter. Barnum is then shown begging on the streets, not providing for anyone other than himself.

I believe th J the matter of him providing for his family could have been a beneficial detail to add into the film to show his work ethic and how hard he truly worked to fulfill his dreams. Later in life, Barnum was a publisher for the paper Harald of Freedom in Danbury,

Connecticut, while in the film he worked in an unnamed shipping company and was dismissed indefinitely, leaving him without work. I expect that this was done for dramatic effect and to quickly advance the story, which is understandable since the focus of the movie was Barnum’s circus and not the career he had prior. Barnum then, a few years later, wrote his autobiography, leaving it to public domain for more fame rather than money.

Also, while in the film Barnum started the circus act after he was without a job, he didn’t start his showman career until he was well into his sixties. He partnered with James A. Bailey, hence the famous “Barnum & Bailey Circus”, and Bailey wasn’t even mentioned in the movie. Instead, Barnum partnered with high­ class play wright Phillip Carlyle. While partnered with Carlyle, Barnum hosted the show within Barnum’s American Museum when the museum was burned twice before the show was even dreamed of. The matter of removing Bailey from the narrative was completely unnecessary in my opinion. Therefore, although it is expected to have some differences from the truth, the film strays from reality on several occasions.

In addition to timeline discrepancies, the exotic people, or “oddities”, that accompanied Burnum on his journey were vastly different between movie and real life. Burnum’s first few “exhibits” weren’t mentioned or shown and the first few people he was introduced to that started

his circus where warped or renamed for no reason at all. For example, Charles Stratton, also known as General Tom Thumb, was presented as the shortest man alive, standing at merely 25 inches tall. Stratton was a four-year-old boy with a growth defect, while in the film, he was an adult. Myrtle “The Four-Legged Woman” Corbin, William “Zip the Pinhead” Johnson, Prince

“The Living Torso” Randian, Isaac “The Human Skeleton” Sprague, and several others were unstated while being some of Barnum’s most famous oddities. Those like Josephine “The Bearded Lady” Clofullia and Chang “The Chinese Giant” Yu Sing had aspects of their identities warped for the film. Clofullia was renamed as “Lettie Lutz” and Yu Sing was completely replaced by an unnamed Irishman. These instances are irrelevant to the plot and have no reason to be had. The film is to tell the story of Phineas Taylor Barnum and his journey of following his dream of being “The Greatest Showman” with fun, catchy musical numbers for all ages. The erasure of key points in Barnum’s life holds no purpose.

In all, the differences between the movie The Greatest Showman and the reality told by Barnum in his autobiography pertaining to his journey to becoming a showman contrast tremendously. With matters like timeline discrepancies, name changes and character erasure, the acts of changing such detrimental facts about Barnum’s story hold no relevance, and if told correctly, would not have negatively affected the film’s tone or success. 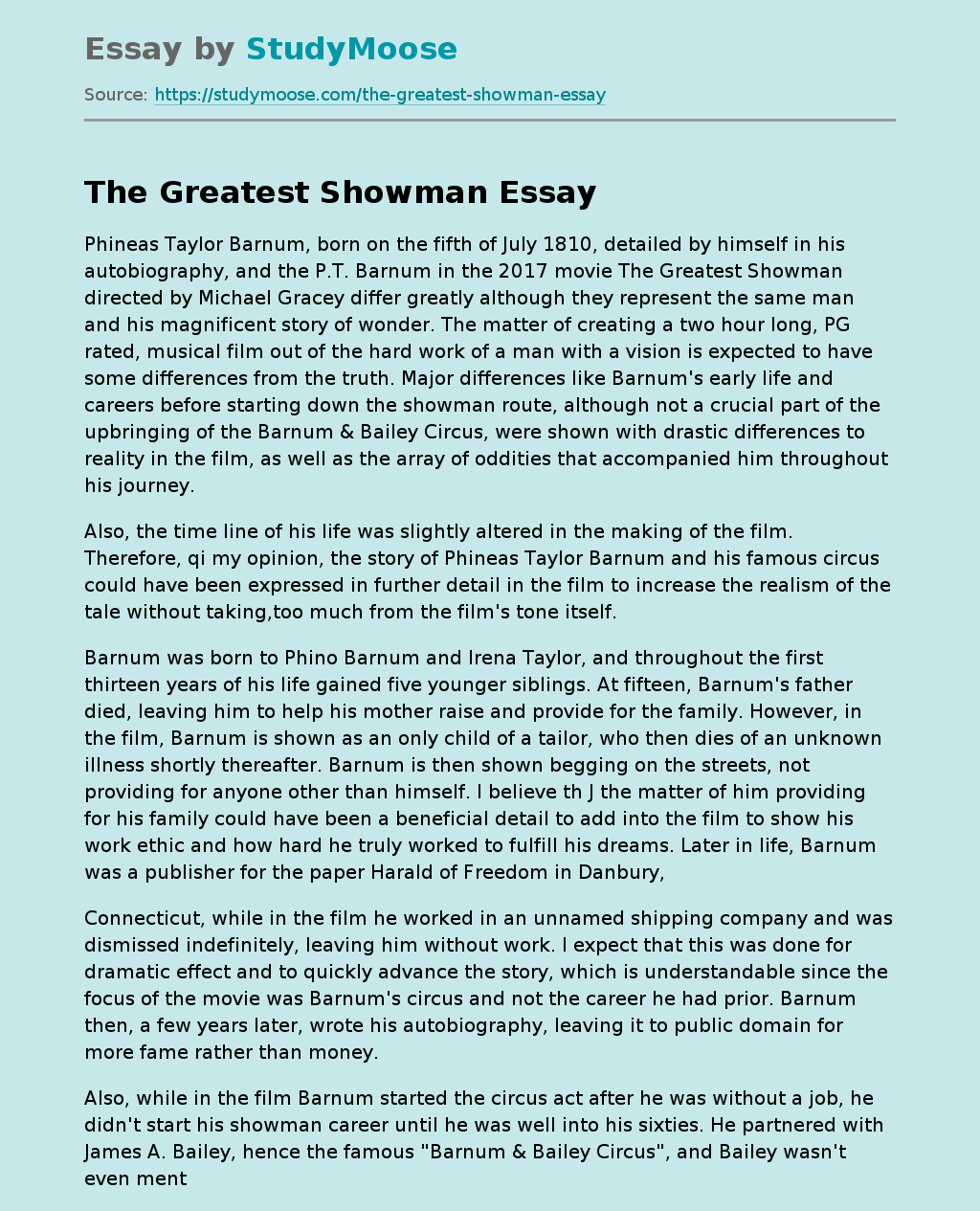