Elon Musk is a South African American who has created many great things. He started by co-founding PayPal the leading global payment transfer provider. The company came to be with the help of two companies, X.com created by Elon Musk and Confinity created by Peter Theil and Max Levichin. Elon was the chairman of PayPal until he sold it to eBay in 2002 for 1.5 billion.

After selling PayPal in 2002 he founded spaceX a space technology company. He has invested 100 million dollars into SpaceX.

Don't use plagiarized sources. Get your custom essay on
“ A Famous Person Elon Musk ”
Get custom paper
NEW! smart matching with writer

This company works on creating new technology for space. They have created several rockets and spacecrafts. In 2008 SpaceX received a 1.6 billion Dollar contract from NASA to build 12 cargo flights replacing the space shuttle. The Falcon1 is the first liquid fueled rocket to reach Earth’s orbit successfully. It is also the only rocket developed by a private company, as well as the Falcon 9 and the Dragon Spacecraft. The dragon is the first commercial spacecraft to attach to the international space station successfully on May 25th, 2012.

SpaceX stands as the only commercial company to recover a spacecraft from earth’s orbit successfully. They plan their first manned flight in 2015.

In 2003 Elon founded Tesla Motors an electric car company. He went into this company with several different investors Martin Eberhard, Marc Tarpenning, Ian Wright, and JB Straubel. He personally invested 70 million dollars into Tesla Motors. With the other investors the combined investment is more than 180 million dollars. Elon became CEO of the company after a performance review replacing Ze’ev Drori.

After that they introduced the Model X an electric suv on February 29, 2012 and will start production in 2013. Elon has been very involved in the creation and design of these electric cars. Tesla started to build a structure for electric cars. The biggest problem with electric cars is range. In solving this problem Tesla has started to build charging stations called superchargers. They are places on widely traveled routes. Places like Los Angeles to Los Vegas, Las Angeles to Lake Tahoe, and many more. The stations are free and placed next to malls and restaurants. Tesla provides this service for free thanks to the collaboration with SolarCity. Tesla is now delivering both the roadster and model S to thousands of happy customers.

Elon is also an investor in SolarCity a renewable energy company. He has invested about 10 million dollars. SolarCity was the number one residential installer in 2011. The company was started by two brothers Peter and Lyndon Rive. They have worked with Tesla motors on installing superchargers around Los Angeles and other locations. SolarCity is a very respectable company that Elon is becoming more involved with. 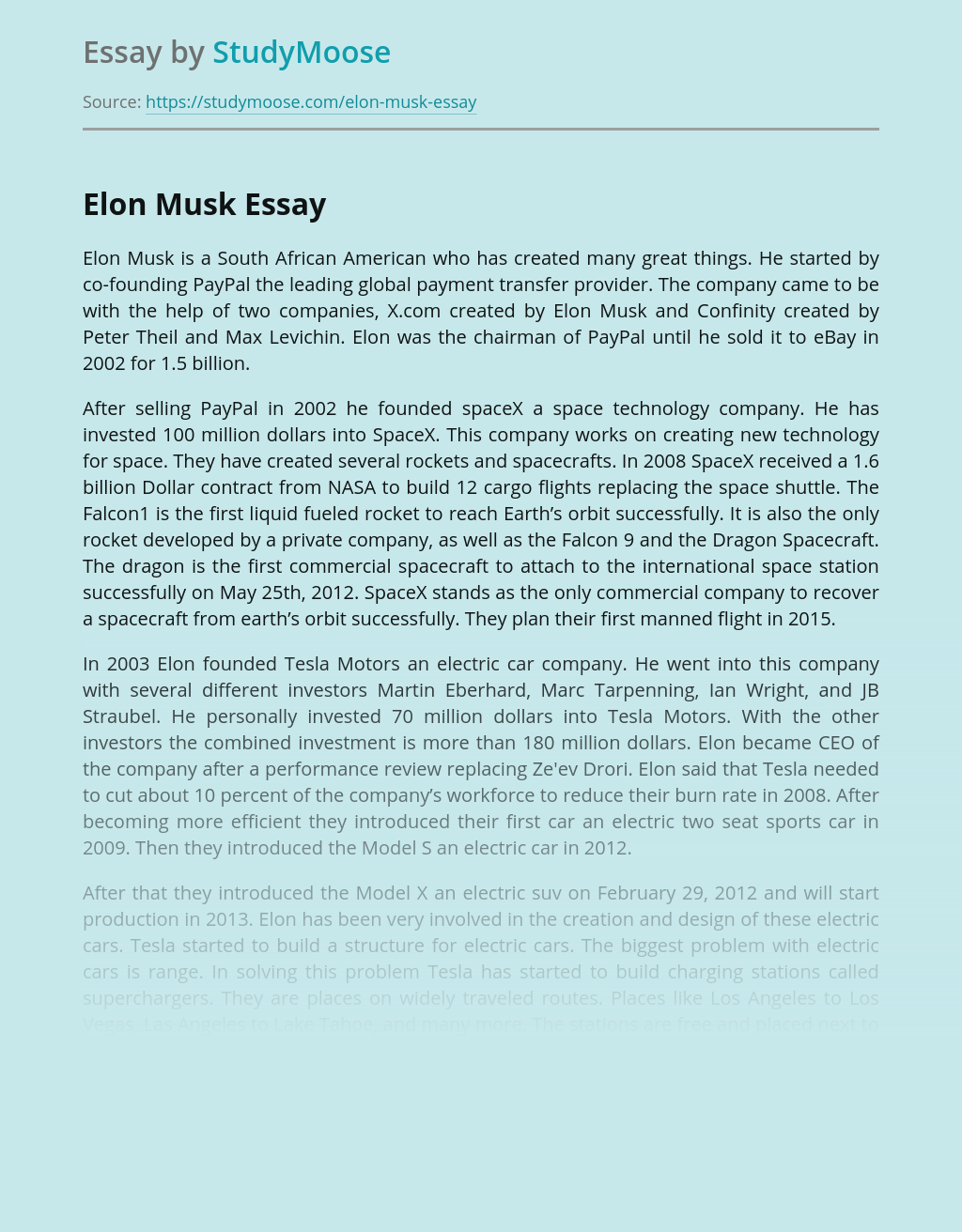