When one is studying chemicals, there are many important factors of significance. The color of a chemical is a useful tool in its study.

Don't use plagiarized sources.
Get Your Custom Essay on ﻿Beer’s Law Lab Report Just from $13,9/Page

Beer’s Law is used to relate and compares the amount of light that has passed through something to the substances it has passed through. The Law is represented by A=abc. “A” is the absorbance of a solution. The “a” represents the absorption constant of the solution being tested. The “b” represents the thickness of the solution in centimeters, and “c” represents the solution’s molarity or concentration. The “A” can be calculated by using the negative log of the transmittance (T).  The lab experiment conducted used the salt Co(NO3)2·6H2O. The Co(NO3)2·6H2O was diluted in distilled water to four different molarities. The most concentrated solution was used to determine the optimal wavelength to study the salt by measuring the transmittance of the Co(NO3)2·6H2O with twenty different wavelengths of light. Once the optimal wavelength was concluded, the transmittance of the less concentrated Co(NO3)2·6H2O solutions was also measured. The measurements of the less concentrated solutions was to determine the absorbance constant, “a”. Finally, the transmittance of an unknown concentration of Co(NO3)2·6H2O solution was measured and molarity was determined based on the absorbance constant determined earlier in the experiment.

The deionized water was replaced with 0.1 M solution and the transmittance was recorded. This process was repeated twenty times with the wavelength increasing by 10nm consecutively until the last wavelength, 600nm, was measured. It was necessary to calibrate the spectrometer between each change in wavelength. Every change in nanometers had to be measured and calibrated at 100 percent with the control of deionized water. This maintained accuracy when the transmittance of Co(NO3)2·6H2O solutions measured.

Finally, a Co(NO3)2·6H2O solution with an unknown molarity was provided (unknown “B”). The wavelength of the spectrometer was not changed. The deionized water was placed in the chamber and calibrated to 100 percent transmittance. The deionized water was removed and replaced with a test tube containing unknown “B”. The transmittance was recorded to determine what the molarity was. Data:

Discussion:
Beer’s Law is a law that demonstrates that the absorbance of light at a certain wavelength is directly proportional to the concentration or molarity of a solution. This was apparent with the naked eye. When making the solutions, 0.291 moles of was added to a test tube with 10mL of deionized water to make a 0.1 M solution. By taking 5mL out of the solution and mixing it with 5mL of deionized water, the number of moles was halved which made the second solution a 0.05 M solution. When the process had been repeated, it was apparent that the solutions had been diluted based on the color of the solutions in the test tubes. The 0.1 M solution was absorbing more light and was a deep rose color. As the solutions became more dilute, the concentration of the visible color diminished as less light was absorbed to a very pale translucent pink in the 0.0125 M solution.

The spectrometer than calculated the percent transmittance (%T) and displayed the data in a percent. As was shown above in table 1 and graph 1, the %T started high and ended high with percentages over 90. The higher %T demonstrate less light was absorbed by the solution and therefore not the wavelength of light that is absorbed by Co(NO3)2·6H2O. Toward the middle of the data, 500nm and 510nm, the %T became substantially lower. This demonstrates that Co(NO3)2·6H2O absorbs wavelengths about 500nm.

In the second part of the lab, the different molarity, or concentrations, of solution were measured for %T with a 500nm wavelength. The absorbance was calculated by using the negative log of T. This was done because T and A are inversely proportional. This was demonstrated in table 2 and table 3. These tables confirmed that as T decreases, A increases.

The third part of the experiment used the point slope formula to determine a molarity based on an absorbance.

The absorbance of light was dependent on the concentration of solute. The variables “A” and “y” are both dependent variables and were comparable to one another. The variable “x” and “c” were the independent variables. The variable “a” was the absorption constant and “b” was the thickness of the solution. In this case, “b” was equal to 1 cm. Graphs 2 and 3 demonstrated the plotted points and from that, excel calculated a trend line based on the point-slope formula. Graph 3 demonstrated how the estimated molarity of unknown “B”, based on the point-slope formula, fits the trend line. Conclusion:

Beer’s Law was studied in this lab. The goals of this were to determine optimal wavelength absorption by Co(NO3)2·6H2O and determine transmittance and absorption from the data collected. The optimal wavelength absorption for Co(NO3)2·6H2O occurred at 500nm. The data also showed that while the transmittance and absorbance were indirectly proportional from one another, both variables were dependent on the concentration of the solution. Once the data had been collected and understood, an unknown concentration of solution was tested for transmittance. Based on the trend line formed from other concentrations of Co(NO3)2·6H2O solutions, the molarity was easily calculated to be 0.048. 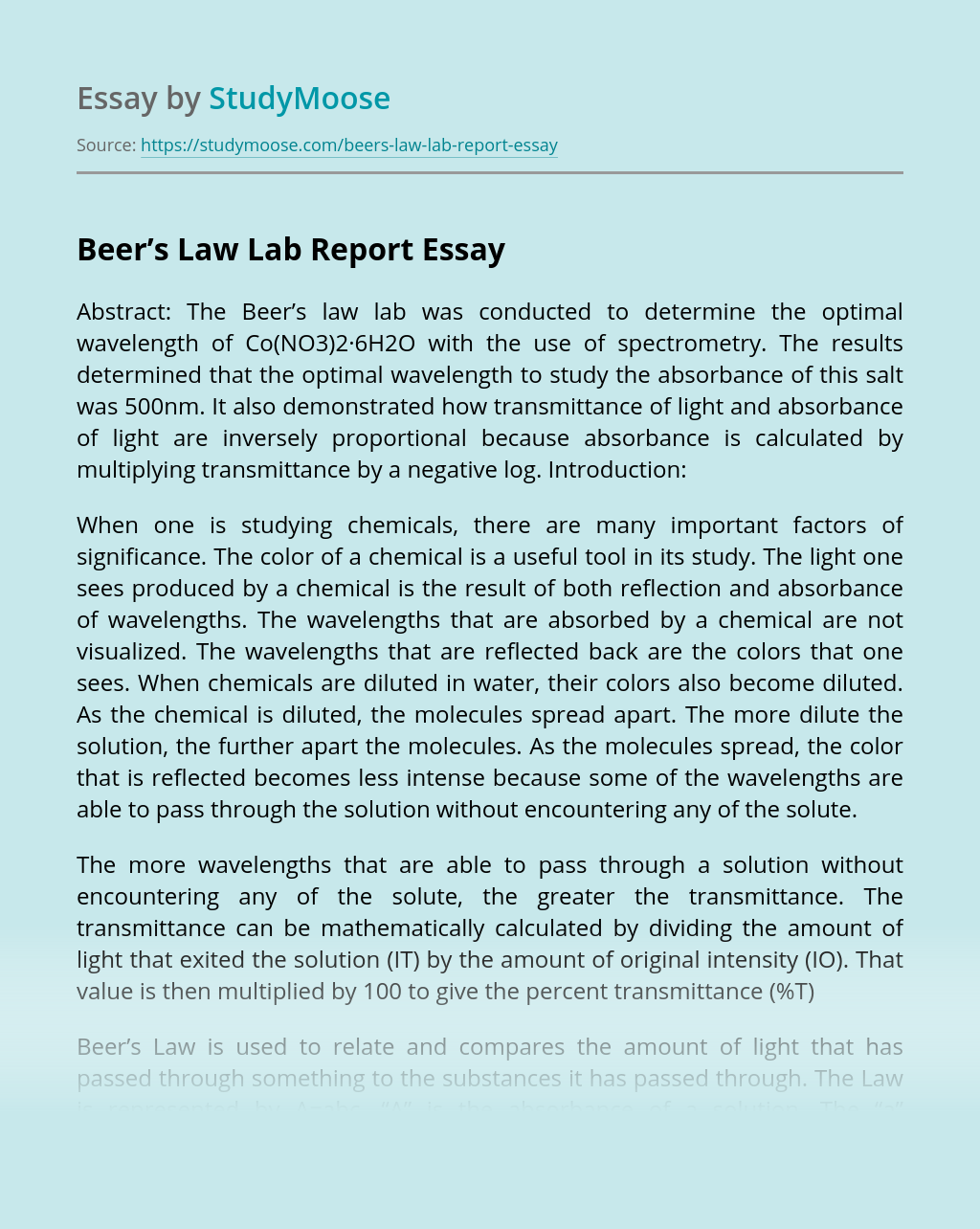 In “Discourse on Colonialism” mentioned on page two, paragraph three, the author makes a connection with the misinterpretation of how the Europeans thought that those who did not practice Christianity were savages. “…is Christian pedantry, which laid down the dishonest equations Christianity=civilization, paganism=savagery, from which there could not but ensue abominable colonialist and racist consequences,... VIEW ESSAY

A subsidy is an assistance paid to a business or economic sector. Most subsidies are made by the government to producers or distributed as subventions in an industry to prevent the decline of that industry (‘Subsidy’, 2012). Subsidies are used to cushion the price effect of products or commodities or services to the consumer; hence... VIEW ESSAY

The Dalai Lama, also referred to as His Holiness, assumes the roles of head of state and the spiritual leader of Tibet. Don't use plagiarized sources. Get Your Custom Essay on ﻿Beer’s Law Lab Report Just from $13,9/Page Get custom paper Formally known as Tenzin Gyatso, he was born in Tibet on July 1935. At the... VIEW ESSAY

The soft chime of the solemn bell was to be heard as the man closed the door. A wave of musty, old books and frequently polished shelves freshened over. The aging existence of the room was visible by the occupation of the eight legs over the thick, worn out books- books in which wonders lie... VIEW ESSAY

Is mercy killing humane? Do we have the right to assess whether a life is worth living? Should euthanasia be practiced only in the terminally ill people or for the debilitated and mentally ill too? In this write up, we get into the heart of the matter by looking at the pros and cons of... VIEW ESSAY