Within the two texts of “Hedda Gabler” by Henrik Ibsen and “Death and the Maiden” by Ariel Dorfman, both plays possess significant conclusions to each of their storylines, therefore making them “fit” when seen in the light of previous events.

Within the two plays, both of the endings convey both of their most prominent

Don't use plagiarized sources. Get your custom essay on
“ “Justify your judgment as to whether the endings of your texts are fitting in light of what has gone before” ”
Get custom paper
NEW! smart matching with writer

The fact that Hedda cannot tolerate her marriage is really her own fault, as she acknowledges she had been the one to devise it, and apparently on false premises that Mr. Tesman would grow to be more successful:

Brack: “I thought that you, like everyone else, expected him to attain the highest distinction.”

Realizing her inescapably dreary future ahead of her, Hedda responds with anger and resentment, taking her desperation for excitement out on others, on those she envies, simply because they have found a contentment that completely escapes her.

This desire for the destruction of people’s lives ultimately leads back to Hedda, and this is clearly shown through the ending of the play, namely her suicide – her final destructive act. Through this, we can see that the ending of “Hedda Gabler” is significant, as well as fitting, because we see that it resembles the play’s entire theme of self-destruction.

As for “Death and the Maiden”, its ending is also “fitting” in light of the events that

have taken place before, because it too epitomizes the play’s major theme.

In “Death and the Maiden”, the overall theme of the play is the choice between vengeance or forgiveness as the correct path towards justice. Because the ending of “Death and the Maiden” is that of an open-ending, it therefore entitles the reader to decide the fate of Dr. Miranda and whether or not Paulina decided to take retribution against him for his actions, or whether she was satisfied with his confession; Dorfman achieves this controversy by depicting Roberto as a figure with “phantasmagoric moonlight quality” (p. 46), making the reader unsure as to whether he is alive or not. Overall, the ending of “Hedda Gabbler” is fitting, as it truly captures the central debate within the play itself: whether Paulina has killed Roberto in an act of vengeance, or whether she has simply let him repent and condemn him to be remorseful throughout the rest of his life.

There is yet another similarity between the endings of these two plays, making them

each equally fitting to the previous events. There is a relationship between the endings of these two plays, as by the end of each play, none of the characters have really developed since the beginning of the play. In “Hedda Gabler”, Tesman remains eager to please Hedda throughout the play:

Tesman: “Yes, of course – it makes it a little more expensive. But Hedda had to have this trip, Auntie! She really had to. Nothing else would have done.”

Hedda does not even have to manipulate George in order to get what she wants; he seems to act as the subordinate just on his own, and he is taken completely by surprise when she eventually kills herself; just as at the beginning of the play, he remains unable to predict Hedda’s actions or to gain control over her. While Ejlert’s suicide deeply affects Mrs. Elvsted, she immediately dedicates herself to helping Tesman make sense of his papers, thus adopting essentially the same role that she had with Ejlert in the beginning. Mrs. Elvsted essentially never gains any insight into why Ejlert had a drinking problem, and she never realizes that he was simply using her (although the audience realizes both of these things).

The character of Ejlert begins the play as a changed person, but then ultimately regresses back to his old habits. The character of Hedda complains throughout the play that she is bored by a dreary, monotonous life in which nothing new ever happens. The one moment in which she appears to take interest in the events around her is the moment in which she learns of Ejlert’s suicide. However, once she realizes that she may be implicated in his death (and therefore in a scandal, the one thing that she fears most), she once again feels hopeless and lacks the motivation to do anything but kill herself in response. Overall, Hedda has control of most of the characters in the play, but because she does not venture to open up or explore her own desires and fears, stagnation is the only outcome. Therefore, the ending to “Hedda Gabler” is very fitting, as its abrupt ending depicts how none of the characters have really developed.

Likewise, in “Death and the Maiden”, the ending is also “fitting” for the same reason,

as it brings the play back into a “loop”, and essentially leaving the play in the same situation as it started. The character of Paulina starts out as a character who we immediately notice has repressed emotions about past events. These emotions and feelings are mainly being subdued because of her husband, Gerardo, who believes that Paulina should simply forget the past events:

Gerardo: “You begin to open all the wounds…Isn’t it time we – ?”

This same theme of repressed emotions can be seen in the end of the play as well, as Gerardo is carrying out conversations both with strangers and Paulina as though none of the strange events have taken place. This is especially emphasized through the last line of the play: “Pau mixes a margarita that’ll stand your hair on end” (p. 46). The tone in which Gerardo says this line conveys to the reader that Gerardo plans on attempting to restore the now alienated relationship between Paulina and himself, but at the cost of continuing to repress and conceal Paulina’s true emotions.

In summary, the endings of both Henrik Ibsen’s “Hedda Gabler” and Ariel Dorfman’s “Death and the Maiden” are both equally “fitting” when seen in the light of what has previously transpired. While both of the endings to not serve to actually conclude the plots within the plays, they do however symbolize that the plays have ended with no real development within them.

"Justify your judgment as to whether the endings of your texts are fitting in light of what has gone before". (2020, Jun 02). Retrieved from https://studymoose.com/justify-judgment-whether-endings-texts-fitting-light-gone-new-essay 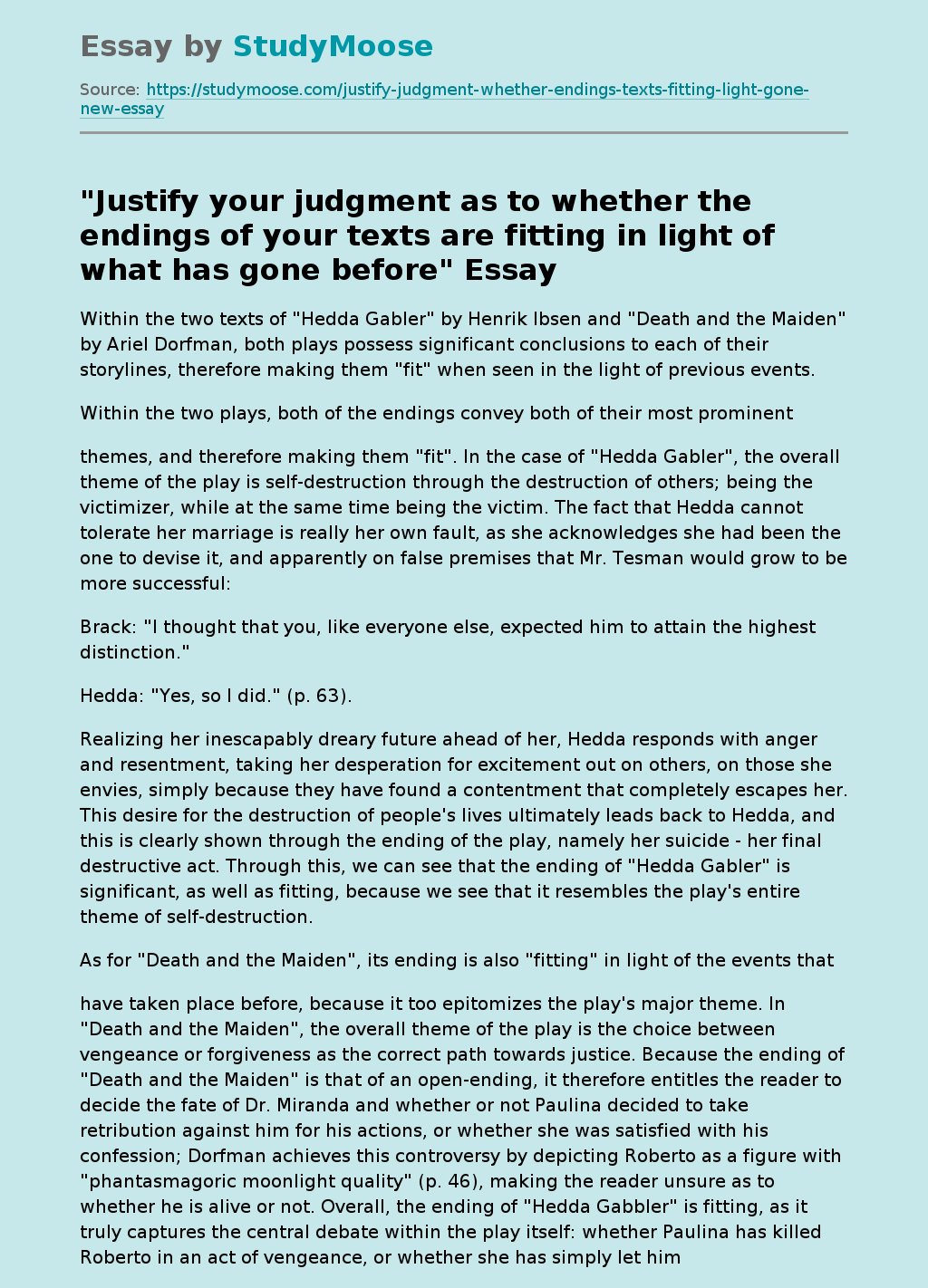