The Tennyson's message in The Charge of the Light Brigade

The poem “The Charge of the Light Brigade” by Alfred, Lord Tennyson is a patritic poem about how war was difficult and how soldiers had to fight to survive. But this poem also shows the bravery and the honor of the brigade throughout the battlefield.

The structure of the poem is very fragmented, there are six stanzas but on each stanzas de number of lines are different.

There is a lot of repetition of the same word with the rhymes:

“Cannons to the right of them,

Cannon to the left of them,

Cannon in front of them.

Don't use plagiarized sources. Get your custom essay on
“ The Tennyson’s message in The Charge of the Light Brigade ”
Get custom paper
NEW! smart matching with writer

But he also uses easy rhymes in his poem:

“Stormed at with shot and shell / Boldly they rode and well”

“Stormed at with shot and shell / Into the mouth of Hell”.

Also, the poem is like a song because there is a kind of chorus, which is repeated two times in the poem, and the rest is like the verses:

“Cannons to the right of them,

Cannon to the left of them,

Cannon in front of them

Storm’d at with shot and shell, ”

Moreover, there are many lines, which are repeated to provide emphasis on the subject.

Half a league onward”

In addition, Tennyson also uses enjambment, especially the last two lines in his stanzas, which is determined by the lines:

“Into the mouth of Hell / Rode the six hundred”

“Into the valley of Death / Rode the six hundred”

There is a lot of imagery, personification, and metaphors in this poem to describe the dangers and the difficulties that the British soldiers faced in the battle:

Moreover, the words, “valley of death, is a biblical aspect to show that the soldiers are godly for going to war.

There is also a lot of imagery to describe the violence of the battle:

“Reeled from the saber-stroke / Shattered and sundered”. In these lines, the verbs “reeled”, “shattered”, and “sundered” gives a clear image of the fighting between the two forces. This verse, “Volleyed and thundered / Stormed at with shot and shell.” shows us that the bullets was flying around them, they won’t stop.

With all these metaphors and imagery, we can imagine ourselves on the battlefield, with the description we can hear trough the lines, the shot and the shout. We can hear the sabers who colliding. We can taste the dust in our mouth but also the taste of blood. We see everything in our mind, the battlefield, the soldiers, the horses, the artillery, the cannon, … because the poem is very eloquent.

The theme of the poem was that the admirable qualities of these soldiers, such as bravery, strength, and determination. And the last lines show it well:

“Honor the charge they made! / Honor the Light Brigade”.

The author uses imagery to describe the determination of these soldiers because even if they were “volleyed and thundered / Stormed at with shot and shell”, they continued to attack the Russians. We can see through the poem, that the soldiers are very brave because they continue to fight even if there is a countless of dangers on the battlefield. Also, the poem shows the strength of the soldiers because they were losing men and they were still victorious:

“While horse and hero fell”

Furthermore, in this lines:

“Charging an army, while / All the world wondered”, the author want to show that the “world” is full of men like those soldiers, brave and strong. The soldiers know there is a mistake and that they are going to be massacred but they are still going to fight.

Theirs not to make reply,

Theirs not to reason why,

Theirs but to do and die:

Into the valley of Death

And this shows how valiant they are.

To conclude with this analysis, I want to say that this poem is hard to understand, but when you read trough the lines you can realize what really happen during this war. We can feel everything, because the words and the imagery, which are use in this poem, have a lot of meaning. We can put ourselves in the head and in the body of the soldiers.

The Tennyson's message in The Charge of the Light Brigade. (2020, Jun 01). Retrieved from https://studymoose.com/charge-light-brigade-new-essay 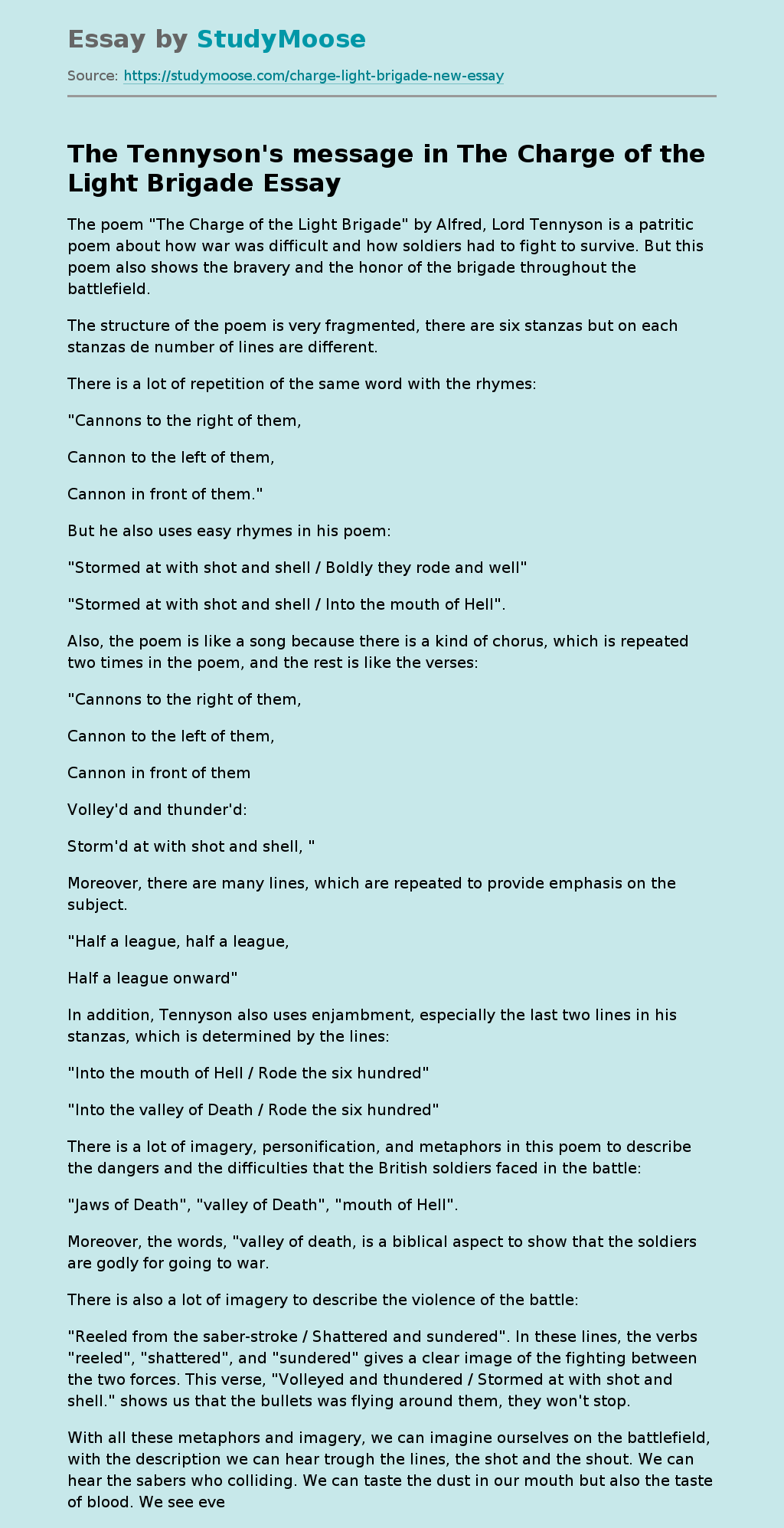