A Poem Crossing the Bar by Lord Alfred Tennyson

Lord Alfred Tennyson’s Crossing the Bar is an allegory of death, envisioned as a journey on an infinite sea. The speaker in the poem, who is the author himself, muses on the call that advises him to “cross the bar”. The whole work is therefore constructed on this principal metaphor, the crossing of the sand barrier and the plunge into the boundless journey on the sea. What is significant in the poem is the method which Tennyson perceives death. While death is normally viewed as closure, in Crossing the Bar it is comprehended as a religious encounter.

Turn in your highest-quality paper
Get a qualified writer to help you with
“ A Poem Crossing the Bar by Lord Alfred Tennyson ”
Get high-quality paper
NEW! AI matching with writer

Death is not only the resolution of earthly life but also the beginning of the afterlife. The imagery of the poem is very suggestive for the death style. Notably, the poet does not concentrate on the end of life and the pain of separation, but only on the experience that anticipates him after death. The fact that death is imagined as a threshold and afterlife as a large sea indicates that the author embarks on this journey without regret.

The journey is implied to start at twilight, which again alludes to the end of life and the beginning of a new experience: “Twilight and evening bell,/ And after that the dark!

” (Tennyson 203). The poet also emphasizes that there should be no mourning to accompany him, as he crosses the bar. This idea enhances the poet’s optimistic view of death. The only sound to be heard, that of the dormant tide, is also symbolic.

First of all, the drowsiness of the sea emphasizes the idea of death. Also, the retractile movement of the waves expresses the idea that the idea that the traveler will not return from his voyage this time. Death will only be the beginning of eternity and the poet will find the divinity on the other side: For tho from out our borne of Time and Place

The flood may bare me far, I hope to see my Pilot face to face When I have crost the bar. (Tennyson 203) The place after death cannot be mapped by earthly coordinates, such as time and place. Interestingly however, there remains one valid landmark which ensures that the poet will never get lost or suffer in solitude: the pilot. The pilot is obviously a symbol for the spiritual guidance offered by the divinity in both earthly existence and in the afterlife. Thus, Tennyson’s Crossing the Bar is a metaphorical representation of death, as a voyage into the infinite unknown.

The sand bar represents death, while the unlimited sea is the symbol of everlasting life. The most striking figure of the poem is the pilot, an image of the divinity, who awaits the poet on the other side. The boundless sea lacks any earthly coordinates, while it retains only that of spiritual guidance. Through this poem, Tennyson represents death as a passage into a purely spiritual life, guided by God. ? Works Cited: Tennyson, Lord Alfred. Selected Poems (New Oxford English Series). New York: Oxford University Press, 1963.

A Poem Crossing the Bar by Lord Alfred Tennyson. (2016, Sep 05). Retrieved from https://studymoose.com/a-poem-crossing-the-bar-by-lord-alfred-tennyson-essay 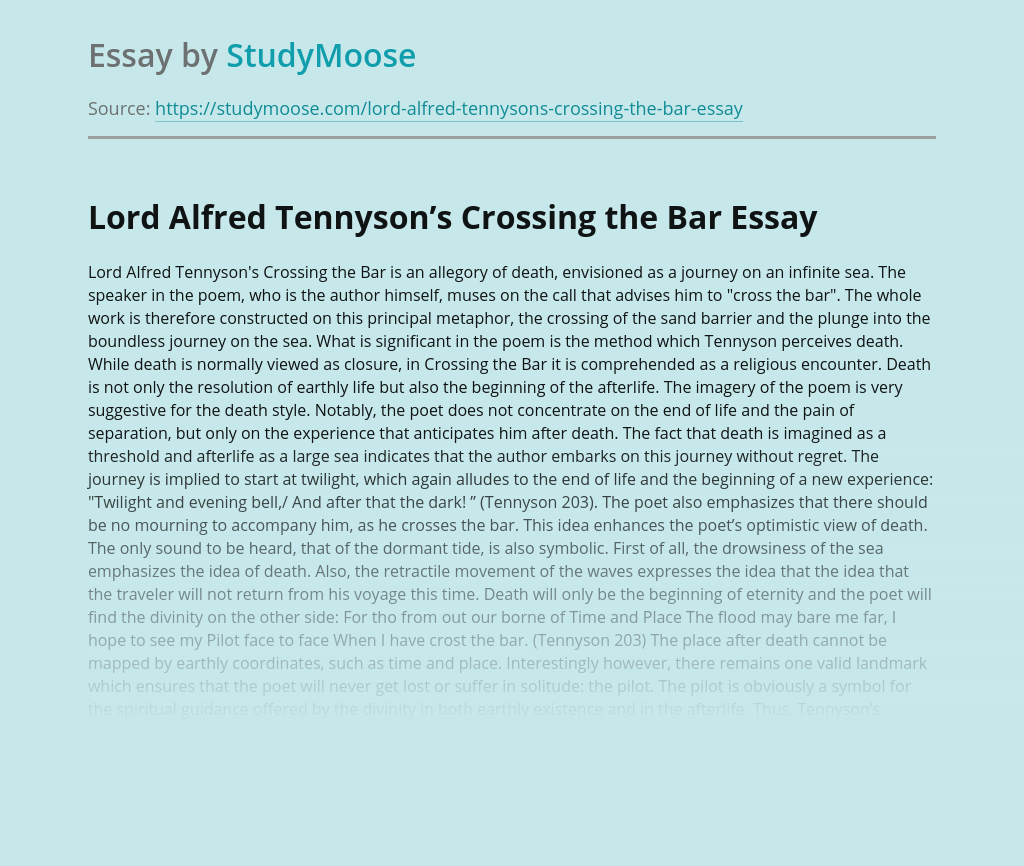 Turn in your highest-quality paper
Get a qualified writer to help you with
“ A Poem Crossing the Bar by Lord Alfred Tennyson ”
Get high-quality paper
Helping students since 2015
Stay Safe, Stay Original