The Charge of the Light Brigade

Alfred Lord Tennyson’s poem, “The Charge of the Light Brigade”, is one that triggers so many emotions, both good and bad. When I read this poem, I felt inspired and sad, motivated and angry, all at once. This poem was so powerful that I read it again just because of how captivated I was by it. In this poetic analysis, I will explain Tennyson’s background and the story of the poem, themes that I noticed, stylistic form, critical opinions, and the emotions that Tennyson strives for his readers to feel.

Don't use plagiarized sources. Get your custom essay on
“ The Charge of the Light Brigade ”
Get custom paper
NEW! smart matching with writer

Alfred Lord Tennyson was a popular, well-known British poet in the late 19th century- early 20th century. He was Poet Laureate of Victorian England, the period of Queen Victoria’s reign. Other short poems of his include, “Crossing the Bar”, “Ulysses”, and In Memorium: A.H.H., in honor of his late friend and fellow classmate at Trinity College and Cambridge, Arthur Hallam. (Everett 1) Tennyson’s poem “The Charge of the Light Brigade” was published in 1954.

This tragic poem is about a brigade or group of 600 soldiers who rode into the “valley of death”. The soldiers rode into enemy grounds, obeying their leader’s commands to charge forward and attack. Unfortunately, his commands put the brigade of soldiers in an impossible fight that they could not win. Nevertheless, the poem symbolizes the honor and heroism that each of the 600 soldiers embodied, as they fought with absolute courage to the very end of defeat.

There are a few themes that are shown in this tragic poem.

The first theme that I will talk about is loyalty and duty as soldiers. The soldiers have a duty to their people to fight, and have a loyalty to their commander to obey his orders. Part of what makes this such an appealing story of heroism is that it ends tragically. I think back to when Pat Tillman, a star football player in the NFL, sacrificed his lifelong goal of playing professionally to enlist in the army. He became a true hero to people around the world for showing the ultimate loyalty and dying for his country. His story is much more heroic because he tragically died in battle. The soldiers in the poem have their commander’s back, regardless of what he chooses. If he tells the brigade to charge, then they do it, no questions asked. This theme of duty and loyalty is present in the second stanza, lines 13-15, “Theirs not to make reply, theirs not to reason why, theirs but to do and die.” (Lines 13-15) This statement represents everything the soldiers are taught and believe in. The soldiers don’t ask why, they just do what their leader says.

The loyalty of the soldiers to their commander makes me appreciate the courage of each one of them even more. Another theme of this poem is war and death. These soldiers are ordered to charge an enemy group and fight. This poem uses intense war descriptions; anyone who reads this poem gets a good feel that these soldiers are stuck in a battle for their lives. One intense war description, “Cannon to the right of them, cannon to the left of them, cannon in front of them volleyed and thundered.” (Lines 18-21) This part gives a sense that the soldiers are surrounded by enemy weaponry. The cannon shots are described in a vivid way, comparing them to the loudness of thunder. Tennyson explains that the soldiers rode, “Into the jaws of death, into the mouth of hell.” (Lines 24-25) If there were two places I would not want to go in my life, it would definitely be the “jaws of death” and the “mouth of hell”. Those sound like the worst possible places to be, so I get a clear image of the soldiers charging directly into the most dangerous circumstances. The tragedy of this poem is that this brigade of soldiers, with so much loyalty and courage, are ordered to fight in a battle they can’t win. I can relate this somewhat to Rocky IV when Sylvester Stallone fights the enormous Russian machine, Ivan Drago.

Rocky’s wife, Adrian, tells Rocky before he leaves for Moscow, “You can’t win Rock.” But, because it’s a Hollywood storybook sports-movie ending, he uses that as motivation and beats Drago against all odds. Tennyson’s poem reminds me of this movie because the soldiers are against all odds to win this battle but they don’t know it. Rocky knew that his chances of winning the fight were slim to none, which made him focus that much harder. It makes me wonder, if the brigade’s commander had told them that the battle would basically be a suicide mission, maybe they would’ve miraculously conquered their enemy.

The form of this poem uses six stanzas, some with more lines than others. The rhyme scheme of the poem changes with each stanza. Frequently, Tennyson uses the same rhyme scheme for multiple lines. For instance, “Flashed all their sabers bare, flashed as they turned in air, sabering the gunners there.” (Lines 27-29) Other times, he uses the same word to start and end lines for consecutive sentences. An example of this, “Cannon to the right of them, cannon to the left of them, cannon behind them.” (Lines 39-41) This rhyme scheme, in my opinion, makes the attack that the soldiers are facing much worse. The form of the lines gives a little more vividness and imagery to the poem. As for the rhythm of the poem, the movement or pace changes from stanza to stanza. I feel like the beat slows down at the end of every stanza, when it says, “Rode the six hundred.” The movement gets slower at the end because of the tragedy and sadness of the story. The fastest part of the poem is when the cannons are used in three consecutive lines.

Some people can be critical of this poem because it glorifies the heroism of a group of soldiers that died a senseless death. Stefanie Markovits, author of Giving Voice to the Crimean War: Tennyson’s “Charge” and Maud’s Battle-Song, is critical of the line “do and die” rather than it saying “do or die”. “In Tennyson’s version of the phrase, the soldier faces not a choice or chance between heroic action and martyrdom but an inevitable conflation of the two.” (Markovits 11) The death of the brigade of soldiers is seen as senseless because they have no option other than to be killed in battle. Personally, I like how Tennyson chooses for the soldiers to be killed, making them heroic and noble. This brings me back to the Pat Tillman situation; he died in battle fighting for his country, which ultimately made him an even bigger hero than he would’ve been had he survived. Tennyson was thinking a similar way when he made the soldiers die for their people, with the utmost loyalty for their commander and each other.

In conclusion, Tennyson’s poem is such a powerful piece of writing because it takes a tragic story and turns it into a story of courage and heroism. What ignites so many emotions is that these soldiers sacrificed themselves because it was their duty. They obeyed the orders of their commander no matter the consequence. The last line of the poem sums up their heroism, “Honor the Light Brigade, noble six hundred.” (Lines 54-55) These ordinary soldiers are reflected as noble for fulfilling their duty with loyalty and courage.

The Charge of the Light Brigade. (2016, Mar 07). Retrieved from https://studymoose.com/the-charge-of-the-light-brigade-essay 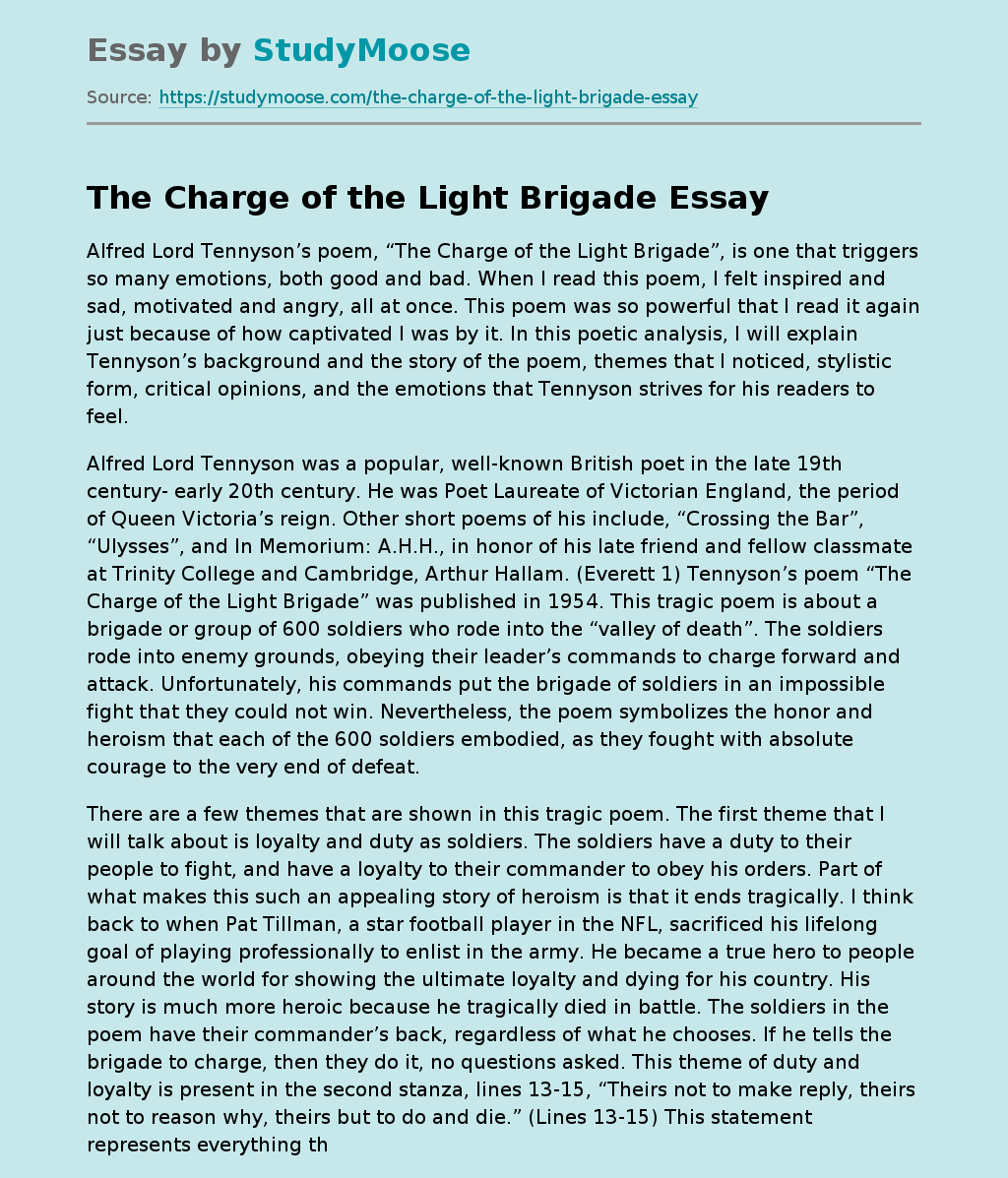