Those qualities which made Othello heroic (or admirable or exceptional) also caused his suffering. To what extent is this statement true?

Tragedy is one of the oldest genres of drama, and has roots in Greek of antiquity. It has been practiced throughout the centuries. One such tragedy is William Shakespeare’s Othello, which follows the downfall of its eponymous tragic hero, Othello. However the definition of a tragic hero has changed throughout history, with many intellectuals offering their own opinions. On such man was A.C. Bradley, a renowned English literary scholar, remembered mainly for his analysis of the works of William Shakespeare.

Don't use plagiarized sources. Get your custom essay on
“ Those qualities which made Othello heroic (or admirable or exceptional) also caused his suffering. To what extent is this statement true? ”
Get custom paper
NEW! smart matching with writer

A.C. Bradley describes a tragic hero as “…a person of high degree or of public importance…

But this is not enough. His nature is also exceptional, and raised him in some respect above the average level of humanity.”[1] By studying the play, and A.C. Bradley’s definition of a tragic hero, it becomes obvious that the qualities that make Othello heroic also cause his suffering. However they do not do so alone. Iago’s ambitions to cause Othello suffering turn Othello’s admirable characteristics against him.

By examining three of Othello’s heroic qualities, this relation between Iago’s desires and Othello’s distress can be revealed. The first of these characteristics is Othello’s position of power, whose consequences lead to Iago’s hatred. The second is Othello’s easily trusting nature, which causes the initial success of Iago’s plans. The last characteristic is Othello’s sense of reputation and honour which lead to the realization of Iago’s ambitions.

One of the first aspects of Othello introduced in the play is his leadership.

Othello’s place in Venice gives him a considerable amount of power. This can be seen near the beginning of the play in the conversation between Iago and Othello. Iago mentions Brabantio’s anger at Othello’s courting of Desdemona, and describes him as, “[Brabantio] is much beloved, / And hath in his effect a voice potential / As double as the Duke’s” (I.2.12-14). In these lines it becomes apparent that Brabantio has enough power in Venice to possible even rival the Duke’s. However Othello does not worry as he says, “Let [Brabantio] do his spite” (1.2.17). Othello knows that his own influence on the Duke and other senators due to his military leadership “Shall out-tongue his complains” (1.2.19). These quotes therefore reveal that Othello has power in Venice.

They also prove that his higher than average status helps him escape Brabantio’s accusations, and is therefore a beneficial and desirable quality to possess. However it is this same power that leads to the start of Iago’s hatred. As Iago tells Roderigo earlier in the play “Three great ones of the city, / In personal suit to make me his lieutenant / Offcapp’d to him /…But [Othello]… / Nonsuits my mediators” (1.1.9-17). This quote illustrates that Othello had enough power to reject the three men who are described as great, and offer an explanation of Iago hatred. It is not only Othello’s choice, but his ability to make the choice that Iago detests, as Iago himself is a merely “…His Moorship’s ancient” (1.1.34), and thus possesses no power of his own. The decision of who to promote instead rests in Othello, and his choice is Cassio. As a result, Othello’s position of power, which is helpful to Othello normally, also gives birth to Iago’s first thoughts of disloyalty against Othello, and marks the start of his plot to bring Othello suffering.

Moving on, another major aspect of Othello’s character is his trust. Othello puts his trust in other characters easily. This quality is demonstrated when he is called to the Duke’s meeting, and Brabantio blames him of stealing Desdemona through dark magic. Othello however trusts the Duke to provide justice. Also when asked to prove his innocence, he further says ‘Send for [Desdemona] to the Sagittary / And let her speak of me…” (1.3.117-18). Here, Othello begins to illustrate his trust in Desdemona. He continues, “If you do find me foul in her report, / …but let you sentence / Even fall upon my life” (1.3.116-21). Othello is willing to risk his life, because of his utter confidence in Desdemona. Evidently his trust is not misplaced, as both the Duke and Desdemona do not betray him. The Duke does in fact allocate justice, and Desdemona supports Othello, proving his trust is a helpful attribute. However the downside of his trust starts to already become apparent in the same scene. When the Duke asks Othello to leave an officer behind to transport all of Othello’s “things..of quality and respect” (1.3.285) to Cyprus, Othello replies with “…my ancient / A man he is of honesty and trust. / To his conveyance I assign my wife” (1.3.286-88).

Othello trusts Iago enough to entrust him not only with his possessions, but with Desdemona herself. Desdemona is of extreme importance to Othello, and the fact that he is willing to hand her over to Iago, demonstrates his blind trust in Iago. This is an obvious mistake as immediately after Othello assigns his wife to him, Iago utters “…He holds me well. / The better should my purpose work on him” (1.3.391-92), and also “The Moor is of a free and open nature, / That thinks men honest that but seem to be so, / And will be led by the nose” (1.3.399-402). Iago himself realizes that Othello is easily trusting, and plans to use this against him. He believes that this easy trust will allow him to further his ambitions as Othello will be easy to fool. In Cyprus, this is proven true as Iago constantly poisons Othello’s mind against Desdemona. For example he says, “Or [Desdemona] be naked with [Cassio] in bed” (4.13-4). Slowly, through planting ideas into Othello’s mind such as this one, Iago torments Othello and creates problems in his marriage. Othello’s trusting nature, which had been helpful previously, is turned against him and gradually becomes the reason behind the success of Iago’s plan to cause suffering.

Lastly, Othello also possesses a grand reputation. The audience is told of Othello’s prestige, which he had even at birth. In fact one of Othello’s first lines in the play states “—I fetch my life and being / From men of royal siege…”(1.2.21-22). This line reveals Othello’s himself is of royal background. This background information already builds up Othello beyond the average character. This impression of Othello is further strengthened through the both Dukes and the Desdemona’s description of him, “Valiant Othello” (I.3.50) and “[Othello’s] honour and valiant parts” (1.3.256), respectively. Here other characters, besides Othello, also consider Othello to have a good reputation. His reputation in fact is the force behind his influence in Venice. In the same scene Othello, after petitioning for Desdemona to accompany him to Cyprus, insists that Desdemona will not distract him from his duty. If that were to happen he says, “…all indign and base adversities / Make head against me estimation” (1.3.276-77). This quote shows the importance of reputation and honour to Othello himself.

He attempts to describe the worst thing that would occur if he were to shirk his responsibilities, and decides that it is a tarnished reputation. Iago himself in fact also knows of the importance of honour to Othello, and hence uses it to manipulate him. For example, he declares, “Good name in man and woman, dear my lord, / Is the immediate jewel of their souls” (3.3.168-69). Through careful word choice and making sure to appeal to honour, Iago implies that the concept of reputation is also important to him, increasing Othello’s trust in him. This increased trust can be used to manipulate Othello even more easily in the future.. As Othello becomes convinced that Desdemona has committed adultery, he tells her, “Had it pleased heaven / To try me with affliction… / I would have found… / …patience” (4.2.49-55). He insists that even if he was captured, disease-stricken, or poor he still would be able to handle all the misfortunes. However, he goes on, “…But, alas, to make me / A fixed figure for the time of scorn / To point his slow and moving finger at!” (4.3.55-57).

Othello shows again that what is actually important to him is that Desdemona has ruined his honour. Her disloyalty will cause society to look upon him as a laughingstock, and destroy his reputation. Othello’s belief in the destruction of his reputation plays a part in his eventual murder of Desdemona. Also, at the end of the play he echoes the description of him at the play’s beginning by the Duke and Desdemona, and says “I am not valiant neither, / …But why should honor outlive honesty? / Let it go all” (5.2.252-55). It is only after the murder that he realizes Desdemona is innocent. Othello comprehends that he did in fact lose his honour and reputation but it was through the act of murder of his wife. He loses the will to live itself, and as his question of his honour lasting longer than his integrity foreshadows his suicide. Through the manipulation of his reputation and honour, which was so useful to him previously, Iago inflicts the greatest suffering on to Othello, and though he is caught, his ambitions are finally realized.

In summary, Othello possesses the exceptional qualities mentioned in A.C Bradley’s definition of a tragic hero. The qualities are valuable to him at the play’s beginning, but are turned against him. It is through Iago’s ambition to destroy the Moor that Othello’s qualities transform from admirable attributes to the root of his suffering. His power and authority, a desirable characteristic, goes from helping him influence others to inciting Iago’s hate, and starting the process of his downfall. His trusting nature leads him to placing his faith in Iago, thus allowing the latter in accomplishing his intentions. Lastly his reputation eventually leads to his fixation on his honour, and eventually ends in his death. Othello features a character that suffers throughout the book, and his heroic qualities along with Iago’s ambition lead to the play’s tragedy.

Those qualities which made Othello heroic (or admirable or exceptional) also caused his suffering. To what extent is this statement true?. (2020, Jun 02). Retrieved from https://studymoose.com/qualities-made-othello-heroic-admirable-exceptional-also-caused-suffering-extent-statement-true-new-essay 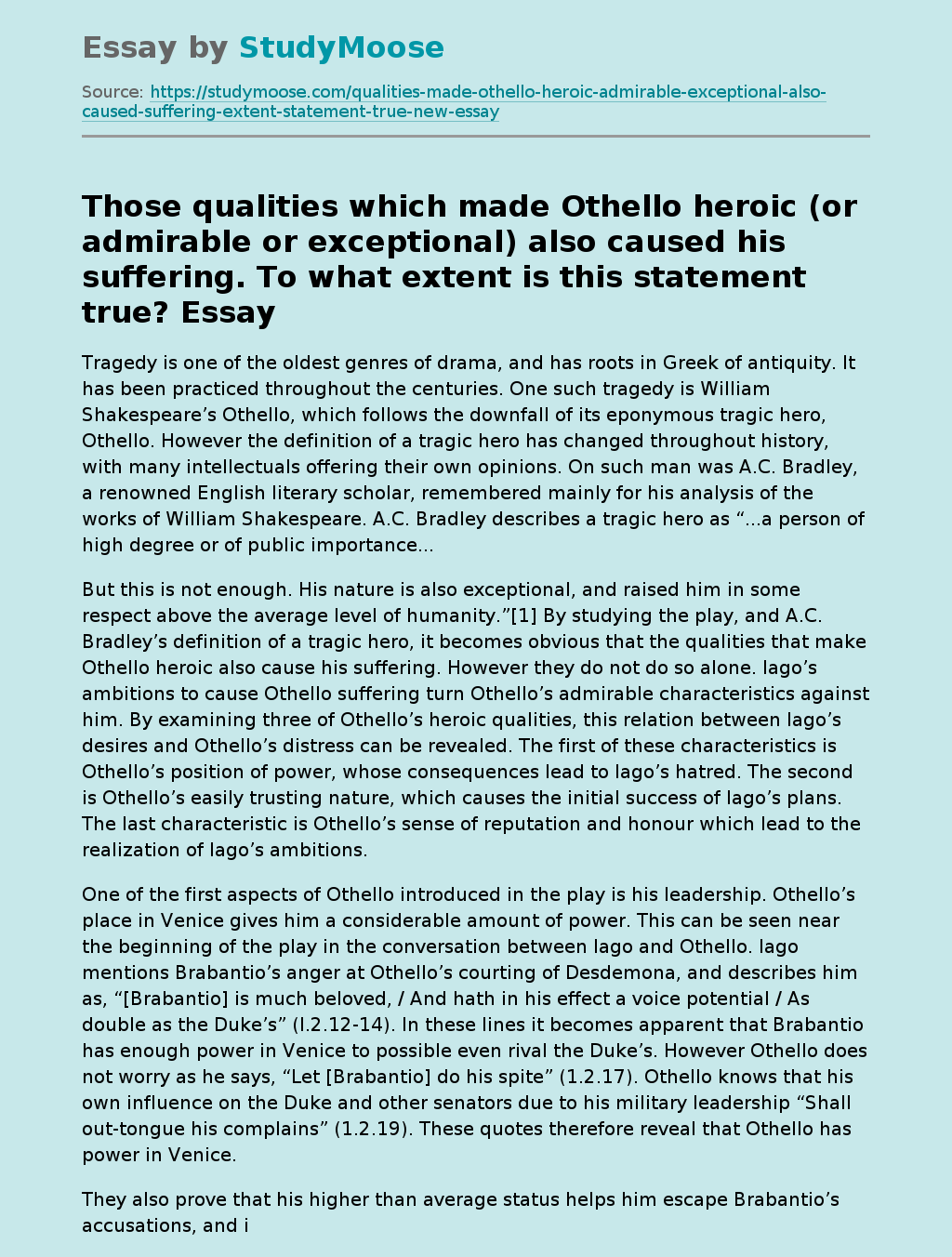