Heroism and cowardice in the Odyssey

The most respected and venerated social group in Homeric times was that of the heroic warriors and kings. These were the people who lead their armies into battle and won accolades for their valor or courage displayed on the battlefield. The cowardly on the other hand, were subjected to strong prejudice. Their existence was considered a burden on the earth and they were ignored and ridiculed by everyone. This is evident in the Odyssey when Homer describes the incident of Elpenor’s death.

“There was one called Elpenor, the youngest of the party, not much a fighting man and not very clever.

This young man had got drunk and gone to sleep on the roof of Circe’s palace. Roused in the morning by the bustle and din of departure, he leapt up suddenly, and forgetting to go down the ladder and take the proper way down, he toppled headlong down the roof. ” As is clear from this description, Elpenor’s death was never much of an issue for Odysseus or his crew, who laughed it off and ignorantly left his body unburied in their haste to go to Hades, because stupid and cowardly Elpenor was not worth mourning for.

However the unparalleled sorrow expressed at the deaths of Agamemnon and Achilleus was justified because they were great heroes who deserved to be lamented. Elpenor’s body was only buried when he himself reminded Odysseus to bury him lest he (Odysseus) incurred the wrath of the Gods, at leaving a human corpse unburied.

The suitors on the other hand were considered fine men in their own right-handsome and brave. It was only their wanton misuse of Odysseus’s property in his absence and their disrespectful attitude towards Penelope that turned many of the Gods against them.

The suitor’s willful insolence directed at the property and wife of an absent man was seen as an act of cowardice and thus excited the wrath of the Gods. The suitors in truth were no more than mere cowards as was evident when they tried to make truce with Odysseus in the following lines-“So spare us, who are your own people. And afterwards we will make amends to you by public levy for all the food and drink that has been consumed in your house. ” Thus they truly deserved their end and there were to be no tears shed in their memory because their cowardly acts had subjected them to an ill-fated end.

Homer thus defines a hero not only to be handsome and brave but also god fearing, hospitable and one who never takes unfair advantage of others, especially in their absence. This is also evident in the Iliad when Paris’s abduction of Helen in Menelaus’s absence seals both his fate and that of his homeland- Troy. Odysseus is the only character in the Odyssey who thus comes closest to the ideal of the ‘hero’. He is strong, handsome, brave, and also intelligent and witty. In Homer’s world, no hero is complete without being endowed with the gift of intelligence and astuteness.

Odysseus displays his acumen on many occasions-the encounter with Polyphemus the Cyclops and Circe, just to name a few. Odysseus also seems to be the master of deceit as is evident from the countless tales of trickery he tells people in order to avoid detection. In Homer’s eyes, this treachery on the part of Odysseus is justified as he is only trying to protect his own interests without harming anybody else’s. However despite these heroic qualities, Odysseus fails to live up to the ideal of the true hero.

In the final conflict with the suitors, Odysseus thinks nothing of shooting a whole quiver full of arrows at unarmed men but his knees go weak the minute he sees the defenseless acquire some form of defense. This is evident from the following lines: “when Odysseus saw them putting on armour and brandishing great spears in their hands, his knees quaked and his heart failed him. ” Odysseus also disguises himself as a beggar instead of appearing in his original form before the suitors because he is scared of their numbers.

But despite his infrequent acts of cowardice the Gods still support him and help him in his endeavor to rid his house of the suitors. This is because the very idea of his returning home after twenty years to restore his house and rescue his wife is very heroic and thus the means by which he achieves this end can be ignored. One cannot also help but think that it is more of the Goddess Athene’s help than Odysseus’s courage and bravado, which ultimately wins the day for him. This is evident from the following lines: “the six did as he ordered and threw with all their might.

But Athene made the whole volley miss. ” Athene herself made the suitors’ aims miss, but rather partially helped Odysseus’s lances meet their targets. Hence the impartial help of the Gods was the main reason behind Odysseus’s success. But this supernatural aid can be seen as a reward for past bravery and suffering on the part of Odysseus and as a punishment for cowardly insolence on part of the suitors. Hence the theme of cowardice and bravery plays a big part in the Odyssey. The book does take a certain amount of interest in the fate of the cowardly, but its primary focus rests with the heroic.

Even the Gods favor the brave over the cowardly. The Gods take a supreme interest in the death of the heroic be it through noble (e. g. Achilleus fighting on the battle field) or poor means (e. g. Agamemnon killed by his wife and her lover) but as long as the cowardly are given a decent burial, the Gods don’t care about them and their name is never mentioned in their premises. (E. g. Elpenor’s death) People who have behaved in a way not suiting their status are also condemned to a coward’s death (e. g. : the suitors) and the Gods do not lament their end.

Heroism and cowardice in the Odyssey. (2017, Aug 17). Retrieved from http://studymoose.com/heroism-and-cowardice-in-the-odyssey-essay 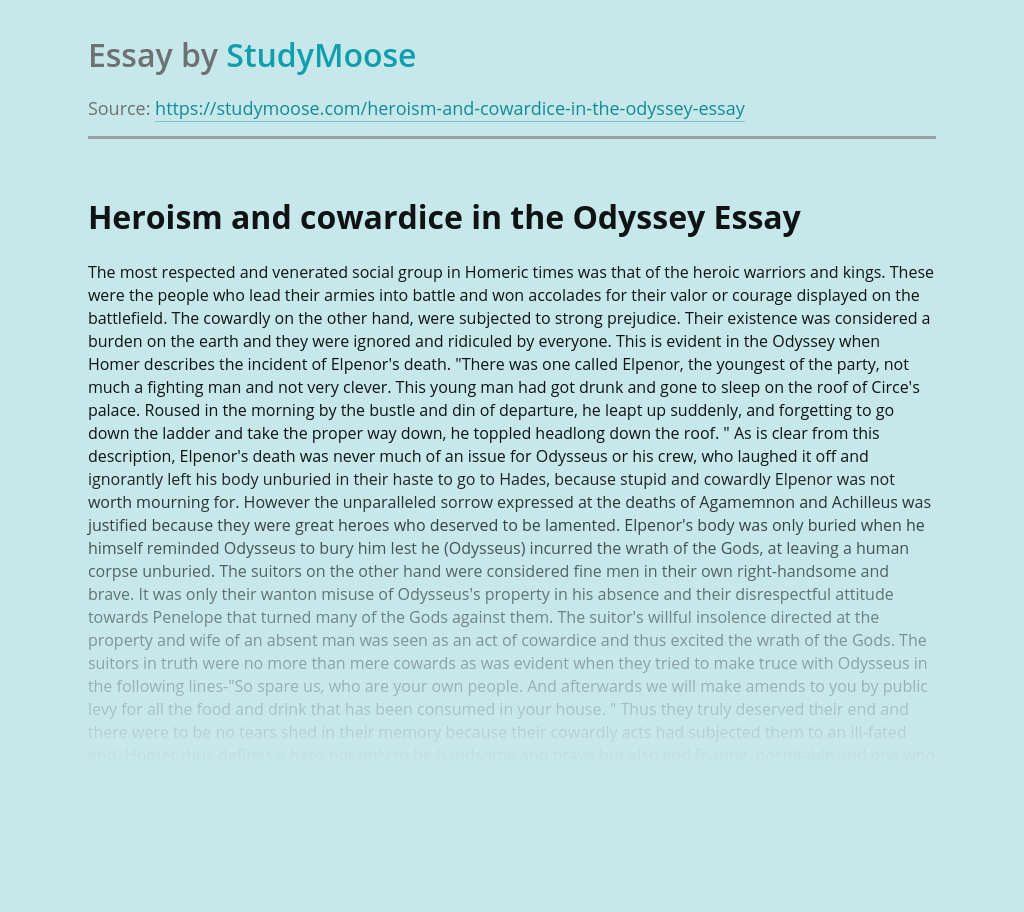 Don’t waste time
Get a verified expert to help you with Heroism and cowardice in the Odyssey
Hire verified expert
$35.80 for a 2-page paper
Stay Safe, Stay Original