Self-sacrifice is a true act of Heroism. This concept is echoed in Ralph Waldo Emerson’s text: Heroism. Emerson is of the belief that everyone possesses the innate ability to be a hero, i.e. heroism is not a preserve of a selected few, rather, it manifests in individuals who acknowledge their worth and endeavor to maintain self-trust in their actions. Nonetheless, the concept of heroism also has to be cultivated. Philip Zimbardo in his video guide: The Psychology of Evil believes that as society subjects people to different social environments where evil lurks, people become highly prone to commit evil.

Don't use plagiarized sources. Get your custom essay on
“ Opinions on Heroism and Evil in Ralph Waldo Emerson’s Heroism and Philip Zimbardo’s The Psychology of Evil ”
Get custom paper
NEW! smart matching with writer

It is, therefore, important for people to understand their vulnerabilities, i.e. things that will provoke them into committing evil, and develop situational awareness so as to repress probable evil acts and instead only nurture true heroism. As such, people need to learn how to cultivate their true heroic act in the face of numerous socio-environmental difficulties. It is thus true to say that, heroes are made in the hour of defeat.

This paper aims to synthesis Emerson’s and Zimbardo’s text on heroism and evil and analysis their stand on the concept of heroism. Emerson defines the hero as a person who obeys a secret impulse of his character. “All men have wandering impulses, fits and starts of generosity. However, when you have resolved to be great, abide by yourself, and do not weakly try to reconcile yourself with the world. The heroic cannot be the common, nor the common the heroic.

” (Emerson 91). A hero does what he is afraid to do; he sacrifices his own life without expecting any reward. This is by self-trust and reliance, for if a hero has no conviction in his capabilities, he fails to achieve whatever it is that he proposes to himself. Ideally, a hero is consistent in his generosity; he is hospitable, temperate and dauntless. Emerson further writes, “A hero has a mind of such a balance that no disturbances can shake his will, but merrily follows the music of his heart” (Emerson 130). Nonetheless, only a few people in the society inherit such qualities. Not everyone considers it noble to risk their own lives with the intent of saving others.

Still, others might risk their lives to save others but will eventually expect honors, recognition and a reward. These characteristics do not hail of true heroism. Furthermore, heroes do not sing along of their fame, but set their own tune in life for others to sing, all the while maintaining their own defined moral integrity which serves to set them apart from other conformist social destitute within their circles. There is thus a universal need for people to seek out for true heroism-persons to emulate morally. By this, Emerson believes that heroes hail from their individuality of uprightness and as such, man’s natural state is most pure when at the individual level. This is besides man’s lifelong indoctrination in the hands of social institutions which have made the notion of individuality dull and made people succumb to the public identity of group culture.

As a result, the instinctive drive to reverse the group culture and bring out the person that is ready to step out of the collective and find recognition for his deeds is difficult, though this concept still permeates through the surface of people’s most basic personal expressions, i.e. humanity instinctively recognizes heroism, not by social priming. Hence, a hero’s character cannot be qualified culturally, but merely recognized. In pursuit of understanding the anti-social behavior of persons such as violence, torture and terrorism, Zimbardo on the other hand conducted numerous experiments to unearth various variables that make people prone to crime, hostility and murder and the variables that sets others apart in the spirit of heroism. Zimbardo endorsed great reliance on situational variables. As a psychologist, he also considered the dominant dispositional orientation embedded in people and the nature of such factors in affecting their heroic acts. Zimbardo focused on internal factors that people employ in various situations such as personality, character, genetics and pathological risk factors (m. 10:03). This perspective was important in appreciating the integrity of individual functioning and the extent to which human actions may be subject to situational influences that may be quite powerful to resist.

The basic paradigm of Zimbardo’s research was to depict the ease with which ‘ordinary good people are induced into behaving in an evil manner by turning off or on various situational variables. His belief, therefore, is that most ordinary ‘good’ people are susceptible to subtle, pervasive situational forces when in new circumstances where the usual habitual ways of conduct are irrelevant. However, it is the innermost power of resistance to these situational forces that makes up a hero. In addition to the concept of heroism, Emerson pens, “Heroism feels and never reasons, and, therefore, is always right (Emerson 236). The connotation here is that heroes are intuitive they barely follow logic. This is because logic can be stifling and suppressing the sympathy and nobility of intuition. By obeying their feelings, heroes tend to do the right thing, even when it leads them to an unfortunate death.

After all, that is what the concept of heroism is all about. Emerson also notes that the heroic soul sells not its nobleness and its justice, nor seeks to dine nicely and to sleep warm, instead, the core purpose of its greatness is the acuity that virtue is enough; poverty is its ornament. This means that heroes do not desire plenty, but can very well abide by their loss. This is the modesty of a hero that causes him to be revered by the public (Emerson 240). Similarly, Zimbardo posits that in the belief of the dignity of the human character and free will, people have to be keen in acknowledging the various vulnerabilities that they are disposed to in various situations and how they can impact on their actions and other people’s wellness (m. 16. 40). Zimbardo also believes that by learning and developing situational awareness, true heroism can manifest.

As such, Zimbardo embarked on a mission to train ordinary people on how to become everyday heroes in the face of difficulties at home, school, work, in the community and as a nation. This is by training people on how to speak up and out not only for themselves but also for others and in making wise decisions and taking up effective action in challenging situations (m. 18:53). This is he considers the true act of heroism. As broadly seen in the synthesis, heroes are valuable people in the society and they come in form of leaders propelling for positive change. It is thus important to cultivate to true acts of heroism by nurturing good character and habits and by developing situational awareness likely to provoke evil acts and resist acting upon them.

Opinions on Heroism and Evil in Ralph Waldo Emerson's Heroism and Philip Zimbardo's The Psychology of Evil. (2021, Sep 27). Retrieved from https://studymoose.com/opinions-on-heroism-and-evil-in-ralph-waldo-emerson-s-heroism-and-philip-zimbardo-s-the-psychology-of-evil-essay 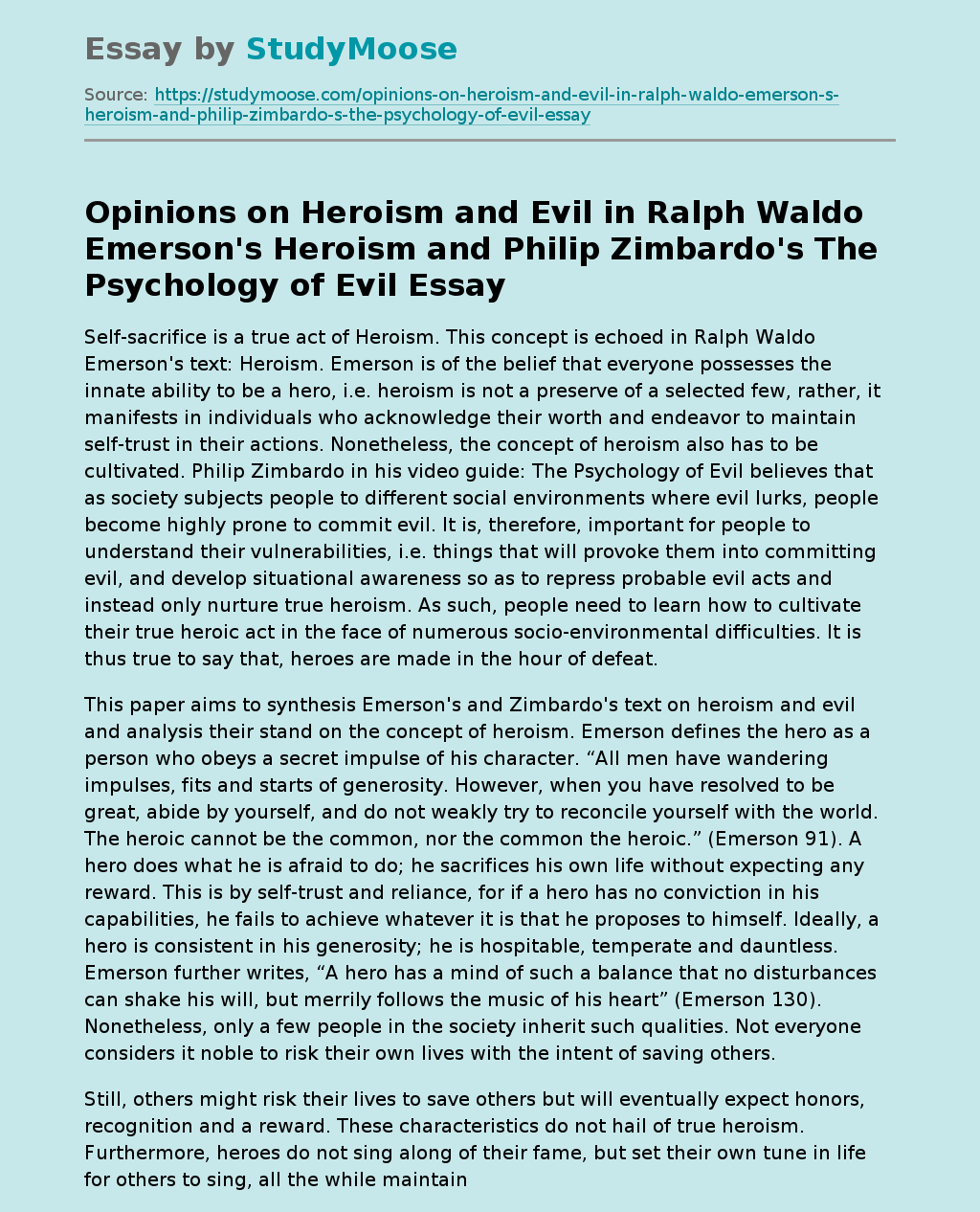