The historical background to the poem is June 16th 1976. This date marks the Soweto Uprising which was initiated in Soweto by black high school students. The students were protesting against being taught in Afrikaans in their local schools. The demonstration was meant to be peaceful and was secretly planned to avoid discovery by the police. On the morning of June the 16th, thousands of youths gathered with the plan to march to Orlando Stadium to hold a rally to air their grievances.

Don't use plagiarized sources.
Get Your Custom Essay on An Analysis of ‘a Young Man’s Thought’s Before June 16th’ – Fhazel Johennesse Just from $13,9/Page

However, their intended route was blocked by riot police, and what had started as a peaceful march turned bloody as police used live ammunition on the protesters.

Evidence shows that many protesters were shot in the back as they were running away. [Readers Digest Illustrated History of South Africa, (1988: 440) and Wikipedia (http://en. wikipedia. org/wiki/Soweto_uprising)] The journey that the speaker is going to go on in lines 1 – 2 suggests a struggle and an ultimate goal to be reached.

The journey has been planned as the speaker refers to ‘tomorrow’ in line 1. He then talks about the road ‘that winds’. This suggests many twists and turns in the journey, which in turn suggests that the journey will not be an easy or straight-forward one.

The words ‘top of the hill’ suggest the end of the journey or the ultimate goal. The final goal or destination will only be reached by means of an uphill struggle. The word ‘only’ is used in line 3 – ‘I take with me only the sweet memories of my youth’. The speaker is ready for his journey and takes with him just what is important – his memories. His memories are his only link to the innocence of his youth, and he knows that the following day, his life is going to change forever – he will lose his childlike innocence and have to face an altered world.

The words ‘my heart aches for my mother’ could convey various meanings. The first of these could be that the young man wishes that he did not have to face the day ahead but could go back to the familiarity and security being a child. He is assuming adult responsibilities of having to worry about his mother, and does not feel ready for this. The second possibility is that the young man’s mother is dead and he misses her. This argument could be supported by the previous line ‘I take with me only the sweet memories of my youth’ in that his childhood was a happy time in his life.

The final image that could be conveyed by these words is that he knows that there is heartache ahead for his mother in that he does not know what is going to happen at the end of the day, but he does not have a positive feeling about it,. The words ‘my heart aches’ could convey that he regrets the heartache that is ahead for his mother. This could be supported by the words ‘sing my sad song sing for me for my sunset is drenched in red ‘. In many cultures, a woman downturns or averts her eyes in the presence of a young man who could be her suitor as a sign of respect.

The ‘old man with a broken brow’ could symbolise a full life (‘old’) and many experiences and challenges (‘broken brow’). Therefore, these individuals and their countenances could symbolise that the young man is, not unrealistically, asking for a normal life with a future (‘woman’) and a fully lived life (‘old man’). An alternative interpretation could be that the young woman’s ‘downtrodden eyes’ symbolises sorrow or shame whilst the old man’s ‘broken brow’ symbolises being broken down or downtrodden.

It is also symbolic that the symbolism of the sunset and the colour red occurs in the last line of the poem as it brings the young man’s life to a close. As outlined in Readers Digest Illustrated History of South Africa, (1988: 440) and in the Wikipedia article (http://en. wikipedia. org/wiki/Soweto_uprising), June the 16th 1976 was the catalyst for political change in South Africa to begin. On this date, thousands of black high school students gathered in Soweto with the intention to march to Orlando Stadium to hold a rally to protest against being taught in Afrikaans in their local schools.

The march had been secretly planned to avoid discovery by the police. The day ended in bloodshed and an official death toll of 23 when the police opened fire on the youths. Many protesters were shot in the back as they were running away. The poem is written against this background. The strong theme of the poem is the mental preparations the young man is making for the day ahead – ‘tomorrow I travel on a road’. He is unsure of what is going to happen but suspects that it will not end well. He is reflecting on what is going to happen and expecting the worst.

There is no punctuation or capitalization used in the poem. The only deviation from this is the use of the capital ‘I’ that is used when the poet is referring to himself. This adds to the emphasis of the young man as the focal point of the poem. The tone of the poem is poignant and sombre which is reiterated by the use of words like ‘memories’, ‘aches’, ‘sad’, and ‘drenched’. The imagery that is used overall reminds one of a funeral procession, not unlike Christ’s crucifixion, as portrayed in the words ‘road that winds to the top of the hill’.

This also brings to mind a feeling of impending sacrifice. This image is further reinforced by the words in line 12 ‘o sing my sad song sing for me’, as this could refer to a funeral hymn. The poet has mentally and physically prepared for the journey ahead as he states in line 3 ‘I take with me only the sweet memories of my youth’. He does, however, have some regrets. He regrets the impact the day is going to have on his mother and he wishes he could be with her, as indicated by the words ‘my heart aches for my mother’ (line 5).

Historically, the march was planned in secret and the students did not tell their parents [Wikipedia (http://en. wikipedia. org/wiki/Soweto_uprising)], so the young man would not even be able to share his plans with his mother. He also regrets that he will not get to experience a normal life. The words ‘I ask only for a sad song’ in line 8 symbolise this regret. In line 10, the old man’s age and broken brow represent an experienced life well lived. In line 9, the woman represents the partner that the young man will never have. (In many cultures, a woman will avert her eyes in the presence of her suitor).

In the young man’s case, he expects that he will have neither – the words ‘I ask only’ indicate an almost pleading expectation that will not be met. In lines 6 & 7, the poet’s ‘heart aches’ for ‘Friday nights with friends around a table with a broad belch of beer’. He regrets the time with his friends that he will not to share. The poem concludes with the young man asking that he be mourned as line 12 states ‘o sing my sad song sing for me’. This is his request that he be mourned, and for a song to be sung at his funeral. He foresees his death when he says ‘for my sunset is drenched in red’.

The sunset represents the end of his life – this is emphasised by the word ‘my’ referring to his life – whilst the imagery of ‘drenched in red’ refers to the amount of blood that will be spilt by the time sunset is reached the following day. June the 16th was a tragic day in South African history, and this poem reflects the sadness of the needless loss of life on that day. It was indeed the catalyst for political change in South Africa. It should always be remembered and used to remind ourselves of where we came from, in order to ensure we never go there again.

An Analysis of ‘a Young Man’s Thought’s Before June 16th’ – Fhazel Johennesse. (2017, Jan 26). Retrieved from https://studymoose.com/an-analysis-of-a-young-mans-thoughts-before-june-16th-fhazel-johennesse-essay 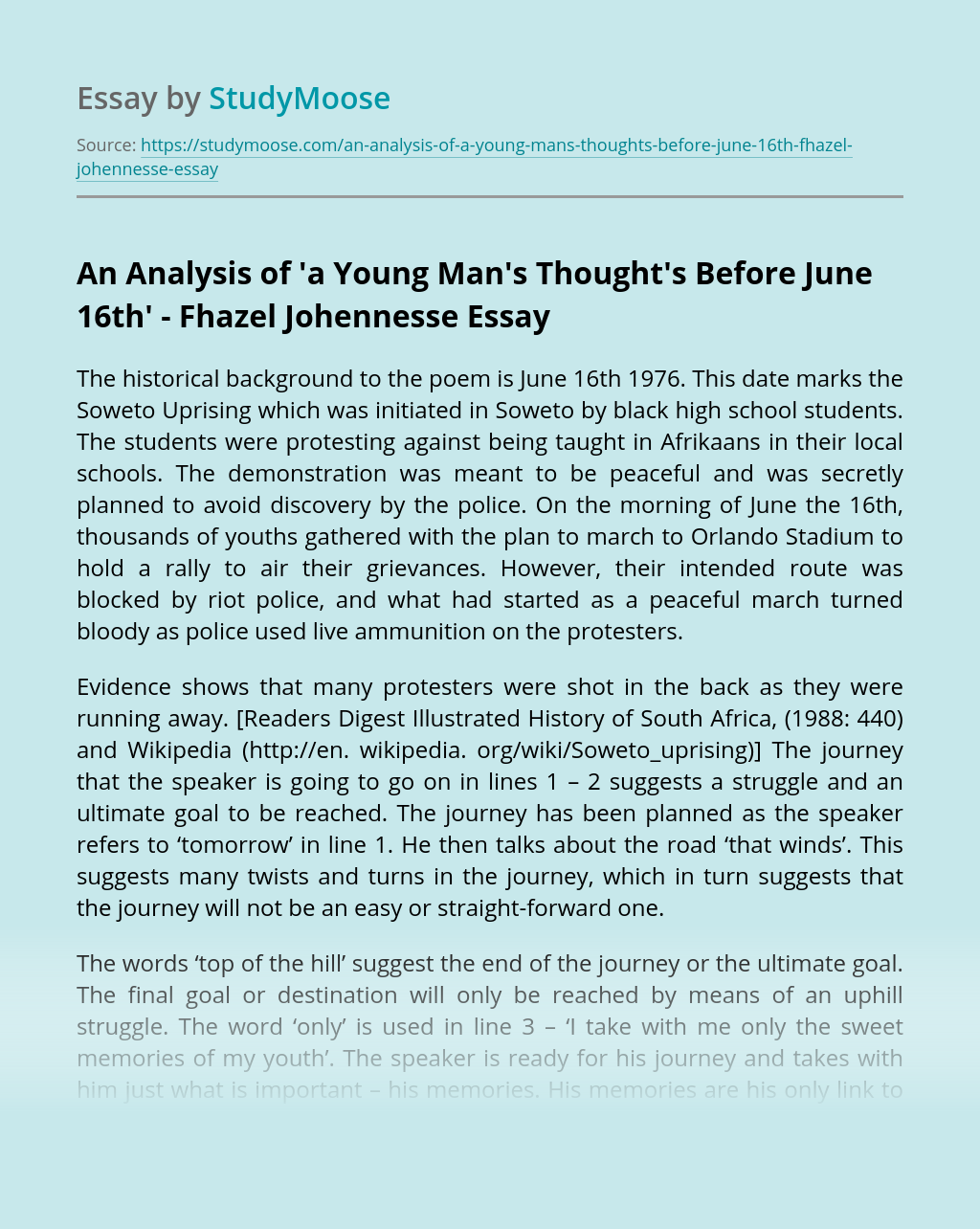