Already in the 16th century Britain had colonies in America and West India, as established in the framework. Simultaneously as the British empire grew, a huge increase in trading was also building up all over the globe. One of the most popular trading products was sugar. The sugar production also led to one of the most inhumane periods of the written history, involving human trafficking and human trading. In this part of the project paper, the main focus will be on how the sugar trade and slave trade grew parallelly during the British empire and how they played a part in the empireґs wealth.

Don't use plagiarized sources. Get your custom essay on
“ Already in the 16th century Britain had colonies in America and West ”
Get custom paper
NEW! smart matching with writer

First and foremost, what is trading? Defined by the oxford dictionary, trading is The action of buying and selling goods and services (Oxford Dictionary, 2019). Trading is a crucial component to a developed society. Trading can impact the globe in many ways, but one thing is for sure, without trading we would not be able to walk around in a store and buy food, clothes and other goods.

During the British Empire, as well as today, trading connected the globe. Before the era of the British empire, people used to buy their clothes from their local market. During and after the empire, your clothes or food was not just locally made. People waited for huge ships to dock and unload goods from the many different parts of the world. Spices from India, tobacco from South America, Champagne from France and of course our main focus in this in-depth part, sugar.

Sugar tradeThe idea of producing and selling sugar was not new in the 16th century. The sugar plant originated in New Guinea and was spread through the Middle East by the Arabs. It is thought to have been introduced to South America by Columbus in the year 1494 (Study Moose, 2018). After Columbus introduced sugar to the new world, nothing has ever been the same. The demand and crave for sugar skyrocketed and has not dropped since (Sugar Cane, 2019).By the 17th century, sugar was considered a luxury commodity only available to the wealthy people in the society. However, between 1700 and 1800, drinking coffee imported to Britain became more and more popular and the want for some sugar in the coffee increased. The colossal demand for sugar resulted in imports to Britain expanding with 800 percent. Importers quickly understood that ludicrous profits could be earned from sugar production (Sugar Cane, 2019). Producing sugar canes demands perfect conditions to be able to be made into sugar. It needs yearlong warm weather, preferably between 1100 and 1500 mm of rain as well as a fairly sunny, cool and dry season (Sugar Cane Crop, 2018). Growing sugar canes in Britain is therefore as good as impossible. Sugar importers found out that Barbados and Jamaica were ideal places to establish sugar plantations because they had the ideal climate and perfect fertile soil to grow them in. By that time, as established in the framework, these two islands were under British rule. Britain therefore won the sugar lottery and could quickly form hundreds of plantations on the two islands. Slave TradeLocation was not the only factor that was needed to grow sugar canes. The production also needed a lot of man power. This is where one of history’s most inhumane periods started, which we can still see aftermaths from today. Owning a successful plantation both gave you wealth but also status. On the other hand, working on a plantation was the exact opposite. Working at a sugar plantation was hard work, since the plants need a hot and dry environment, the workers had to work in those same hard conditions. Therefore, most people did not desire work on the plantations. Still, the rapidly growing demand made the government and plantation owners smart. The government started to send criminals overseas to work on plantations, which worked for a while. Unfortunately, when plantation owners understood that the more workers meant more production of sugar, and only criminal workers was not enough, they started to look elsewhere (Salmon, 2018). During the period where the first plantations was set up in the Caribbean in the 17th century, the British empire also had outposts on the African continent. This is already covered shortly in the framework. What is not covered in the framework, is the fact that Britain forcefully moved people from their homes, made them cross half the earth to work on sugar plantations. In terrible conditions, with little to none food, cramped up in small places they had to work day in day out so the Brits could bask in sugar. The absolute worst part about it all, was that the British slave traders did not care if the slave was a man, woman or even a child. If they could work, they could be sold as a slave. The Triangular tradeThe connection between Britain, Africa and the Caribbean became a clear triangle. Britain sent ships to Africa to pick up slaves from their colonies and take them to work on the plantations in the Caribbean, and then took sugar and rum back to Britain. This triangular trading route was called the triangular trade. By 1750, the most valuable commodity in the European trade was sugar, and it equaled approximately fifty percent of all European imports (BBC, 2019). To people, sugar where like drugs, and they did not care about the consequences that followed, and how slaves were treated. Maybe they did not know, or maybe they did not care, as long as it did not happen to them. There was no chance that they wanted to cut back on sugar, and they definitely did not want to lose wealth because of some foreign minority. “If we have no Negroes, we can have no sugar, tobacco, rum etc. Consequently, the public revenue, arising from the importation of plantation produce, will be wiped out. And hundreds of thousands of Britons making goods for the triangular trade will lose their jobs and go a begging” this is a quote from economist Malachi Postlethwaite from 1746 (BBC, 2019). He truly believed that the slave trade was vital for the British economy.The slave trade did not only generate money because of the labor the slaves did, but also because of their basic need and demands. Demands such as plantation utensils and clothing. Slave trade therefore stimulated Britainґs manufacturing and industry in more than one way. Joseph Inikori an African historian even suggested that it was the slave trade which allowed the Industrial Revolution to happen (BBC, BBC, 2019).

Already in the 16th century Britain had colonies in America and West. (2019, Aug 20). Retrieved from https://studymoose.com/already-in-the-16th-century-britain-had-colonies-in-america-and-west-essay 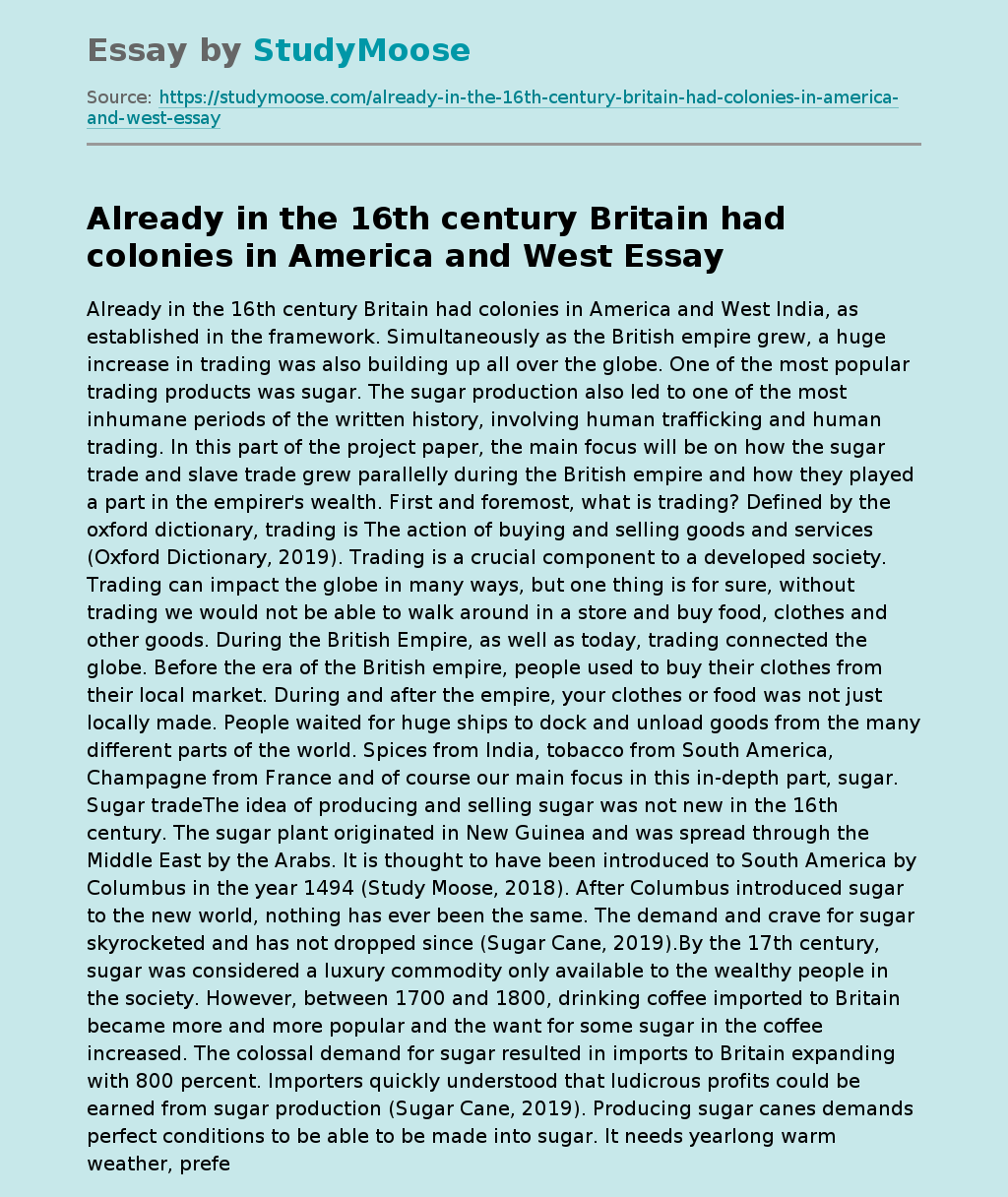