How Would You Define the Working Class in Nineteenth Century Britain?

Many historians have debated the definition of the term ‘working class’. It is argued that the term distinguishes social groups in society according to their lifestyles in which their beliefs, values and experiences are different to that of the higher classes. ‘The emergence of a mass society, in which classes stood out by their clothing, diet, modes of transport, living conditions, and leisure pursuits, was one important feature’1. However many historians agree that the emergence of the ‘working-class’ was different to that of the ‘traditional’ working class as their economic and social situations differed.

Don't use plagiarized sources. Get your custom essay on
“ How Would You Define the Working Class in Nineteenth Century Britain? ”
Get custom paper
NEW! smart matching with writer

Income to a large extent was believed to determine an individual’s lifestyle, this could become more important than class position in shaping attitudes. ‘One could therefore argue that the working class existed only at its most basic level of wage labour, which had little consequence for social relations, attitudes and conduct’2. This ’emergence’ of a new class is also greatly debated as each historian has their own opinion to when this ‘class’ was created.

However the time period for the creation of the lower classes remains between the eighteent and nineteenth century.

The concept of class also explains the social behaviour of the Victorian society, aristocratics and politicians used the term alongside ‘class consciousness’ to help explain the new attitudes and culture of the lower classes. In the early nineteenth century, the term ‘class’ became a well-known concept used to describe the actions of the different social groups in society. However this term also became very controversial as it caused political discontent as well as class conflicts due to incomes determining an individuals status.

Nineteenth century historians believe classes were formed by occupation in which the source of income divides the society in to different categories, however each historian and sociologist explored the concept in a different way. Eric Hobsbawm, The Making of the Working Class, argues how the working population was defined according to how much education they received and what qualifications they received out of the years they spent at school. This determined whether they would eventually become manual or non-manual workers.

Although many historians such as Edward Royle and Edward Thompson believed that the economic conditions of individuals created the different social classes. They also believed it shows evidence of class organisation and political struggles within the Victorian society. ‘New class had emerged struggling against new technologies and a changing way of life’3. The concept of ‘class’ is also considered to be evidence of class organisation in which individuals who accepted their position in society earned social stability.

The term ‘class’ became very controversial in the nineteenth century, as many social thinkers such as Karl Marx and Frederich Engels, believed the term related to both wealth and status. ‘They were not necessarily ideological in the ways that social class was from the 1830s’4. In the mid-nineteenth century, Marxists argued that the division of society had become increasingly defined as a result of capitalism. Marxists believed that the class struggle was caused by capitalism, as it is argued that the higher classes developed different opinions due to production becoming more fundamental.

Marxists argue that this helped form a vital structure in society. However the working classes were also identified through their surroundings in which they lived and by their style of life, this helped develop certain class-consciousness among the lower classes. The emergence of the working class is one of the most profound developments of the nineteenth century. By the 1920s members of the working classes began to express social relations in terms of class. ‘Class divisions were of great consequence’5. Modern historians argue that the new ‘working class’ was identified as a result of spending patterns amongst the lower classes.

The issue that defined a person’s class was whether they spent around 80% of their weekly income, especially if the income was spent on the necessities, which would get them through the week. There was also a great concern for the labouring classes to purchase items for display. This helped illustrate self-respect and showed that they were not confined to the poor. The new working class created a new attitude and culture in the vicorian society, the primary cause for this new culture was ‘the undermining of the distintiveness and cohesion of the old artisan culture in London’6.

In the 1830’s Britain became more urban, this helped attract more of the lower classes to work in domestic industry, as the workers were guaranteed a weekly wage. Working men’s wages in factories could vary from a low of 3 shillings to 6 shillings a week for agricultural workers or to a high of 50 shillings a week if they were highly skilled labourers. The working class spent the majority of their wages on the essentials, these included food, shelter and clothing.

The ‘factory system’ in the nineteenth century developed gradually with the upper classes taking control of the production lines in industry and taking advantage of water and steam power running the new machines. The development of the industrial economy in Britain had many different effects on the labouring classes of the Victorian society. There was an increase in the concentration of working class men working in the city; this is demonstrated through the number if inhabitants. In 1911 there were thirty-six cities of over 100,000 people compared to only 10,000 in 1851.

The increase in the working classes can also be shown through the rise in railwaymen from less than 100,000 in 1871 to 400,000 in 1911. The widening of the franchise and national economy helped develop the working class lifestyles and values. ‘The working class of the powerful and broad-based late Victorian economy was very different from the labouring classes of the period before the railway network had been built’7. However workmen found themselves dependent on the wages they received each week and found that they had no control over production in the factories, this created many objections in the new class.

Issues concerning the socio-economic conditons amongst the lower classes were presented through Trade Unions, industrial workers including men, women and children found that they had to work long hours in dangerous conditions. Some highly skilled workers also found they had to work as process labourers as machines took over the production lines. This was a direct response to industrialism. However Trade Unions and other pressure groups including co-ops and friendly societies were made illegal as a result of anxiety amongst the higher classes.

A new working class culture took hold, not on work but on leisure’8. In the Victorian period, most of the working class were forced to work for six days a week as there were very few restrictions on the amount of time the labouring classses had to work. This left little time for any leisure pursuits. However leisure provided an understanding between the classes. It helped determine self-control amongst the lower classes as well as ‘defining differing moral positions’9.

These activities were seen as senseless and uncontrollable. Many politicians and aristocrats believed this rowdy behaviour would threaten social stability in society. Traditional popular pleasures such as fairs were denounced as a result of being subjected to police control and regulations. Fairs were once known as a social event, which brought together towns and villages through different activities such as alcoholic indulgence. Traditional popular amusements also declined as a result of pressures over physical space and the commercialisation of agriculture.

In the nineteenth century working class culture developed due to leisure activities derived especially for the proletariat. It is argued among historians that this type of culture could be seen as being ‘traditional’. Charles Booth’s observation that the ‘strict rules of propriety’ in London demonstrates how a new attitude was created amongst the working class, as the rules did not follow the normal path concerning morality. ‘The working class carried no postive cultural connations, for they signified irreligion, intemperance, improvidence or immorality’10.

It is also argued that the working class lacked ‘civilisation’ as a result of residential segregation in society. These both helped introduce a new working class culture. This culture was most noticeable at the music hall as it offered a ‘fantasy escape from poverty and a solution to the class system’11. The music hall was visited predominantly by the working class, they were seen as ‘conservative in the sense that it accepted class divisions and the distribution of wealth as part of the natural order of things’12.

They became a reflection of the working class values and beliefs. The songs sung in the music hall emphasised themes relating to aristocracy, imperialism and the monarchy, these presented the new attitudes of the labouring classes. However music halls were also subject to constant disapproval from the higher classes as they were accused of being another form of public houses in which heavy drinking was common, as well as the halls being used by prostitutes to pick up clients.

The working class can be defined as a class which gradually established itself in the mid nineteenth century. This ‘class’ created a new culture in society, in which their way of life was enormously accentuated. Many historians have argued that this culture however did not become visible until the second half of the century and only became dominant in the 1890s. The lower classes in the Victorian society were subjected to residential segregation, this helped form class consciousness in the social classes as the different groups each had their own style of life and leisure.

The development of the British economy throughout the nineteenth century helped the working class become more involved in institutions derived for the lower classes, these included the co-op, the friendly societies and the local Trade Unions. These pressure groups helped the new culture to emerge as the working classes accepted their position in society and eventually began to defend their class ideals. However it is also argued that the new class was a result of ‘long suppressed yearnings, which had been latent in the old society’13 as most of the working classes had been looking for jobs not involved with agriculture.

How Would You Define the Working Class in Nineteenth Century Britain?. (2020, Jun 01). Retrieved from https://studymoose.com/define-working-class-nineteenth-century-britain-new-essay 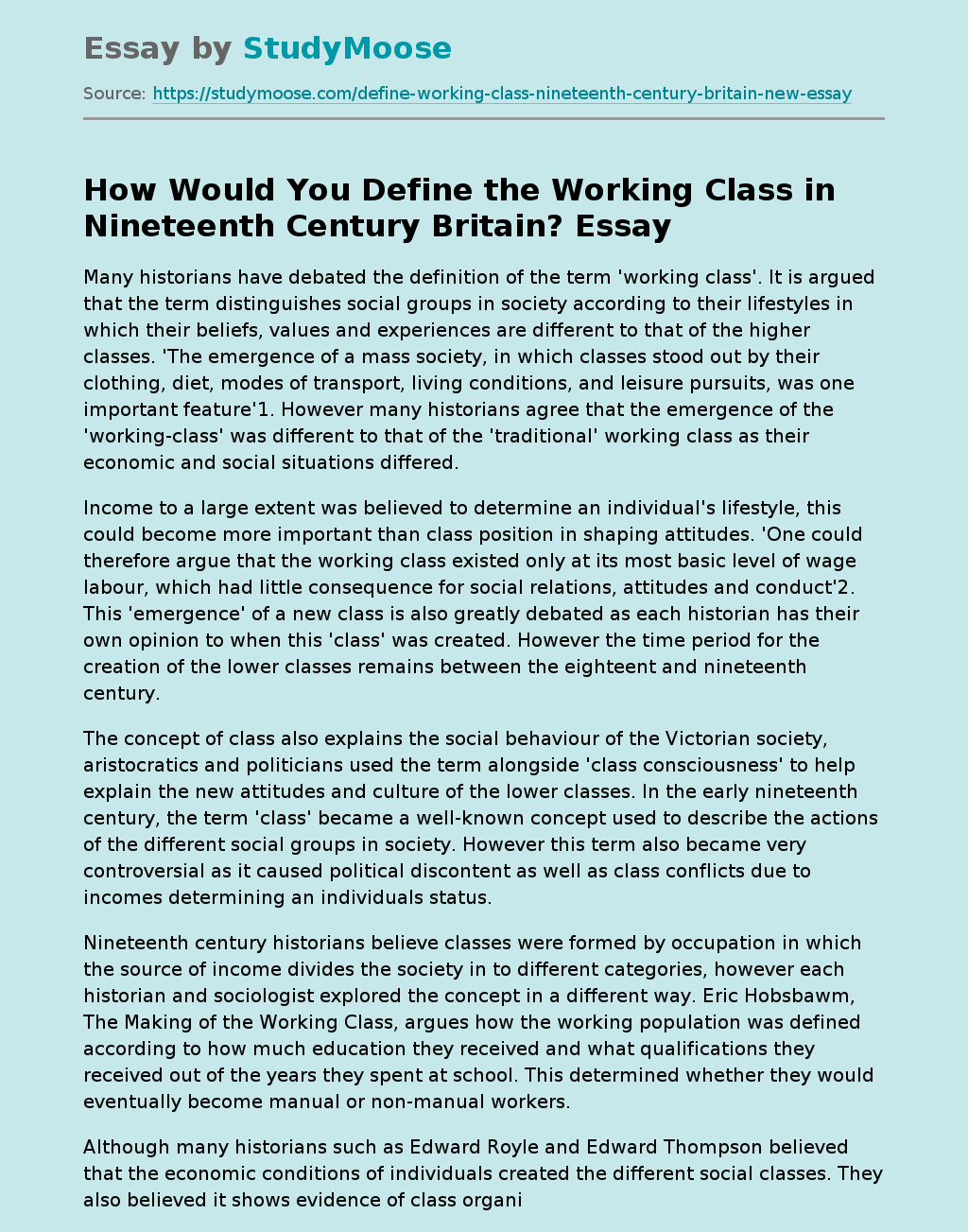