Major Schools of Thought in Psychology

Several researchers contributed to the development of psychology as a separate field of study. “Their work, along with Wundt’s work, made Germany the undisputed center of the movement” (Schultz, & Schultz, 2011p. 77). The world’s first psychological laboratory was opened by Wilhelm Wundt in 1879 at the University of Leipzig (Schultz &Schultz, 2011).

When researchers started to rely on controlled observations and experimentation to study the human mind psychology began to obtain its own identity separate from its philosophical roots (Schultz &Schultz, 2011). Scientific study was occurring in several psychological laboratories during this time and that is when the debate over how to describe and explain the human mind and behavior began. In this paper, I will be discussing some of psychologies history by identifying the major schools of thought. Each school of thought will have its strengths and weaknesses, and each one brings something different to our understanding of the human mind and behavior. The Five major schools of thought that will be addressed in this paper are structuralism, functionalism, behaviorism, gestalt, and psychoanalysis.

Furthermore, I will also give a description of how I imagine psychology to be in the future.

Major Schools of thought in Psychology

Structuralism was the first school of thought developed by Edward Bradford Titchener, who had studied under Wilhelm Wundt (Schultz & Schultz, 2011).

Functionalism was influenced by the work of William James and Charles Darwin’s theory of evolution (Schultz & Schultz, 2011). Williams James thought that we should emphasis on the functions rather than the structure of consciousness. That is why functionalism was interested in how the mind functions and how it is used by an organism to adapt to its environment (Schultz & Schultz, 2011).The functionalists believed that consciousness existed as a more continuous and changing process. One of main topics for study with functionalists was trying to understand individual differences, which had a major impact on education (Schultz & Schultz, 2011). Functionalism “influenced the educational system, especially with regards to John Dewey’s belief that children should learn at the level for which they are developmentally prepared” (Cherry, 2012). It was Darwin’s approach of adaptation and function and Galton’s measurement of individual differences that had a great deal of influence on psychology.

The behavioral approach is based on the concept of explaining behavior through observation (Schultz & Schultz, 2011). John B. Watson was the one responsible for the school of thought known as behaviorism. The only thing that should be measured scientifically and objectively is behavior therefore, internal thoughts or thinking should be explained through behavioral terms and if not we should do away with it completely (Cherry, 2012). The methods that behaviorists used were observation with or without instruments, testing methods, verbal report method, and conditioned reflex method (Schultz & Schultz, 2011).

The gestalt school of thought was considered an original, undistorted, natural approach to understanding a person’s thinking, acting, and feeling. The greatest value in the Gestalt approach, according to Perls, Hefferline and Goodman (1951, p.xi) “lies in the insight that the whole determines the parts, which contrasts with the previous assumption that the whole is merely the total sum of its elements”. “Wertheimer asserted that we perceive objects in the same way we perceive apparent motion, as unified wholes rather than clusters of individual sensations. The Gestalt principles are the basic rules that we use to make sense of or organize our perceptual world (Schultz & Schultz, 2011 p. 272). There are six principles proximity, continuity, similarity, closure, simplicity, and figure/ground (Schultz & Schultz, 2011).

The psychoanalytic view believes that there are inner forces outside of our awareness that are causing our behavior. Psychoanalysis main goal was to help clients release repressed feelings that might be from early experiences. Clients who showed signs of hidden disturbances could be cured by making conscious their unconscious thoughts. Freud’s psychoanalysis is both a theory and a therapy (Cherry, 2012). Furthermore, Freud believed that our behavior could be determined by our experiences as a child and the unconscious mind. He also believed that people have little free will to make choices in life. Freud suggested that there are three methods we could use to access the unconscious mind dream analysis, free association, and slips of the tongue (Cherry, 2012). There were three levels of personality according to Freud the id, ego, and superego. The id operates on the pleasure principle, the ego operates on the reality principle, and the superego represents morality (Schultz & Schultz, 2011).

Criticism of the Schools of Thought

The problem with structuralism was its method of introspection. The way they were using this method is what would be considered subjective and unreliable. They took their subjects and trained them how to respond to certain stimuli. However, no two people are going to have the exact same experiences or perceptions of something. In addition, they also were criticized because of the time that would sometimes elapse between the experience and the reporting of it this was known as retrospection. My opinion of functionalisms failures is that there really was none. The only criticism they really received was from Titchener and his followers. The main reason it was criticized was that it had no concern in maintaining psychology as a pure science (Schultz & Schultz, 2011).

Behaviorism was criticized because of its new methods and revisions. Psychology was already suggesting greater objectivity but not all psychologists were ready to accept the extreme objectivity that Watson proposed (Schultz & Schultz, 2011). On top of this some psychologist were not ready to except the idea that the only thing that should be measured scientifically and objectively is behavior (Schultz & Schultz, 2011).Gestalt theories of perception are criticized for being descriptive rather than explanatory. The behaviorists criticized gestalt because explaining learning in terms of meaning and organization is considered meaningless in the behavioral context (Schultz & Schultz, 2011).Psychoanalysis did not really have any failures in my opinion. There were others that criticized his work suggesting that he was sexiest and that his research lacked empirical data (Cherry, 2012).

Contributions of the Schools of Thought

I believe structuralism is the school of thought that acted as the creator for the rest of the schools. Structuralism played a significant role in shaping the field of psychology as an independent field of study (Schultz & Schultz, 2011). “The rapid development of applied psychology in the United States may be considered the most important legacy of the functionalist movement” (Schultz & Schultz, 2013). This led to the evolutionary theory, which studied the psychological adaptations of human’s through the changing of their physical and social environments along with the changes in the brain structure, cognitive mechanisms, and behavioral differences among individuals (Adaptation, n.d). Darwin changed the scientific study between humans and animals (Cherry, 2012). Without his theories, the field of psychology itself would have probably never evolved into what is today. In modern psychology there are researchers that study behavioral genomics were they consider how genes affect behavior this is known as biological psychology (Cherry, 2012).

Behaviorism has withstood the test of time maintaining its identity as a separate and unique school of thought (Schultz & Schultz, 2011).Conditioning is a concept used in behavioral psychology that creates a change in a behavior, and that change results in learning. Behaviorism, also known as behavioral psychology, is a theory of learning based upon the idea that all behaviors are determined by the environment through either association or reinforcement (Cherry, 2012).Gestalt psychology I believe influenced the humanistic approach. This is a psychological perspective that emphasizes the study of the whole person known as holism (Cherry, 2012). Psychoanalysis was originated by Freud in the 1890s and since then many others have extended the basic methods.

The most interesting fact about Freud is how his theory on psychoanalysis helps treat so many people with problems like stress, anxiety, and personality disorders (Cherry, 2012). There is also the fact that his system differed greatly in content and methodology from the traditional experimental psychology at the time (Schultz & Schultz, 2011). We all know that sometimes when people are introduced with something new it scares them. A lot of times people are scared of change or they do not like change but that is what I believe makes Freud’s work stand out the most. Even though he did not collect data from controlled experiments or use, statistics to analyze his results his work was still scientific. Through the acceptance and popularity of psychoanalysis, it is apparent that psychoanalysis has withstood the test of time (Schultz & Schultz, 2011).

Ten years from now, I would like to see a school of thought that emphases how much power the mind really has. Metacognition is where we think about thinking. It allows us to control our thoughts; it is where we regulate our knowledge and cognitive phenomena. For example, we here about churches performing miracles because they believe so strongly in the healing power of god that is a group of people using their mind power. When people commit crimes like robbing or drug dealing what is that society labels them as bad people right. Therefore, the mind is taking in thoughts about how others see them or label them as bad people.

If a child was to constantly hear that, he or she is worthless or never going to amount to anything or is stupid what does this usually cause; it makes them have a bad self-image or low self-esteem later in adolescent or young adult years. The proper way to help these individuals would then be to help them change their thought patterns. When a person makes their mind believe, so strongly about something it becomes reality for them. No matter what type of behaviors we display or actions will always refer back to the mind and the way we think. Almost everything a person does requires some form of thought or consciousness therefore; all the answers to our questions about human behavior can be traced back to the mind.

To conclude, that is why I believe that if all the schools of thought were to come together instead of trying to maintain an identity of their own we just might be able to answer a few more questions about the human mind and behavior. When great minds come together the power of the mind will prevail. The power of the mind could be the answer to all problems mental and behavioral.

Major Schools of Thought in Psychology. (2016, Aug 05). Retrieved from http://studymoose.com/major-schools-of-thought-in-psychology-essay 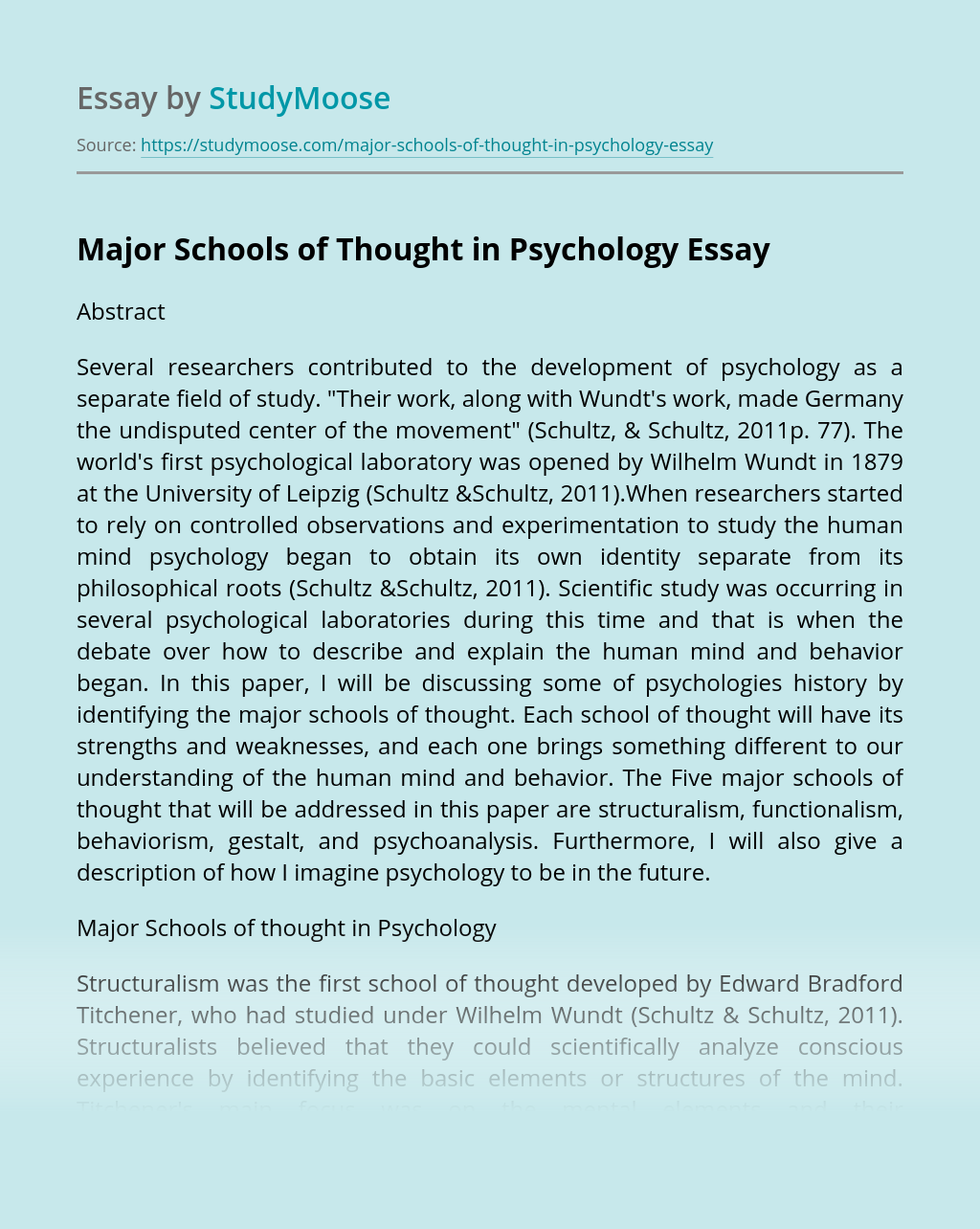 Don’t waste time
Get a verified expert to help you with Major Schools of Thought in Psychology
Hire verified expert
$35.80 for a 2-page paper
Stay Safe, Stay Original