We are all taught that our identity lies in the roles we play throughout life, in other words, in our actions. William Shakespeare wrote, “All the world’s a stage / And all the men and women merely players. / They have their exits and their entrances…” (As You Like It, II, vii). Whenever people act outside of their parts; whenever we miss our entrance, our identity is challenged. This can be seen everyday in all walks of life and in all arenas.

Don't use plagiarized sources. Get your custom essay on
“ Wife and Mother in Old Mother Savage ”
Get custom paper
NEW! smart matching with writer

Rigid, all-consuming, roles have been required of women since time remembered. Even in the twenty-first century, the career woman is still expected to maintain a family.

Gloria Steinhem puts it succinctly; “I have yet to hear a man ask for advice on how to combine marriage and a career.” Men are expected to place high priorities on their careers. The implication is that a man will receive less criticism for neglecting his family for his career, while a woman will be criticized sharply for having a career without also being an excellent wife and mother. Many of these identity feminine roles have been so inflexible that many women cannot break free in order to discovery the woman inside.

When circumstances force them out of their traditional roles, they find themselves wondering, “Who am I? What is my purpose?” Guy de Maupassant in his short story “Old Mother Savage” (1885) depicts a classic example of this. His main character is a mother in German occupied France who is deprived of her identity roles i.e. wife and mother. Since she has nothing else to give her life purpose, she becomes homicidal and a bit suicidal. In this story, Maupassant is arguing that women who have uncompromising and limited identity roles can become violent to themselves and others.

Maupassant paints a vivid picture of how nineteenth century countrywomen of France presented themselves to the world at large. The narrator’s friend, Serval, describes her as “not at all timid…tall and gaunt, neither given to joking nor to being joked with…the men folk come in for a little fun at the inn, but the women are always very staid” (p. 161). Victoire Simon, Old Mother Savage, is a kind, yet reclusive woman. She had once offered the Maupassant wine when he passed by her cottage fifteen years earlier tired and thirsty an obvious kindness (p. 160), yet Serval, Maupassant’s friend who tells the story of Old Mother Savage, implies that a “staid” attitude is normal for the women of the area.

Maupassant presents his readers with a woman who has been taught very specific actions for conduct. She dresses so that her “tightly bound…grey hair” is never seen in public. She was taught duty and “never learned how to stretch [her mouth] in laughter. By the time Maupassant’s readers meet Victoire, her identity is irrevocably tied to performing the duties of wife and mother. Just like all the other wives of the region, she is nothing without the duties of either wife and/or mother.

Victoire has her identity challenged thrice. The first challenge occurres many years before when “[t]he father, an old poacher, had been shot by gendarmes [police]” (p. 160). This provides a serious blow to her wife identity but she buries the lose because after all half her identity is still intact–she is still a mother. The role of mother is more prevalent than that of wife since, she cannot control the actions and their consequences of her husband. He, to some extent, failed in his role of husband and father by getting caught at poaching and subsequently shot for the offense. Victoire, on the other hand, is still around to perform all the motherly duties of keeping a home, cooking meals, and mending clothes, which she does religiously.

The second challenge to her identity comes when war is declared and her son, now thirty-three, goes to fight in the Franco- Prussian War. Victoire is alone. She knows her duty but has no one to perform it for save for herself. Her life consists of “go[ing] to the village once a week, to buy herself bread and a little meat; then get back home at once” (p. 161). She does only what is necessary to keep herself alive until she can resume her duty as mother. In her mind there is nothing else for her–no gossiping with the village ladies; no sewing a new garment for herself; no cups of tea with a neighbor. Her world ceases to function without her duty to her son.

The death stroke to her identity began with the arrival of the Prussians. She is required to billet four of the occupying German soldiers, since she was “known to be well off” (p. 161). These young men, about the same age as her son “would clean up the kitchen, scrub the flagstones, chop wood, peel potatoes, wash the house-linen–do, in fact, all the housework, as four good sons might do for their mother” (p. 161). She would cook and mend for them, as a good mother would do. She still had a purpose–to be a mother even if it was to surrogate sons. For a month these soldiers are sons not enemies then she receives word that her son has been killed in the war. Suddenly, her world is shattered without her son she has lost her last shred of purpose. “The gendarmes had killed the father, the Prussians had killed the son…and suffering flooded her heart” (p. 162). With her husband buried for years, her son dead; she has no identity and consequently no purpose in life. Within moments, she plans a special form of revenge–not only will others suffer as she has, not only will someone die for to avenge her son, but she will be sure to die in consequence of her actions.

Suddenly, the four German sons become four German soldiers–the enemy. “Simple folk don’t go in for the luxuries of patriotic hatred…the poor and lowly…pay the heaviest price…their masses are killed off wholesale…” (p. 162). Ones like these German soldiers billeting in her home murdered her boy. It is quite possible that she would have assumed a German mother was caring for her son like she was caring for the German men. She is, after all, a “simple folk”, who would not have much knowledge of the intricacies of war beyond the billeting of the German soldiers. Therefore, not only did German soldiers kill her son, but also a German mother failed in her duty toward her son. Through a carefully executed plan conceived in the brief afternoon of discovering the fate of her son, Victoire kills the soldiers. She burns her cottage to the ground with the soldiers trapped inside. When the German Officer asks her how the fire started, she said, “‘I lighted it, myself.’ She took…two papers from her pocket.

‘That’s about Victor’s [her son] death.’ ‘That’s their names, so that you can write to their homes.’ ‘Tell them [the German mothers] how it happened, and tell them it was I who did it, Victoire Simon, that they call the Savage. Don’t forget.'” In order to ease her grief, she wanted other mothers to suffer as much as she was suffering. She knew she would be shot for her actions; she was probably counting on it. She could easily have lied. She could have told the German Officer just about any excuse, but she didn’t. What did she have to live for? She had no purpose for living without her husband and son. Her society, by placing limited and ridged identity roles on its women, robbed her of the ability to discover an identity within herself separate from family. Therefore, she did the only thing she could do–take revenge on the closest target and be sure she did not survive the experience.

Maupassant, in five short pages, presents a compelling argument for the avoidance of limiting women with restrictive identity roles. Disastrous consequences are all too likely to result from their removal. Consequences that go beyond the death of four soldiers and their murder, the narrator’s friend Serval had his chateau burned down by the Prussians due to Victoire’s actions. If her identity had been broader–if she knew herself outside of societal-imposed roles, she then may have had something to cling to–a purpose in life rather than a kamikaze plan of revenge. 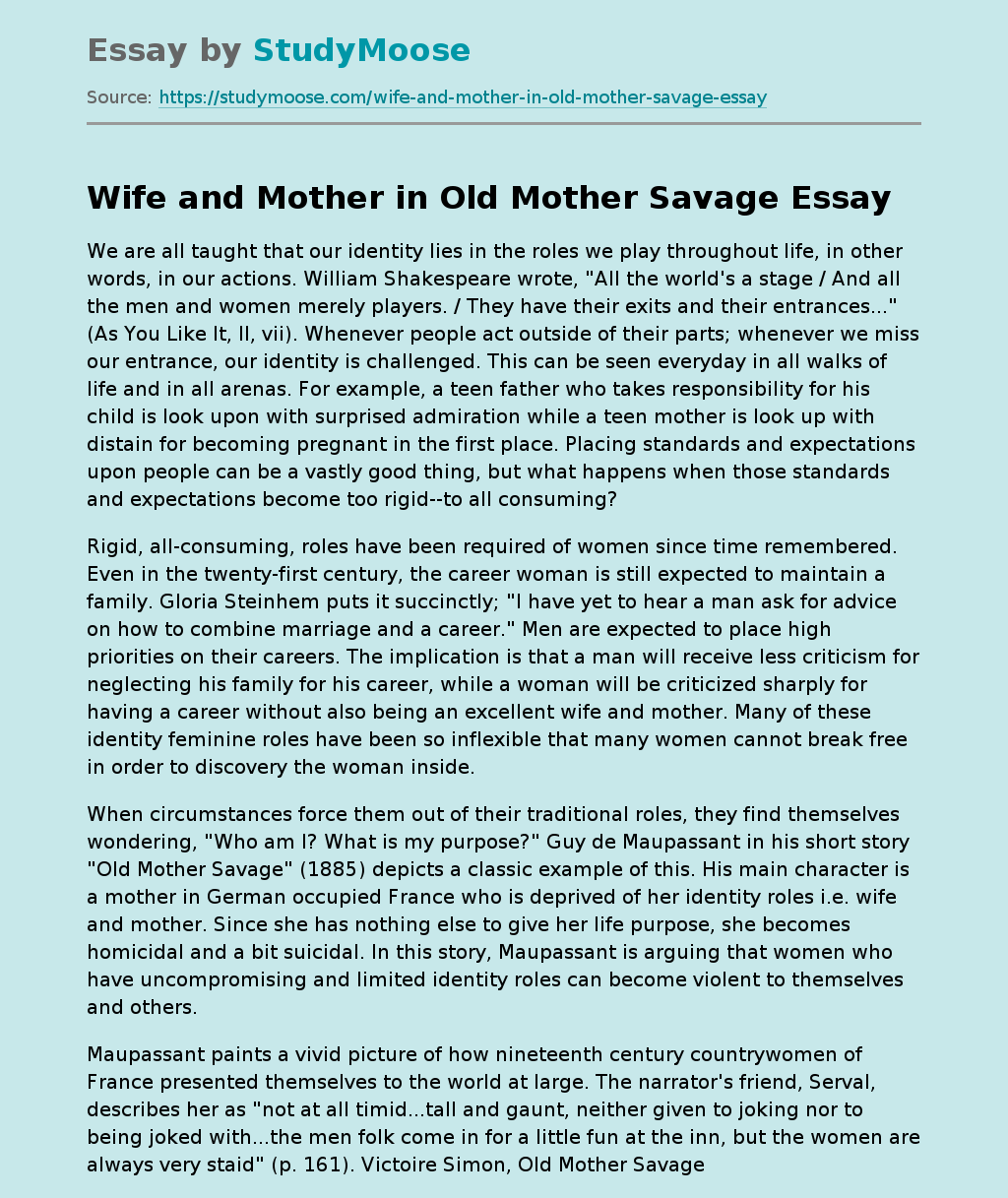