What does it mean to be human?

What deems an individual as being “human”? It could range from the relations a person has with others, to contributions an individual has dispensed to a certain field. The most imperative note to be taken when wondering what proclaims a person to being human is that every individual’s definition of a “human” is different. While lives are lived, people are constantly growing and changing. Some might find purpose in life just by focusing on helping themselves; creating the best “me” they can be.

Don't use plagiarized sources. Get your custom essay on
“ What does it mean to be human? ”
Get custom paper
NEW! smart matching with writer

While some might find their purpose through helping others, putting their focus on their external environment, rather than their internal. In Treatise on Laws, Book 1 translated by Francis Barham, Treatise on Sacred Doctrine written by Thomas Aquinas, and The Meditations by Marcus Aurelius are where these examples are displayed. The excerpts from Treatise on Laws, Book 1 that was translated by Francis Barham display many opinions regarding the Nature of Law. In order to figure out how an individual is human, men and women need to follow the standards of the nature of law.

“We will discuss the true objects of thought and action, for which we were born and sent into the world, and the beautiful association and fellowship which bind men together by reciprocal charities: when we have fathomed these grand and universal principles of morals, we shall discover the true fountain of laws and rights.”1 In order to be human, the individual needs to be aware of the set of laws and with these laws the person will either do the right or wrong thing.

see more:to be human is to err

If the wrong action is committed against the set of laws, then there will be consequences. Humans are a unique species of men, women, and children, with a superior mental development. There are several diverse characteristics displayed in individuals determining what it means for them to be human. “They therefore conceive that the voice of conscience is a law, that moral prudence is a law, whose operation is to urge us to good actions, and restrain us from evil ones.”2 To be human, mistakes will be made, trust will be lost, and forgiveness will be found. If an individual decides to perform an evil task, they can hopefully have the opportunity to learn from their mistakes. Then, it could cause them to begin performing deeds of a better nature. Being human does not mean that flawlessness is the greatest; imperfections make up a true individual. If the individual is able to learn and grow from his or her experience, then any mistake can be deemed worth wile. “Whatever definition we give of man, it must include the whole human race. And this is a good argument, that no portion of mankind can be heterogeneous or dissimilar from the rest; because, if this were the case, one definition could not include all men.”3 This quote states that all individual men are still a part of the human race. By definition we cannot be separated out as individuals. This quote is false because each and every human being is unique in their own way.

There is not just one definition of what a human is, because people are constantly changing. Men and women were all created equally, however this equality does not mean that each human is composed of the same identity. Thomas Aquinas who wrote Treatise on Sacred Doctrine, talks a lot about the conscience of man. The question is whether conscience should be considered a power or not. ‘”Conscience is a correcting and guiding spirit accompanying the soul, by which it is led away from evil and made to cling to good.”’4 People make decisions everyday, regretting their actions and wishing their conscience overpowered their evil doing. Everyone makes mistakes, but with mistakes, comes forgiveness. If man never made mistakes, then the world would never change. The world would constantly be repeating the same things over and over again. Individuals learn to forgive and forget, which is a necessity in order to be human. Those are just two of the several natural occurrences that are unavoidable to humans throughout their lives. “Conscience is a subject of sin; for it is said of some that “their mind and conscience are defiled.”’5

One of the aspects of being human involves putting others ahead of you. Individuals need to be conscious of themselves and others that surround them. In order for proper function inside of a civilization, each individual needs to look out for one another. If there is a lack of a natural want to care for one another, it can and most likely will result in the demise of the civilization. Without a conscience the world wouldn’t know the difference between good and bad, which would end up causing several complications. “The mind and the understanding of man is of the very essence of the soul…”6 An example of the mind and understanding man is found in the religion, Buddhism. Buddhism revolves around the human soul. When a Buddhist finally reaches Nirvana that means that they released all the desires of the human mind and ended their suffering. In Buddhist culture, finally understanding oneself and ones desires allows the desires to be abandoned and end the suffering of man, therefore setting the soul free. In Marcus Aurelius’ writings of The Meditations, he focuses on how human beings should live, their responsibility on earth, avoidance of pleasure, purpose, and courage of death. These characteristics describe the qualities of being human in the ancient Roman time period.

“Men despise one another and flatter one another; and men wish to raise themselves above one another, and crouch before one another.” 7 In order to be human you need to have emotions. Emotions of envy, anger, fear, grief, and joy are only some of the emotions that each individual has. This quote displays the emotion of envy. Man is envious of other men in various ways. In order for the natural world to take its course, men need to be jealous. This is because jealousy can create a sense of competition that makes them strive and persevere. Along with envy man is sympathetic and sociable. “The first thing which philosophy undertakes to give is fellow-feeling with all men; in other words, sympathy and sociability.”8 In order to be human, the feelings of compassion have to be felt towards others. Without compassion humanity cannot survive because there will be no love. Without love, man simply exists, not living in reality. In today’s society one thinks that the increased technology escalates the social aspect of human lives, but that is incorrect. With more technology, it is harder to communicate face-to-face, merely easier to socialize through phones, computers, and social media. This is impacting the lives of almost of humans, and this quality of being social is a necessity in order to be human.

Mankind can only do well for society, but such factors such as ignorance and self-doubt can result in outlandish behaviors. “Accordingly men are pained when they are called unjust, ungrateful, and greedy, and in a word wrong-doers to their neighbours.”9 This quotation represents the world, humans specifically, and conveys the timeless message that mankind has been created and taught to only produce good. However, when fowl and unjust actions occur and mankind is producing, in a sense, evil, it is blamed on the effects of the internality of that being. This quote also shows how being human means having to deal with our own emotions and how our emotions can have such a toll on ourselves that it results in the wrong type of behavior. Humans in society are more focused on the status of themselves, rather than the general well being of the public, including their neighbors.

Represented through all forms of media, most of the time the news, we see how detrimental one mans actions can be. “If men do rightly what they do, we ought not to be displeased; but if they do not right, it is plain that they do so involuntarily and in ignorance.”10 It is because of that one man and his actions that cause society to question the whole world. And it is because of that one man that one action, that society questions the whole world. This quotation labels “wrong doers” of society for exactly what they are and what they are doing; wrong. It represents humans as people of both good and evil, as beings of free will and others of not. Overall, this quotation is pointing out how humans have contributed more wrong to society, rather than good. This is a refutation to the previous quotation, where it represented human beings of mostly good intentions. Ultimately, it is apparent from these works that being human does not mean that we are simple.

Made up of diverse complexities and alterations from one another, we are faced with barriers and challenges everyday. Both within our selves and outside ourselves with our fellow humans, we make up a world of two types of battles occurring internally and externally. In the works Treatise on Sacred Doctrine written by Thomas Aquinas, Treatise on Laws, Book 1 translated by Francis Barham, and The Meditations by Marcus Aurelius, different answers to the question of what it means to be “human” are displayed. As time progresses and more equality is found and better treatment of our neighbors is transpiring, the world will become more civilized. It is an endless battle, being human that is, but it’s a battle that holds within so much beauty, love, hatred, jealousy and more. But, fortunately, being human means every different individual has at least one thing in common; we’re human.

What does it mean to be human?. (2016, Jun 04). Retrieved from https://studymoose.com/what-does-it-mean-to-be-human-essay 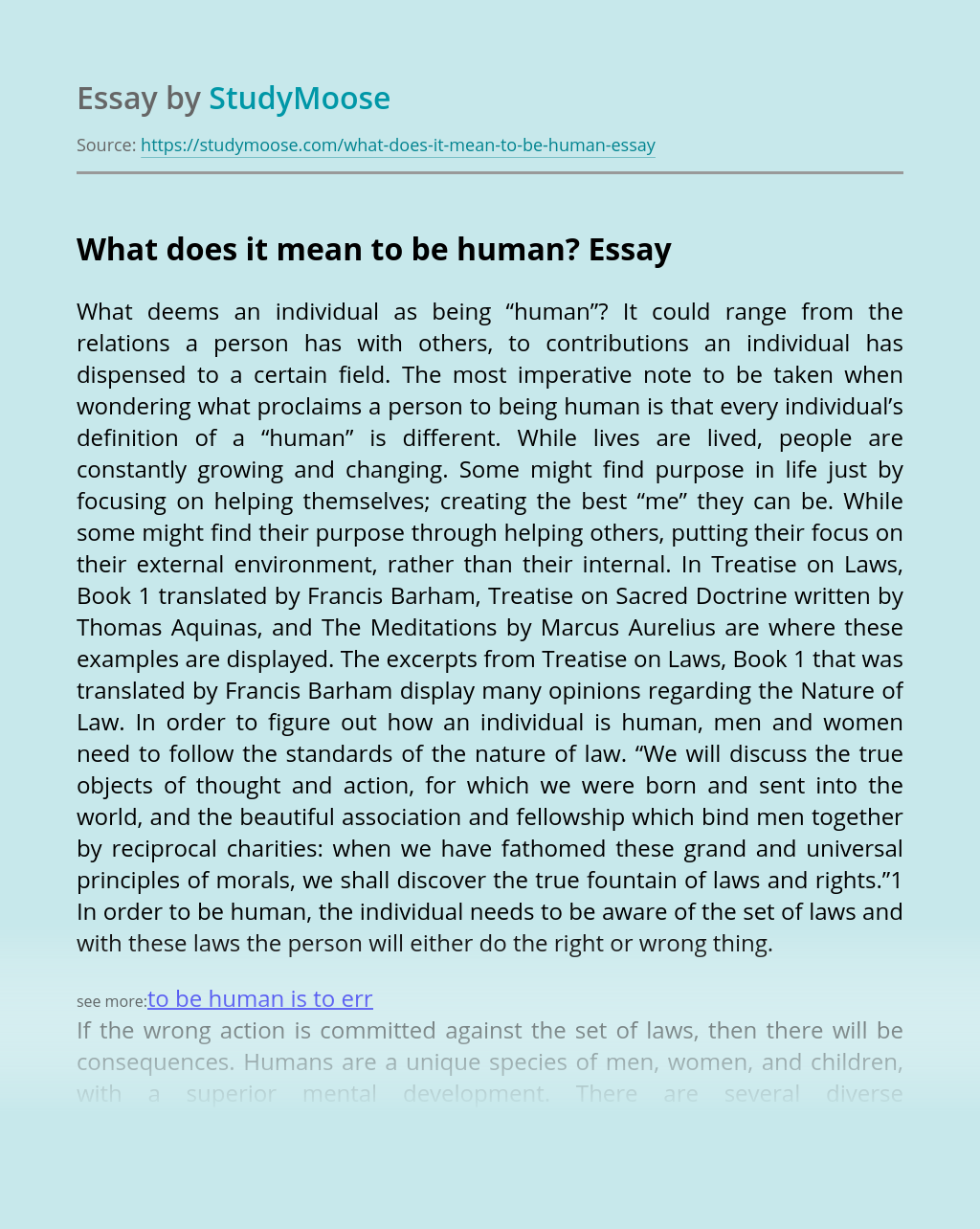