What does it mean to "think sociologically"?

A key part of engaging in sociology is to adopt a sociological viewpoint or ‘think sociologically’. Etymologically, sociology is the ‘study of society’ but this doesn’t differentiate sociology from other forms of social study. Hence, many begin to describe thinking sociologically by what it is not – it is not thinking politically, thinking anthropologically, thinking historically or thinking psychologically, for example (Berger 1966: 11-36; Reiss 1968: 2-3). Others try to determine the nature of sociological thinking by detailing practical phenomena which can be thought about such as social systems and their subsystems, social institutions and social structure, and social aggregates, relationships, groups and organisations (Reiss 1968: 1), or by key mental tools that people who call themselves ‘sociologists’ use while thinking, such as continuity, change, action or form (Krauss 1980: 12-19).

Don't use plagiarized sources. Get your custom essay on
“ What does it mean to “think sociologically”? ”
Get custom paper
NEW! smart matching with writer

Focussing on the concept of ‘thinking sociologically’ provides a convenient way to grasp the field of sociology. The perspective outlined by C. Wright Mills in his The Sociological Imagination is widely recognised as a set of key tools in understanding social phenomena which Willis (1999) expands on. Willis uses Mills to argue that there are four distinct sensitivities that must be used when thinking sociologically – the historical, the cultural, the structural and the critical.

The historical sensitivity is essential as sociology is focused upon the mechanisms of change and the discipline’s scope extends to societies of the past and future.

Max Weber’s work in explaining the nature of authority both in our own and other societies would have been difficult without a sensitivity to history and provides a good example. The cultural sensitivity is fundamental as culture sits at the core of the links between individuals and groups – culture helps to explain the distinctive nature of different groups and societies, and encourages the sociologist to consider the whole rather than the parts. Emile Durkheim’s consideration of the nature of cultural solidarity provides an example of this sympathy. The concept of structure encourages sociologists to focus upon relationships and social connections.

Marx’s partial explanation for the revolutionary change in his society through the clash between classes is an example of a structural angle on a sociological problem. And a critical sensitivity, as Mills emphasises, is at the core of the sociological enterprise – to think sociologically is to challenge and test the common sense assumptions about others that surround our daily lives. Critique for Mills was at the core of the sociological imagination on every scale, so I will illustrate this with an example drawn from my own school days. Of course, I am exaggerating each of these examples to draw out a particular aspect of the thinking behind them – each features all four of the sensitivities otherwise they wouldn’t be examples of sociological thought.

The first sensitivity central to thinking sociologically is a sensitivity to the historical. History has a tremendous effect upon individuals and societies so a historical awareness is essential. Historians disagree on a precise definition of thinking historically, but generally agree that human thought and action must be understood in context (Willis 1999: 60). Anachronism is to be avoided and societies of the past have their own ways of thinking and values – we must understand the past in its own terms (Prevenier and Howell 2001: 10). The sociological use of history is generally different to its use by historians – sociologists use history to grasp and potentially change what is happening around them in the present whereas historians often record the past or look for meaning in it (Willis 1999: 62). A historical sensibility also prepares sociologists to grasp the new.

The work of Max Weber (1864-1920) provides a good example of thinking sociologically with a sensitivity to history. Weber, amongst a wide variety of interests (Beilhartz 1992b: 225) was concerned with the changing nature of authority in the western Europe of his time. By examining other societies, and more particularly, by looking at the nature of authority in the pre-modern West, Weber was able to describe authority as increasingly resting upon a “legal-rational” basis – where rulership is based on formal rules possessing legal backing.

This stood in contrast to earlier authority systems which relied either on traditional (such as monarchs relying on familial links) or charismatic (based on extraordinary personal characteristics of the individual leader) emphases (Beilhartz 1992b: 226, Willis 1999: 5). At another level, theories such as these help to explain to why people do as their boss asks even when they don’t understand why they’re directed a particular way. Another example of the historical awareness within sociology is the present focus upon the concept of post-modernity, which by its very title proclaims its embeddedness in time.

A second understanding that is fundamental to thinking sociologically is a sensitivity to culture. Culture is the shared knowledge and schemes created by a set of people for perceiving, interpreting, expressing, and responding to the social realities around them (Lederach 1995: 9). A sensitivity to culture allows sociologists to be conscious of the links between the natural and social worlds (and hence to avoid assumptions of ‘naturalness’), to develop an awareness of the variedness in the world, and to examine different societies on an equal basis therefore avoiding ethnocentrism.

The sociological use of culture is sometimes but not all that different to that of anthropologists (Willis 1999: 47), although anthropologists are perhaps more likely to examine cultural artefacts and make comparisons across cultures. A cultural attentiveness also encourages sociologists to consider issues on scales large and small, from the behaviour of individuals within elevators (Levins 1996: 43-4) to explanations for society-wide conflict (Johnson 2000).

The work of Emile Durkheim (1858-1917) and his followers provide a good example of the sensitivity to culture informing sociological thinking. Like Weber, Durkheim wondered at the ‘collapse of social order’ that marked the division between pre-modern and modern societies, but he had an answer that relied on the shared assumptions and lifestyles, or culture, of the society (Langer 1992: 70). Durkheim was a key sociological thinker who argued that society was not just the sum of individuals and that “the system formed by their association represents a specific reality which has its own characteristics” (Lukes 1975: 211).

A sensitivity to structure is a third aspect central to thinking sociologically. The concept of structure is difficult to define at any depth (Sewell 1992), but it can be understood as the ordered interrelationships between different elements of a social system or society. The structural perspective helps us to think sociologically by encouraging us to recognise patterns, consider links and attempt to examine the whole (Lachmann 1991: 281; Willis 1999: 82-4). A structural awareness moves sociological thinking away from focussing upon individual explanations – it promotes an examination of context. However, structuralism can go too far and generate a causal determinism in which the efficacy of human agency is lost – this makes it difficult to account for change (Marshall 1994: 517-8). Nonetheless, the structural sympathy gives sociological thinking an essential detachment (Krause 1980: 161) and scepticism of explanations based on irrationality.

The work of Karl Marx (1818-1883) provides us with an example of sociological thinking with a sensitivity to structure. Marx saw society as changing via the rise of awareness within classes (Lackmann 1991: 132). Classes based on economic divisions are the structural units of society, and the oppression of one class by another, and the resulting alienation is central to an understanding of the society. Marx’s awareness of structure gives him a tool for understanding history and culture, and for forming the basis of his critique of society. Another example of the use of class and structure is in the examination of inequality in Australia (Bessant and Watts 2002: 286).

A final aspect of sociological thinking is Mills’ return of criticism to the centre of sociology which makes his work attractive to many sociologists (Willis 1999). To think sociologically is to maintain a health scepticism and unnacceptance of what’s happening in the world. It is a driving force that separates sociology from many other disciplines, making it an ‘active’ rather than passive discipline. Critical thought also involves comparison and analysis of competing explanations. It is important to recognise that to have a critical sensitivity is not to blindly disagree with the way things are. But to think sociologically, you must begin by looking at the world with a curiosity and a questioning eye.

Mills saw most of his sociological work as critical and encouraged everyone to recognise and engage in consideration and critique of social norms and ‘common sense’ (Mills in Lemert 1998: 348-52). I remember myself what could have been my first instance of thinking sociologically. When I first went to school the teachers got the boys and girls to line up in separate lines when moving between classrooms. I remember thinking this was very odd – why was it necessary to separate the groups? Why not just have one line, or three lines? While I didn’t grasp the reasons why until later in my life (where I recognised that that particular school sought to emphasise discipline, if not certain sex roles), this questioning of a social phenomena was a moment of sociological thinking.

To conclude, thinking sociologically means thinking in a way that combines an historical, cultural, structural and critical perspective when examining the relationships between societies and individuals. It is this style of thought which brings together key sociologists such as Weber, Durkenheim and Marx, as well as the everyday thoughts of young children and people everywhere when they look at the people around them and think about why relationships between people and groups are the way they are.

What does it mean to "think sociologically"?. (2016, Jun 21). Retrieved from https://studymoose.com/what-does-it-mean-to-think-sociologically-essay 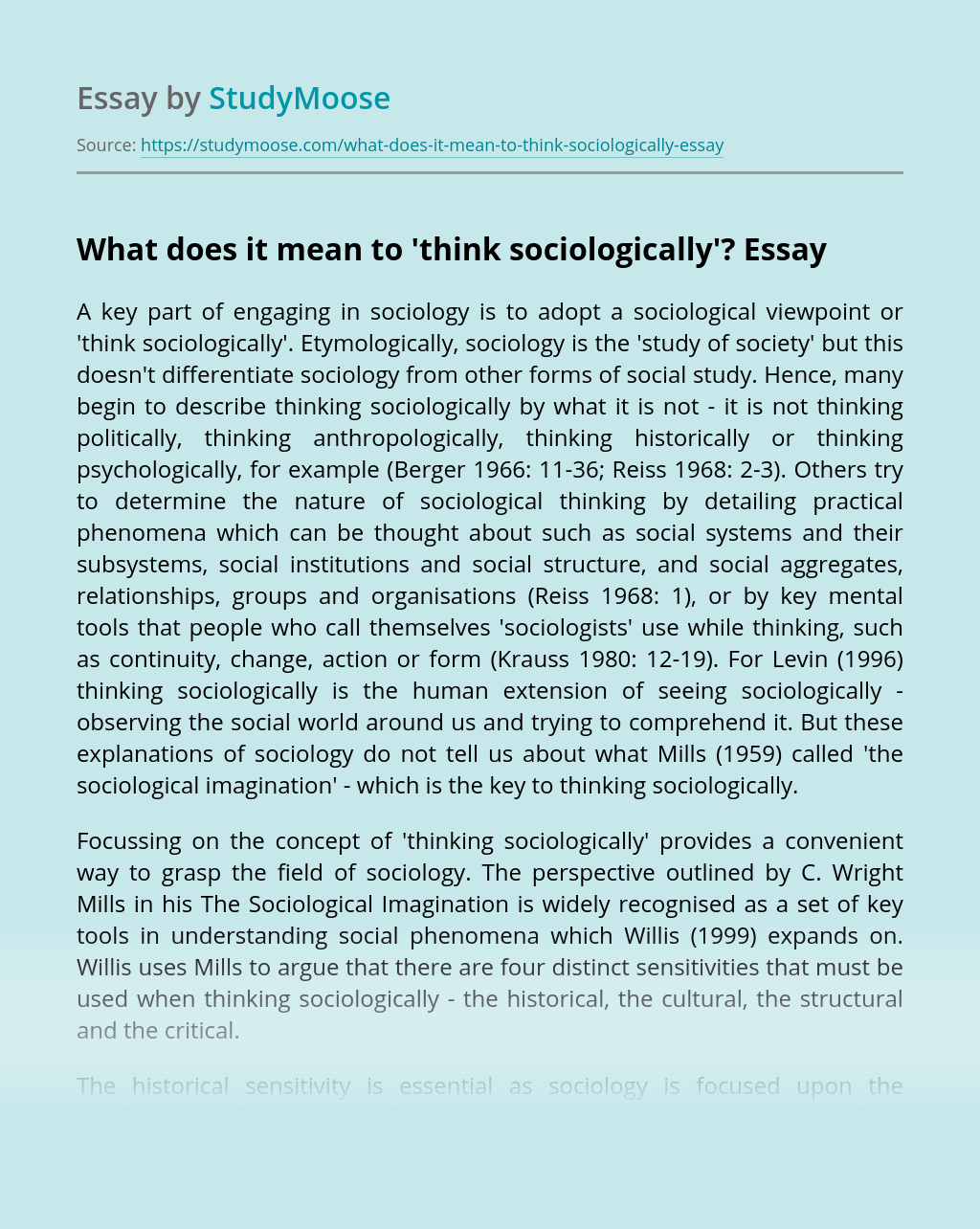