What does it mean to be famous?

1. According to Daum, What does it mean to be famous?

According to Daum being famous means being unskilled, untalented, and annoying.

2. How does Daum define a celebrity?

Daum defines a celebrity as someone who is easily recognized in the street and who has made an effort to become well known through his or her work and talent.

3. What does Daum mean in paragraph 7 when she says, “it’s pretty clear that it’s never been a worse time to be famous”?

I think Daum feels that being a celebrity now days aren’t as valuable as it used to be.

Don't use plagiarized sources. Get your custom essay on
“ What does it mean to be famous? ”
Get custom paper
NEW! smart matching with writer

It’s not about talent anymore, and there is a lot of competition.

4. How does Daum see today’s celebrities as different from those of years ago?

Does she see things as positive or negative? In my opinion I think that Daum sees todays celebrities in a negative light. Back then celebrities had to be talented and make a huge effort.

Proficient in: Being On Time

Now days it seems like anyone can become famous regardless if they have talent. I believe Daum sees all new celebrities as untalented people.

5. What do you think Daum means in paragraph 6 by “tabloid-targeted exploits”?

Can you give examples of such exploits? In my opinion, celebrities such as Paris Hilton, Snooki, and Kim Kardashian have become famous because of a “tabloid-targeted exploit”. What I think Daum intended by that phrase tabloid-targeted exploit is amateur, inexperienced people that are famous because of the audience that are making them famous by watching their shows, purchasing their magazines, clothing line, and following them on social media.

6. In paragraph 9, Daum says, “Fame is no longer about reaching the masses but about finding a niche somewhere.” Give some examples of what a “niche audience” might be.

8. According to Daum, what is the difference between “actual fame” and “fame-iness”? Daum suggest that actual fame is obtained by having talent and working hard whereas fame-iness is acquired by possibly having no talent but having an audience that has the same interest as one such as Nash Grier who became famous by his Vine Videos. Some watch his videos not because he is talented but because they find him funny and/or attractive.

1. This essay discusses fame and celebrities in general terms but gives very few examples. What example does Daum provide? Why do you think she doesn’t include more? Daum named celebrities such as Bill Clinton, Meryl Streep, and Sting. I think the reason why Daum didn’t name more celebrities is because she wanted the reader to stop and think of celebrities that would come across their mind when reading the essay. 2. What is Daum’s attitude toward her audience? How do you know? Does paragraph 5 offer any information that might help answer this question? I believe Daum is trying to sympathize with her audience by speaking directly to the reader. I do think that paragraph 5 helps answer this question because she is speaking to the audience when she said, “ I know what you are thinking”.

What does it mean to be famous?. (2016, Sep 24). Retrieved from https://studymoose.com/what-does-it-mean-to-be-famous-essay 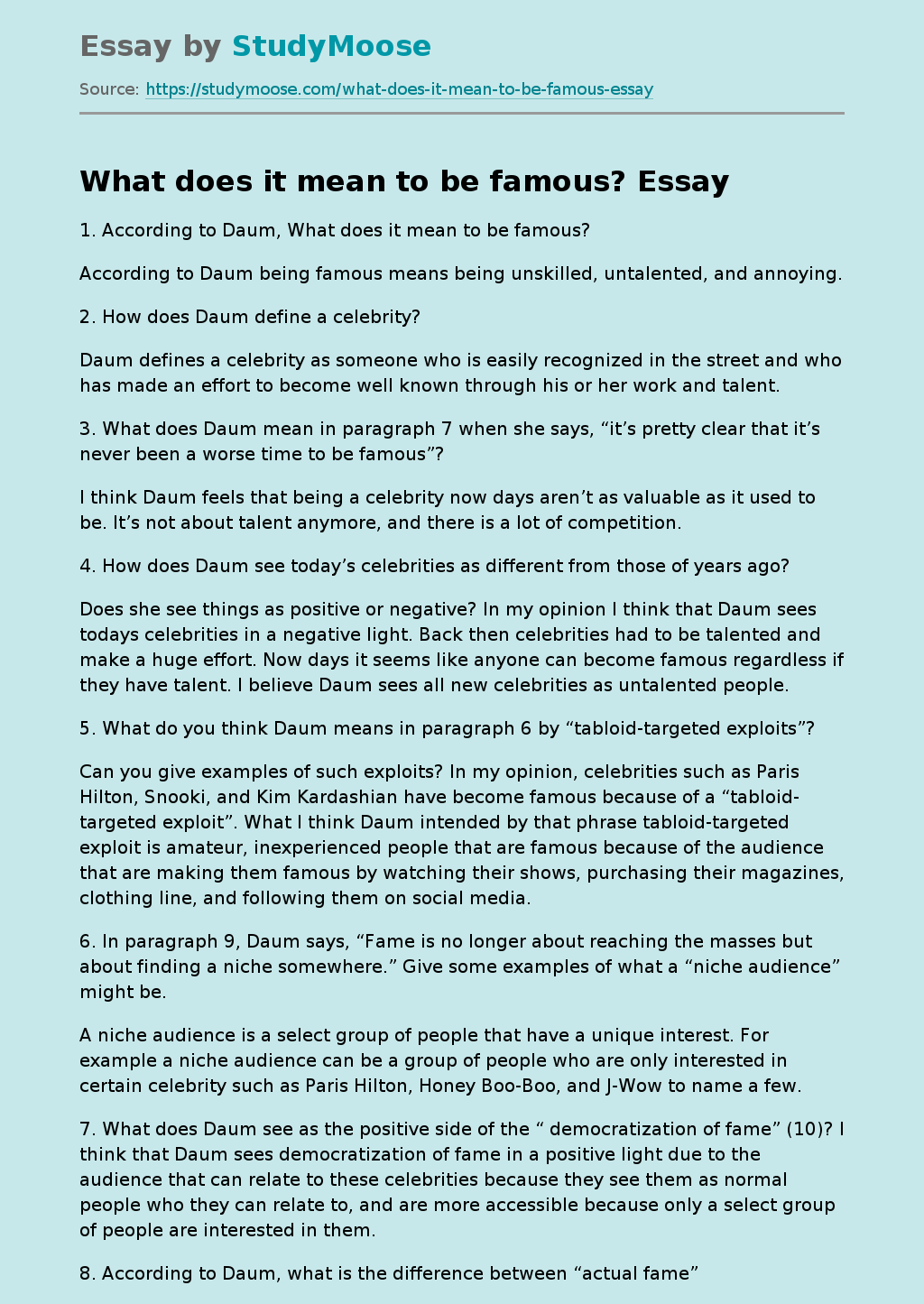