Despite the fact the founding fathers advised contrary to the establishment of political factions as the Constitution withstood the ratification process, a rift amongst men in President George Washington’s cabinet instituted the move toward the conception of political party. During the time period between 1791 and 1833, a two-party system had begun that demonstrated the philosophy of the Federalists and Democratic-Republicans. Although these two political groups were unyielding in their original ideas and beliefs, both had to change a few of their initial standpoints on numerous topics as they dealt with the truth of the government.

Don't use plagiarized sources.
Get Your Custom Essay on Two Party System DBQ Just from $13,9/Page

America’s first president, George Washington, assembled some of the finest political thinkers of the era in his group of advisers, often referred to as the presidential cabinet. Two members of the cabinet, Alexander Hamilton, Secretary of the Treasury, and Thomas Jefferson, Secretary of State, shortly found themselves competing with each other on many aspects of the Washington administration. The first disagreement developed when Hamilton sought a Bank of the United States be created to establish order to the American economy and trade, using the “elastic clause” of the Constitution to rationalize his request (Doc.

1). Thomas Jefferson disputed against the Bank since it was not approved by the Constitution, in consequence illegal and a violation of states’ rights (Doc. 2).

Following this controversy derived two meanings of the Constitution. One being Hamilton’s loose construction, where if the Constitution does not refuse something, it then becomes allowed. Secondly, Jefferson’s strict construction, where if the Constitution doesn’t clearly address a group, it cannot be present. These ideologies became the source of the first two political parties, along with the philosophy about whether the federal or state government should have the greater control. Hamilton was joined by Vice President John Quincy Adams leading the Federalists, who acknowledged a strong central government. Jefferson was joined by James Madison leading the Democrat-Republicans, who believed power was in the hands of the states.

On the other hand, as the country advanced and refined, it became known that the fixed views of the two political parties needed to be reasonable if the nation were to expand. Jefferson made the first action toward reconciliation and moderation of his political outlook with the Federalists by contributing a sense of peace in his First Inaugural Address (Doc. 3). Jefferson declared, “We are all Republicans, we are all Federalists,” signifying Americans are all in this society together and collectively make the world outstanding. Jefferson and his party had to further control their thinking when the chance to purchase the Louisiana Territory from France appeared in 1803 (Doc. 4). There was a lack of preparation in the Constitution for a president to buy more territory. However, the opportunity may have not continued to be accessible for a long amount of time, and Jefferson changed his own “strict construction” aspects and doubled the size of the United States.

In opposition to its preference, the United States became engaged in European affairs as the Napoleonic War was fought, interrupting with American shipping and trade. At last, the Untied States went to war with Great Britain to protect its right to “freedom of the seas.” Federalists, who were now out of power in the executive branch and a minority in the law-based branch, began to protest America’s involvement. They created a set of orders in Hartford, Connecticut, which would have given more power to the outnumbered party, something they were against in the 1790s (Doc. 5). So, by the final opinion of the War of 1812, both political parties had regulated their core beliefs to the point that their belief systems had practically switched roles. The Democrat-Republicans were more likely a party that supported “loose construction” and the Federalists the adverse. Succeeding the election of 1816, the Federalist Party virtually ceased to exist, giving the Democrat-Republicans a chance to cultivate the United States in its own perspective.

As the Democrat-Republicans evolved, so did the nation, as diverse divisions of people were granted suffrage rights, the rights to vote; beginning in the modern western states and then in the settled states on the Atlantic Coast. These new voters persuaded the Democrat-Republican party to ultimately give them greater thought as the ancient “aristocracy” of leadership was deteriorating. In the election of 1828, the Democrat-Republican party separated into two groups of disagreeing people, the Democrats and the National Republicans. From the Democrats became visible the first “common man” president in Andrew Jackson. Jackson insisted to be ruling from the will of “the People,” and from this way of thinking he took it upon himself to conserve the nation from the political and economic exploitations of the elapsed.

In order for Jackson to accomplish this, he vetoed many bills that he believed would cause danger to society or disregard his beliefs about right and wrong in the name of the “common man,” although Jackson may have vetoed some bills for revenge-loving reasons, rather than deciding on what is most beneficial to the United States. The Maysville Road veto was created because it was an enlargement of the National Road but only within the state of Kentucky. In addition, Jackson vetoed the National Bank recharter in 1832 (Doc. 6), primarily because of his internal distrust of banks. President Jackson’s political adversaries branded him “King Andrew” or “King Veto” because of the uncommon and bizarre power he seemed to be maintaining (Doc. 7).

The two-party system changed greatly from 1791 to 1833. The Federalist Party transformed from being an organization that held immense theories and a loose meaning of the Constitution to one that embraced a more strict interpretation and then vanished. All the same, the Federalists were reclaimed in 1828 as the National Republicans, taking on a wider idea that the central government should be more assertive than the state governments. The Democrat-Republicans began as a minority party that affirmed the Constitution was a fair and tough document to be obeyed, until they came across power and their ideology alleviated, as did their perception of the Constitution. By the period of the re-development of the two-party system, the old way of thinking of state governments having more power over its people, in nearly all instances, became common in the Democratic Party. 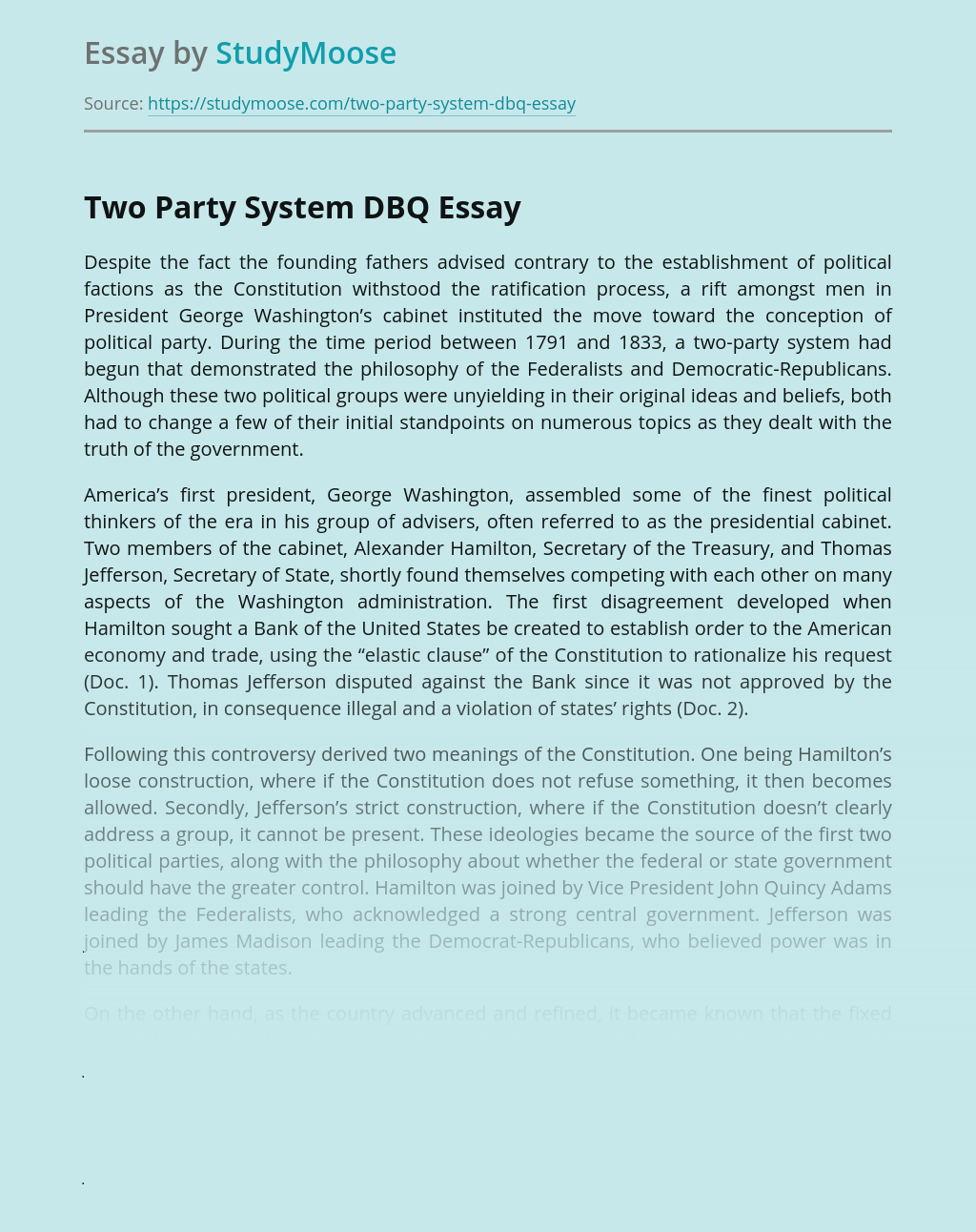 In a “Letter from Birmingham Jail”, Martin Luther King, Jr. said “injustice anywhere is a threat to justice everywhere.” This means that if we let injustice happen, then this injustice will grow and start to affect good people. We cannot afford to ignore something bad happening in one place. If injustice occurs and no action...

From the annual reports we can conclude that Wal-Mart runs its stores as mass discount rate sellers, carrying between 60,000 and 90,000 different merchandise items in each shop. Wal-Mart purchases more than $22 billion in merchandise, turning its inventory over as typically as 4.5 times annually. Sam Club brings between 3,500 and 5,000 various merchandise...

Get Essay
Sport Psychology in the Film "Coach Carter"

Sports psychology deals with the mental and emotional aspects of physical performance. It involves describing, explaining and predicting attitudes, feelings and behaviours in an attempt to improve performance. In the film ‘Coach Carter,’ directed by Thomas Carter, sport psychology is used effectively to enhance the performance of a high school basketball team. However, this improved...

Punitive Articles of the Ucmj Article 89

“Any person subject to this chapter who behaves with disrespect toward his superior commissioned officer shall be punished as a court-martial may direct.” Context. (1) That the accused did or omitted certain acts or used certain language to or concerning a certain commissioned officer; (2) That such behavior or language was directed toward that officer;...