Theme of Travel in Time in Literature

Rebecca Stead is a real New Yorker. Born in Manhattan. Grew up on the Upper West Side. She went to P.S. 75, where her first published story appeared in the school magazine, The Spicy Meatball. At Stuyvesant High School she studied creative writing with the writer Frank McCourt. She did go out of town for college at Vassar, but she came right back to law school at New York University, where she met her husband, Sean O’Brien. She then worked as a public defender on criminal cases in the Bronx.

Don't use plagiarized sources. Get your custom essay on
“ Theme of Travel in Time in Literature ”
Get custom paper
NEW! smart matching with writer

She and Sean now have two sons, Jack and Eli. They live in the neighborhood where she grew up, and where When You Reach Me takes place. The family has moved a few times, but always to apartments close to Absolute Bagels. The bagels are too delicious to ever move away.

Rebecca and I met in 1997, as students in an adult short story workshop at the 92nd Street YMHA. She was a young lawyer and a fine writer.

Proficient in: A Wrinkle in Time

I was an editor at Delacorte, taking the class to get a break from children’s books. After the workshop ended, a few of us, including Rebecca, formed a writers’ group. But her job was very demanding; eventually she dropped out, and we lost touch. In 2003 I was delighted to hear from her. She was now taking time off between jobs to stay home with Jack and Eli, and to write. She brought me an early version of what became her first novel, First Light.

First Light is set on, and within, Greenland’s ice cap. In that book, Rebecca revealed an unusual talent: to examine the workings of the natural, daily world, while convincing us that astonishing things are possible.

Which brings me to When You Reach Me:

Rebecca was inspired by an article she read in the Times about a young man who appeared, wandering around with amnesia. Under hypnosis, he remembered that his wife Penny and children had been in a car accident, but could recall nothing else. His picture was broadcast all over the country, until he was finally identified by Penny herself. But it turned out that she was his fiancée, not his wife. And they had no kids yet. Which made Rebecca think — what if? What if he had lost his wife and kids, in the future, and somehow found his way back to prevent it? But lost his mind in the process?

About that time, Rebecca and her family moved to an apartment near the building where she grew up. The move made her want to write about her memory of herself and her first independence (being on her own in her neighborhood for the first time, what she observed, what she thought about) and about her emotional landmarks. Back then, there was a scary man on her corner, and she tried to understand: who is he, why is he there? He was a mystery she was always trying to figure out. He became the anchor as she wrote When You Reach Me, although when she began, she had Miranda addressing “you” before Rebecca knew who that “you” was.

Rebecca sent me the first two-thirds of the book in December 2007, up to the line: “And then it was Christmas vacation.” I was hooked! I loved the tone, Miranda, the other characters, the way Rebecca had woven A Wrinkle in Time into the story, and how Miranda claimed the book for herself. It was fascinating to see the ominous, gritty Manhattan of 1979 through Miranda’s eyes. I hadn’t a clue who might be writing the letters. I wondered: where is this going? But I never doubted that she could pull it off.

The editing of this book was different from that of First Light, which went through several drafts, with line editing, rethinking, and reshaping. The language in When You Reach Me was always just right. Miranda’s voice was natural and distinctly hers. I’ve worked on hundreds of books, and this is the only novel that I did not line edit. I don’t believe that I changed a word in any draft.

Caroline Meckler, associate editor, had many valuable editorial suggestions. Revisions were subtle: refining, linking, adding clues, shading characters. When questions from readers came up (such as, Could Julia have more of a role? or, Why did the laughing man lie under the mailbox?), Rebecca quickly thought of inspired solutions that deepened the story immensely in a few lines.

We talked about A Wrinkle in Time. If the book was going to stay in, it had to play a significant part. Rebecca read and re-read it from the perspectives of the different characters in When You Reach Me, and added scenes where the kids discussed A Wrinkle in Time and time travel. We hoped that L’Engle’s iconic novel would help develop the characters and establish the possibility of time travel for readers who found that idea challenging.

Readers like me. Whenever I was actually talking to Rebecca, it all made beautiful sense. I felt so smart! A few hours later, I’d call her and say, “Wait! Wait a minute. Why did . . . ?” and I’d type madly as she explained, so I could hang onto it. Rebecca was endlessly patient. Though I was slow, I knew that young readers would understand. Children are open to big questions about the universe and can grasp all sorts of ideas that many adults cannot.

Rebecca was very careful about giving the reader enough clues to believe in the time travel and the logic, but not to get bogged down. We shared drafts with new readers, adults and children, to make sure that revisions hadn’t created any holes or contradictions in the plot. All along, the goal was to be certain that the logic would stand up to the merciless scrutiny of a smart kid. Someone who would finish the book and then go right back and start again, reading so closely that she or he would spot any inconsistency. We didn’t want to let that reader down.

Sometimes in the subway I see a sign: Take a class! Improve yourself! Meet new people! Change your life! That was some workshop at the Y in 1997. Who knew? Who knows? It’s New York City. Anything is possible. But first, you have to lift the veil. Rebecca Stead is a rare storyteller. In only two books, she has shown us a new way to look at the natural world, and to see it as more flexible, more responsive to human perseverance, faith, and genius, than we ever knew. When You Reach Me begins with a quote from Einstein: “The most beautiful experience we can have is the mysterious.”

There is still mystery at the heart of Rebecca’s novel. There’s plenty to wonder about after you finish the book. Just as we wonder why our feelings can change so suddenly, or why someone like the laughing man appears on the corner one day. Or whether something astonishing could ever happen one block from home. When I walk by the corner Rebecca wrote about, I think of Miranda, and Sal, and Marcus, and Julia, and Annemarie. I think of twelve-year-old Rebecca, who inspired this story. I think of the children who now claim the book for themselves.

Theme of Travel in Time in Literature. (2021, Dec 03). Retrieved from https://studymoose.com/theme-of-travel-in-time-in-literature-essay 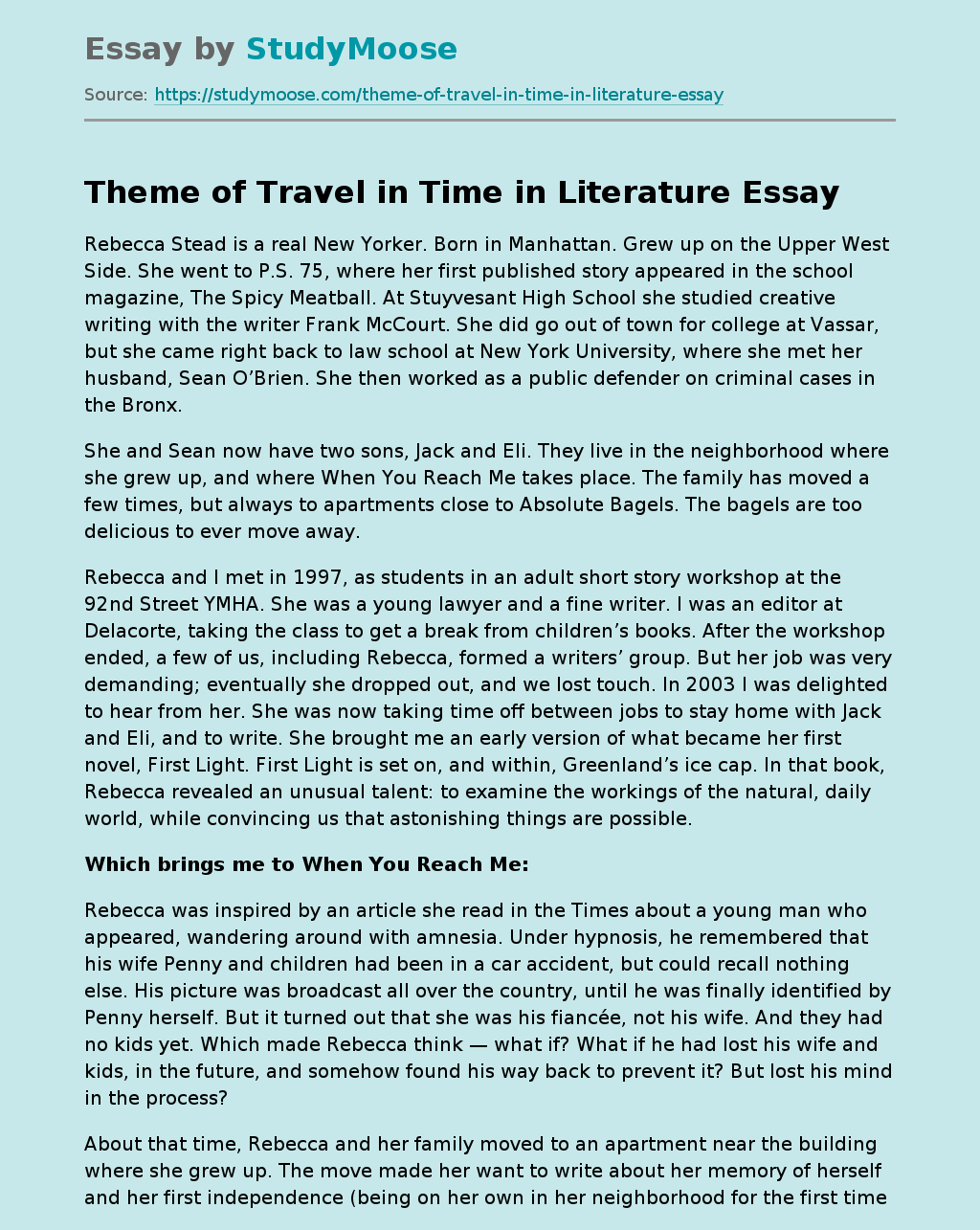