Kindred, by Octavia Butler, explores slavery through a time-traveling experience. The main character, Dana, is thrown into the antebellum south during the height of slavery. Dana is a modern-day African American woman living in Los Angeles. While celebrating her twenty-sixth birthday with her husband, Kevin, Dana is abruptly forced to time travel from the year 1976 to a Maryland plantation from 1815. After repeated time travel, it becomes evident that Dana’s time travels are related to her ancestor, Rufus Weylin, a caucasian slave owner.

Every time Rufus is in danger, Dana must spontaneously travel back in time to rescue him. It is Dana’s mission to keep Rufus alive to ensure that her bloodline survives. Through her travels, Dana tries to teach Rufus morality and help keep his childlike innocence. But despite her best attempts, Rufus turns out to be a reflection of his father, Tom Weylin, a brutal slave master who abuses and rapes his slaves. Rufus eventually follows in his father’s footsteps and rapes Alice, one of Dana’s ancestors.

Proficient in: Feminism In Literature

This act ultimately creates Dana’s bloodline. Finally, Dana puts an end to her time travels when Rufus attempts to rape her, courageously killing the cold-hearted slave owner with a knife. In doing so, Dana frees herself from the past and can return back to her modern-day life.

Throughout the novel, Butler explores the theme of racialization and intersectionality. Racialization is when people ascribe meaning to the way that one looks. For instance, when Dana travels back in time, she is automatically labeled as a slave.

Regardless of the fact that Dana is actually an intelligent, independent woman, her race becomes her identifying factor when she enters the antebellum south. Dana tells Kevin, ‘We’re going to have to fit in as best we can with the people here for as long as we have to stay. That means we’re going to have to play the roles you gave us” (p.65). In order to fit in with the word around us, Dana pretends to be Kevin’s slave, while Kevin takes on the role of her master. Additionally, when Dana is forced into the barn and beaten by Tom Weylin, she feels absolutely powerless. Despite being from the future and having an education, she becomes helpless in the situation. Dana begins to understand how impossible it is to stand up to slave owner, thinking to herself, “See how easily slaves are made?” (p.177). Her experience taking on the role of a slave in the Antebellum South gives her a window into how powerless and afraid slaves feel, making her realize “how easily people could be trained to accept slavery.” (p.77). Dana fears Weylin and questions whether or not she should try to escape.

Furthermore, Kindred touches base on another significant theme- intersectionality. Intersectionality recognizes all social attributes of an individual: geographic location, religion, age, gender, class, sexual orientation, disability, race, etc. In Dana’s present-day life, she is an established young woman who has made a name for herself through book publishing, “working out of a casual labor agency” (p.2). Here, she is not defined by her race or her gender. Dana provides a brief introduction of her modern-day life, explaining, “We had moved from our apartment in Los Angeles to a house of our own a few miles away in Altadena. The moving was a celebration enough for me” (p.12). This demonstrates how much freedom Dana has in her modern-day life. She can decide where to live and what kind of lifestyle to lead. However, in the antebellum south, Dana’s race forces her to take on the role of a slave.

When she first travels to the past and saves Rufus from drowning, she encounters violence and racism. She states, “I turned, startled, and found myself looking down the barrel of the longest rifle I had ever seen. I heard a metallic click, and I froze, thinking I was going to be shot for saving the boy’s life. I was going to die.” (p.13). The man behind the rifle, Tom Weylin, doesn’t even give a second thought about Dana’s heroism. Instead, he tries to kill her because he witnesses Dana, an African American woman, holding his son. Moreover, Dana does not have even the slightest opportunity to pursue a career on the Maryland plantation, for she is a slave. Ultimately, Olivia Butler uses Dana as a tool to explore racial issues and the history of slavery. Dana’s time travels provide a comparison between the past and the present. The themes of racialization and intersectionality become evident with every trip that Dana takes to the antebellum south. 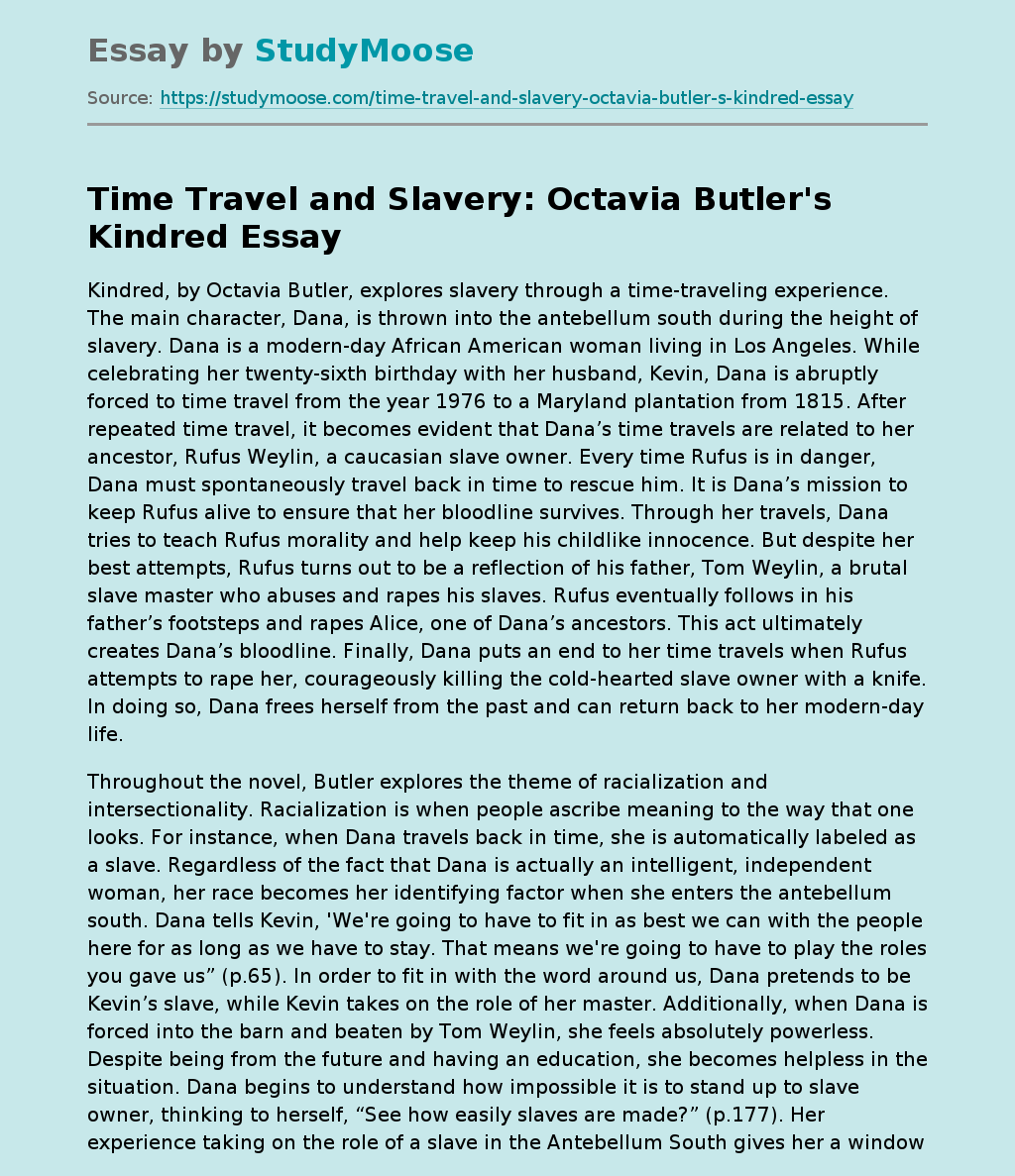