Analysis Of "Kindred" by Octavia Butler

There are various connections that can be made between the characters within the novel “Kindred” written by Octavia Butler. The majority of these connections relate to four of the course themes we’ve visited in past few weeks: double consciousness, collective trauma, diaspora, and power relationships. The protagonist, Dana Franklin, traveled between the past and present and in her travels she met a variety of different people, including the enslaved African Americans and their White owners of the 19th century, as well as her ancestors, one in particular is the cause of her time travel.

Don't use plagiarized sources. Get your custom essay on
“ Analysis Of “Kindred” by Octavia Butler ”
Get custom paper
NEW! smart matching with writer

Alice and Dana had a sisterly relationship, as some of the other characters had commented, Sarah once told Dana after Alice’s passing, “You and her was like sisters… You sure fought like sisters, always fussin’ at each other, stompin’ away from each other, comin’ back.

” Although a brief description, this is a very accurate summary of their relationship. Their double consciousness was first realized when Rufus had pointed out that they were both “one and the same”, this meaning that they were two halves of the same person. Not only did they look alike, but the line between their roles in the Weylin household were heavily blurred.

Alice was the “love” interest of Rufus while she was alive, although her only use to him was to either sexually abuse her or use her as his personal punching bag. She had once told Dana that whenever she’s around, the mental and physical abuse isn’t as bad as it regularly is. On the other hand, Dana has an immense amount of freedom in comparison to Alice, even to the other slaves. Due to the unspoken set of rules that Dana and Rufus share, he doesn’t try to pursue any sexual relationship with her until the end of the book. As Dana had once said, “I could accept him as my ancestor, younger brother, friend, but not as my master, and not as my lover.”

Alice is openly spiteful towards Dana because of this, but it is also obvious that the reason why she always comes back to Dana is because, like a sibling, she is used as an outlet for her pain, fear, and hate, and knowing that she could have done more to lesson Alice’s suffering, Dana allows puts her feelings aside and accepts the onslaught of abuse. Both of their relationships with Rufus also lead to their collective trauma as they are both abused by him, and, in different ways, he takes something from them that leave them unwhole. For Alice, he not only rips her freedom from out under her, but he also “sells” their children, which were the only reasons that she had stayed on the plantation for so long. For Dana, he too took her freedom and the power that she once held over him had vanished completely, but it’s possible that he is also the reason that she there was a short stump in the place of her arm.

The relationship that was shared between Dana and Rufus was the most complex relationship of them all. A list of unspoken rules shared between the two had been the foundation of their relationship, as they had both known that one could not live without the other, that if either one of them died, the other is just as good as dead as well. Ever since Dana had first saved Rufus from drowning in the river, she had attempted to instill some morals into the young boy in hopes that he wouldn’t be as corrupt as his father or the other slave owners, as she knew that that was what he would soon become. Although, with each time that she returns to save the boy’s life, he grows older, and he becomes more mature as well as stubborn, not as easily goaded into doing nice things for the slaves, like setting most of them free, or not selling any of them as his father does. Eventually, the reigns of power are no longer held by Dana, and the influence of the 19th century has finally rubbed off on Rufus for the worse. No longer small and feeble, Rufus has Dana sent to work in the fields, has her whipped, hits her multiple times, and eventually held the barrel of a rifle to her head, though the line is completely crossed when Rufus tries to have sex with Dana, which she responds to with the thrust of a sharp blade in his side.

Twice. The scale of power begins tipped towards Dana, then towards Rufus, then for another brief moment back to Dana. Their relationship is also, in a way, diasporic, as Dana is constantly out of place in the 19th century throughout the entire book. She brings back with her the knowledge of the future, though sparse, as well as new medicines, devices, and ideas, though because of her skin color she is seen as no more than either a “smart nigger” to the white folks and a “white nigger” to the blacks; nothing more than a nigger. Even though she wasn’t accepted by most of the other slaves and the whites who held power over her, Rufus, still needed her in many different ways and was very clingy at times, even as he gave his last long and shuddering sigh, he simply could not let go of Dana, both literally and physically, as his hand still grasped her arm in the afterlife.

When Dana arrives from the past for the last time, she discovers -excruciatingly painfully- that her arm had somehow meshed and conjoined with the wall of her living room. The exact spot where Rufus had held her in his final moments marked the loss of her arm, “from the elbow to the ends of the fingers,” It is unknown whether or not Dana’s arm is left in the past, still held between the cold fingers of the dead, as Rufus’ body was believed to be burned to ashes and never found, along with the Weylin estate. Dana’s graphic physical loss shows what slavery truly is outside of popular novels, history books, and dramatized television where the actors practice the pain and suffering that their ancestors dealt with. The loss of her arm shows many different things, like how even though African Americans today have been removed from slavery over time, who they are today was planted and rooted in the past. Also, slaves had constantly suffered from both emotional and physical abuse at the hands of their owners, yet they were extremely dependent of their owners. Dana is subjected to horrific pain at the hand of Rufus, yet she still feels pity for him when he comes crawling back to her, as he is both her master and her kin-dred, so she alternates between despising him and feeling empathetic towards him. Lastly, Dana’s severed arm is a horrible loss, and it is meant to capture the horror of slavery. It is also significant that she suffers her injury because Rufus hangs on to her.

Like Rufus holding onto Dana, the past has a “hold” on the present, the sacrifices of the past shape the present today. Dana loses an arm which is an important body part, especially for a writer, although she escapes with her life. The slaves of the past had sacrificed skin, bone, and sanity, yet a lot of them escaped, albeit scarred. Dana’s horrific injury makes all of the sacrifices slaves made painfully real in order to make lives better for generations to come. Part of her lies in the past, and so does part of todays’ generation. In conclusion, the strange relationships that Dana had formed with her ancestors, Alice and Rufus, had in some ways, led to the loss of her arm. Her entire existence was dependent on the two of them having her great grandmother Hagar, and although Alice may have survived without Dana’s influence, Rufus was definitely dependent on Dana as well. Octavia Butler had wanted readers to take with them the reality of how we are still deeply rooted within slavery and it still has an affect on us today, even though it had ended over 140 years ago. As Dana had witnessed first hand, slavery has never been a free occurrence, anyone who was apart of it in any way never came out of it as they once were before; they never escaped slavery whole again, but as less of the person than they were before.

Analysis Of "Kindred" by Octavia Butler. (2016, May 22). Retrieved from https://studymoose.com/analysis-of-kindred-by-octavia-butler-essay 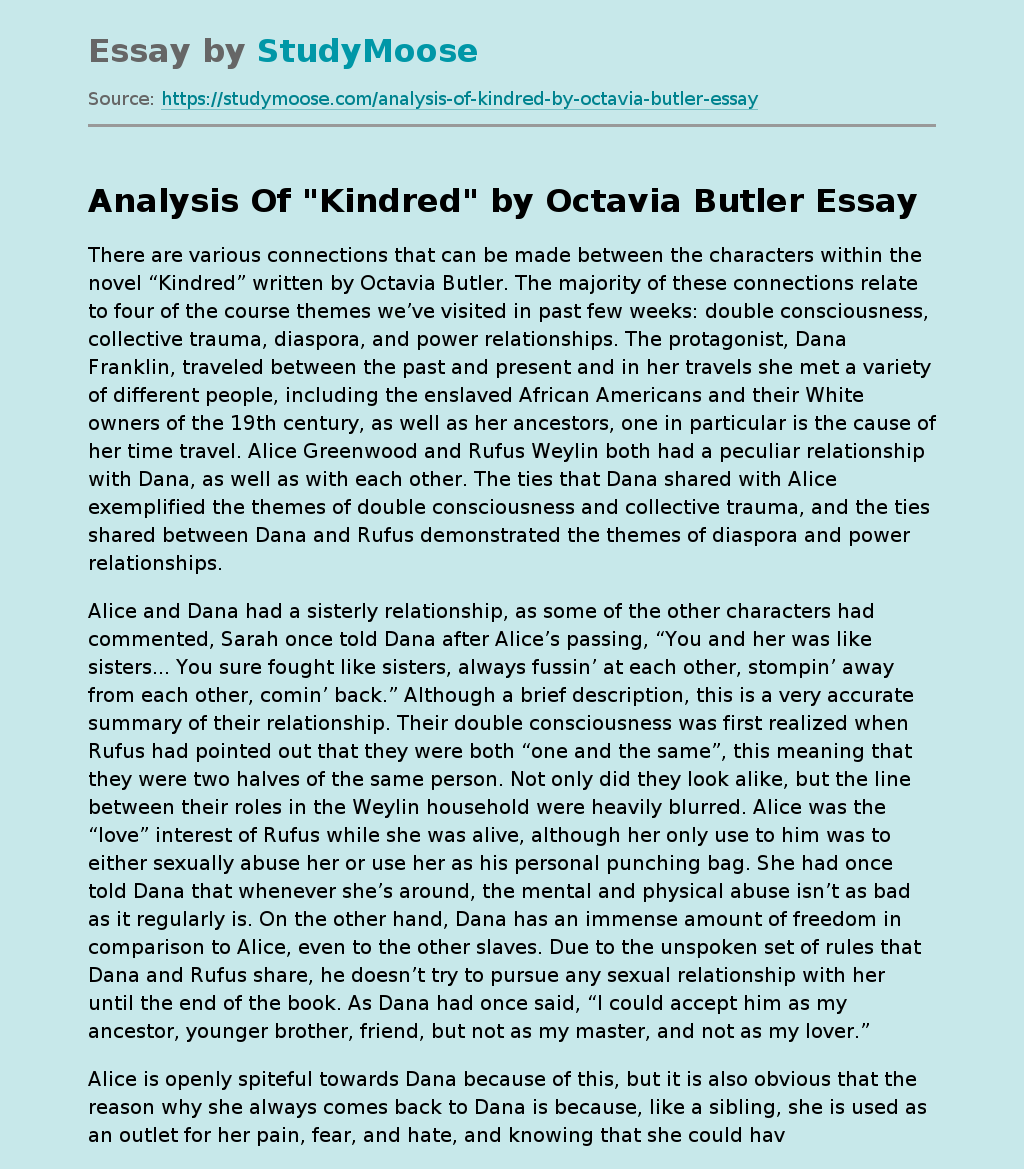