Rufus from the novel "Kindred"

Selfishness, insecurity, pridefulness, and loathsomeness. These are all words that can be used to describe Rufus from the novel, Kindred. The personality and characteristics of Rufus do slightly change over time, but in the end he was still the malevolent man he always was. This has happened because of the different influences he has had in his life, the amount of loneliness he went through, and the way white people treated blacks. Because of all these effects that Rufus dealt with, it caused him to become the person he was.

Don't use plagiarized sources. Get your custom essay on
“ Rufus from the novel “Kindred” ”
Get custom paper
NEW! smart matching with writer

The influences in his life were probably the biggest reason for Rufus becoming a dreadful person, one of the major influences is Tom Weylin. He abused and showed little care for his son and seemed to only care for himself. For example, when Rufus broke his leg, he states, “Guess it’s broken alright. Wonder how much that’ll cost me” (Butler 65). This shows how the care of his money and own problems overpowered the care of his son.

This led to Rufus following into his footsteps due to the fact anyone raised with an abusive, neglecting, and abhorrent father like Tom Weylin would turn out to be a distasteful person. Rufus already acquired racist and hateful traits from his father, when he burned the drapes, Dana’s reaction was, “The boy already knew more about revenge than I did. What kind of man was he going to grow up into?” (Butler 25). This foreshadows and shows that Rufus resembles his father in the soon to be future.

Since his family full of racists are the only influences he has in his life, it would be hard for him to not turn out the same. The only positive role model he had was Dana. Another impact in his life was Margaret Weylin, bitter and bothersome women married to Tom Weylin. She had the tendency to baby Rufus and be very attached to him. She has an impact on Rufus because of her racism and hate towards the slaves. Because of her being ever-present in his life he soon became increasingly irritated, not just towards Margaret but to everyone around him: he then grew to always have this trait and it impacts the people around him.

Another factor that impacted him and eventually made him into the ruthless slave owner he is was loneliness. One person that has caused that feeling of being alone is Alice. Rufus wanted at least one person to care for him in his life and since his father couldn’t fill that role, he was desperate for Alice to love him. Alice did everything she could to stay away from Rufus but his persistence drove Alice to suicide. This gave Rufus thoughts of killing himself. After this Rufus was at one of the lowest points of his life, filled with regret for having caused something like this. This further shows how he changed from a little boy with some bad habits to a destructive man with nothing but desolation in his heart.

During this time period Whites viewed blacks as unequal, untrustworthy, foul, and they treated them as property, not humans. Since they were treated this way, Rufus became very prideful, thinking that he was better than everyone. His father whipped and abused the slaving, showing Rufus that this type of behavior is okay. According to Dana, [Tom Weylin] wasn’t a monster at all. Just an ordinary man who sometimes did the monstrous things his society said were legal and proper (Butler 134). This shows how people saw the way the blacks were being treated as okay, this horrified Dana and Kevin. Rufus, on the other hand, was fine with treating slaves this way and showed no care for them.

Overall, all these ties into Rufus being a terrible person because of the things he has done and the way he has acted. He has changed over time from a mischievous little child to a young adult with horrific impacts to the people around him. He was always a bad child but got worse as time went on. Because of all these effects like his father, Alice’s suicide, and slavery of that time it caused Rufus to become the person he was.

Rufus from the novel "Kindred". (2019, Dec 02). Retrieved from https://studymoose.com/rufus-from-the-novel-kindred-essay 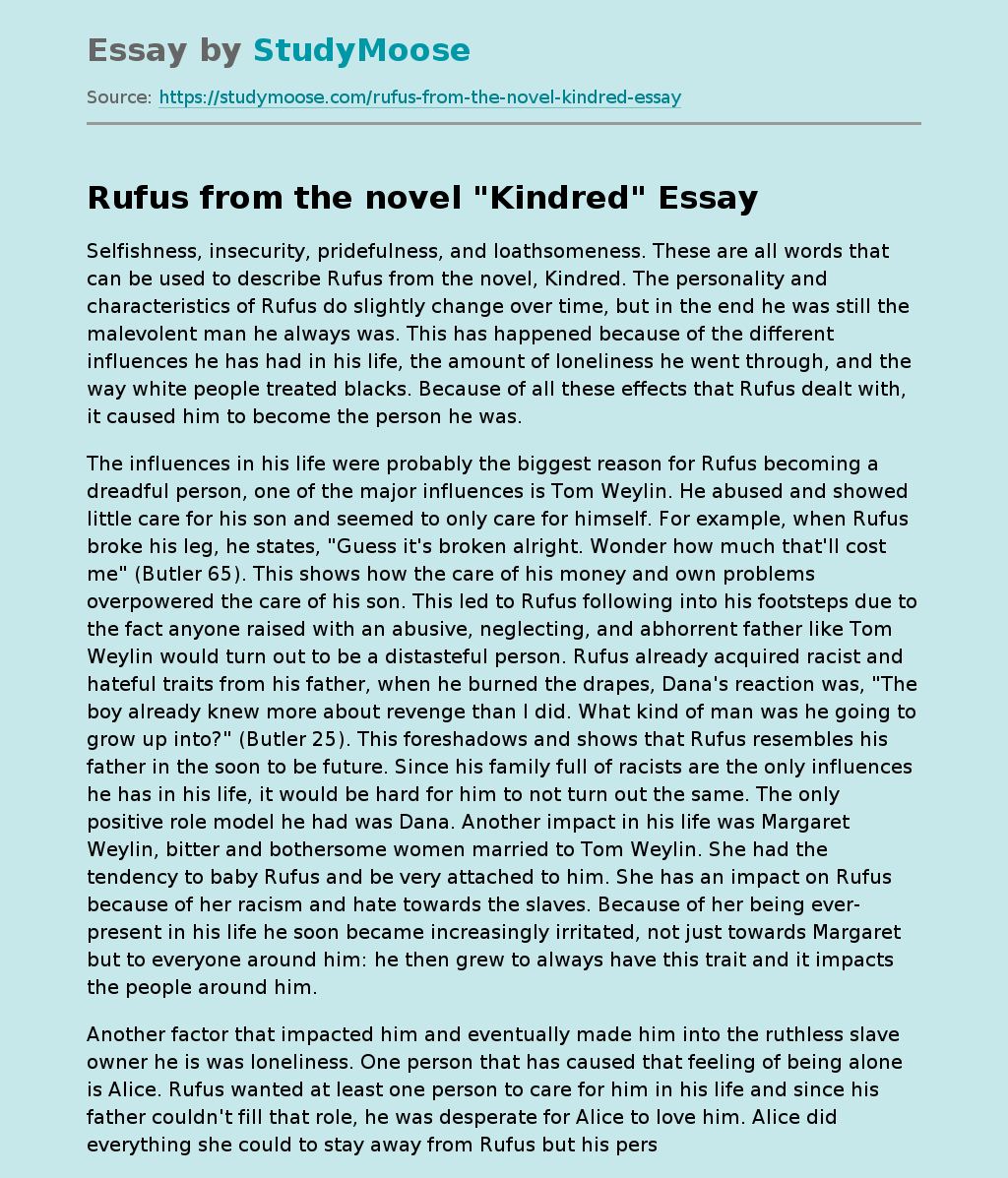