The Stages of Development in Adult Learning

Don't use plagiarized sources. Get your custom essay on
“ The Stages of Development in Adult Learning ”
Get custom paper
NEW! smart matching with writer

Many theories and philosophies have emerged with the goal of helping people better understand their own learning style and developmental process.

All those theories make it so hard to define what learning is or understand what causes change in people but they all provide us with exciting ideas that we can use to have a much broader approach about learning and development. My philosophy of education has indeed been modified as I engaged in studying different theories. My vision of education is now broader so is my understanding of human development. Having always believed that all learners bring some skills and knowledge into the learning experience, I decided to use a wall of fame as my representation of what learning is.

First of all the bottom layer of my wall will represent the theories of Jean Piaget with four major developmental stages. According to Piaget, the child is a “little scientist”. Learning happens in the early stages and gets more and more complex as the child grows older. Learning, in those stages, is fully the responsibility of the individual as a result of a strong willingness to experiment and discover, it is the foundation of the wall.

With a strong foundation, the learner can use the acquired skills and knowledge as little as they are to engage in other types of learning.

Learning at the early stages as Piaget admitted does involve the intervention of peers and even adults at some point but, nevertheless, the majority of the credits in the learning enterprise go to the learner as an individual. The developmental stages of the individual are however vital steps that all people go through in order to be receptive to the environment in which they evolve and in which much learning has yet to be done.

Many other theorists share Piaget’s ideas but tend to give more of the credits to the learners’ social environment including people and organizations. People belong in groups of some kinds that influence them every day and dictate most of their actions. After going through the experimental stages as described by Piaget, the learner needs some refinement of the skills acquired. Interacting with other people and learning from their more advanced skills makes the learner a better person and helps his proper development.

Other people’s intervention in the learning process provides a more solid foundation because of the level of knowledge the learner is exposed to. The second layer of the wall of fame is occupied by Urie Bronfenbrenner whose idea of development is almost fully dependant on society and systems. According to Bronfenbrenner, we do not grow in isolation. In his proposition, Brofenbrenner emphasizes the importance of persons, objects, and symbols in people’s immediate environment.

Development becomes a process during which more complex interactions take place. In order to fully mature, the learner has to be in contact with both other individuals and other systems around him or her. The set of nested structure developed by Brofenbrenner includes almost all entities that govern human beings existence in a society. From the microsystem which connects the learner to his close environment to the macro system which covers a wider range, the learner is exposed to a number of challenges that contribute greatly to his or growth.

With my wall of fame, the learner can very well engage in his or her own learning stages as stated by Piaget but will move right into the nested systems in order to gain a solid foundation and be more efficient. The learner learns a lot through the nested systems where he or she comes in contact with qualified people and sophisticated systems. During the learning and growth process in his or her context, the learner finds himself or herself capable of operating without supervision and reward. The learner then has reached the level called of self efficacy in cognitive development.

Such a theory as developed by Albert Bandura is a stage where the individual’s contribution to society is directed by how one feels, thinks, motivates oneself, and behaves. People set personal goals based on the knowledge acquired and the level at which they operate. A progressive mastery according to Bandura strengthened personal efficacy, fostered efficient thinking, and enhanced performance attainments”. Reaching that level will place the learner at the top of the wall like a star where the shining light will show to everybody the completion of a long itinerary.

The Stages of Development in Adult Learning. (2017, Feb 03). Retrieved from https://studymoose.com/the-stages-of-development-in-adult-learning-essay 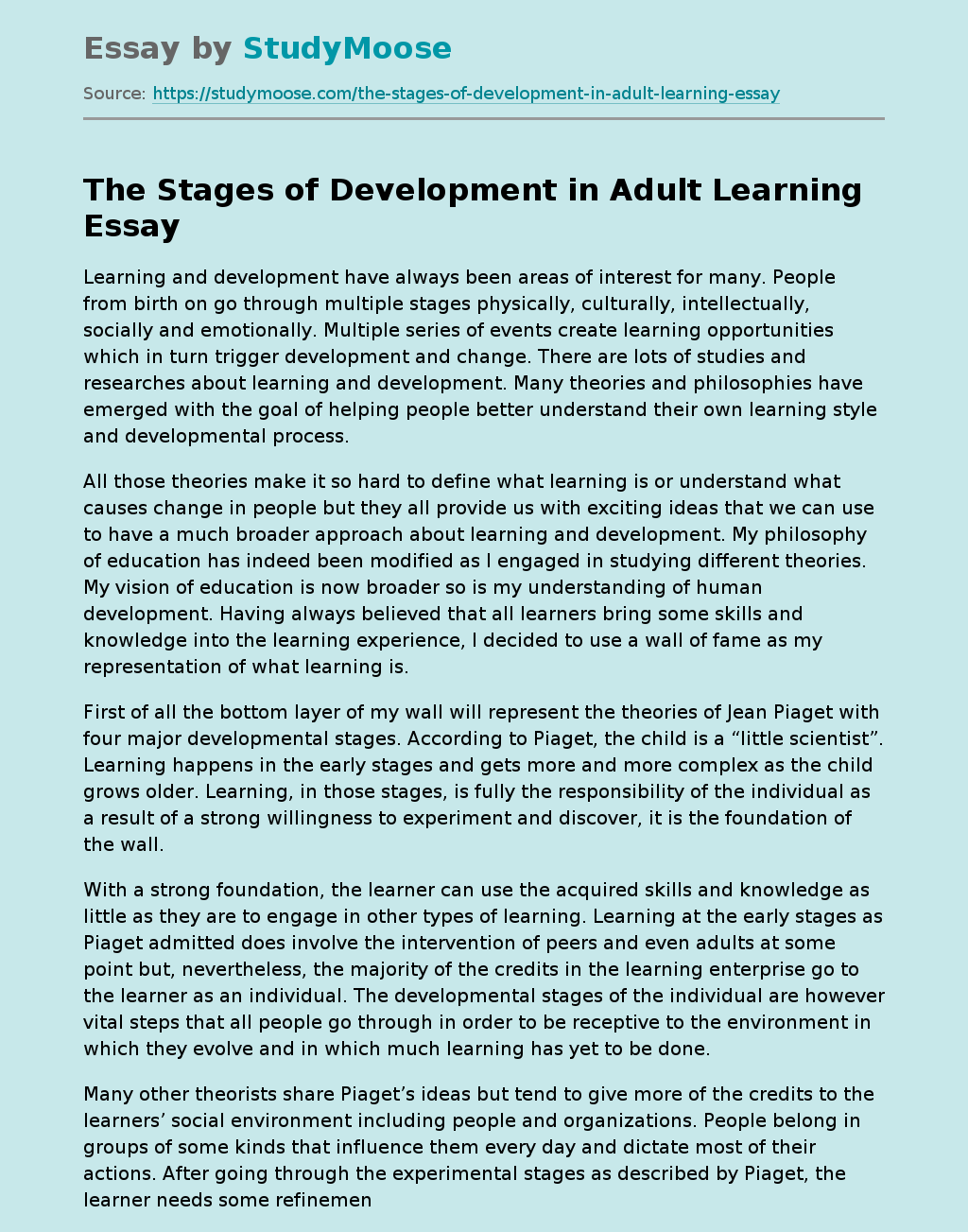