In Sue Monk Kidd’s novel, The Secret Life of Bees, the reader is introduced to the fourteen year old Lily Owens. It’s 1964 in South Carolina when Lily is forced to come to terms with her confused memory of her mother’s death. As Lily travels to Tiburon with Rosaleen (her black housekeeper and nanny) in hopes to find the truth about her mother she develops into a young woman and learns the importance of female empowerment. Through the narrator Lily and the use of narrative and religion, Kidd emphasizes two main themes considered in this analysis: racism and the importance of women empowerment.

Don't use plagiarized sources. Get your custom essay on
“ The Secret Life of Bees: Plot Overview ”
Get custom paper
NEW! smart matching with writer

Racism is very apparent and common during the time period in The Secret Life of Bees. Kidd uses examples of racism in the novel to show how it affects each character differently. In the very first chapter of the novel, the events that take place between Rosaleen and some racist men lead the reader to see how brave and steadfast Rosaleen’s character is, and how this encounter influences the rest of the novel.

“Coming alongside the men, Rosaleen lifted her snuff jug, which was filled with black spit, and calmly poured it across the tops of the men’s shoes, moving her hand in little loops like she was writing her name–Rosaleen Daise–just the way she’d practiced” (Kidd 32). This is the first time Lily has truly seen racism and the cruelness that goes with it. When the men ask Rosaleen to apologize and she refuses Lily believes that she is doing so out of defiance.

“‘You have to be dumb to pour your snuff juice on those men’s shoes like that. And then dumber not to say you’re sorry if saying it will save your life” (Kidd 54). The author writes this scene to highlight that Lily will never be able to truly understand why Rosaleen did what she did because of the color of her skin and to foreshadow other racist aspects that occur in the novel.

While Kidd describes Lily, not as a stereotypical racist living in South Carolina, she lets the reader know that Lily can be prejudice at times as well as naive. Lily’s assumptions about black people are proven wrong when she says, “…I thought they could smart, but not as smart as me, me being white. Lying on the cot in the honey house, though, all I could think was August is so intelligent, so cultured, and I was surprised by this” (Kidd 78). She learns that she must overcome racial stereotypes because humans are more than just their skin color or ethnicity. Lily is now figuring out that racism has a domino effect because it doesn’t just create conflict between people it also can strain relationships. “An example of this occurs when Lily unexpectedly falls for a black man named Zach Taylor. As time goes on their different viewpoints become apparent as they talk about their ambitions. “I’ve just never heard of a Negro lawyer that’s all. You’ve got to hear of these things before you can imagine them.” “Bullshit. You gotta imagine what’s never been” (Kidd 121). Zach is an important character in terms of Lily’s character development because he challenges her to look at things from a different perspective and to become more open-minded. 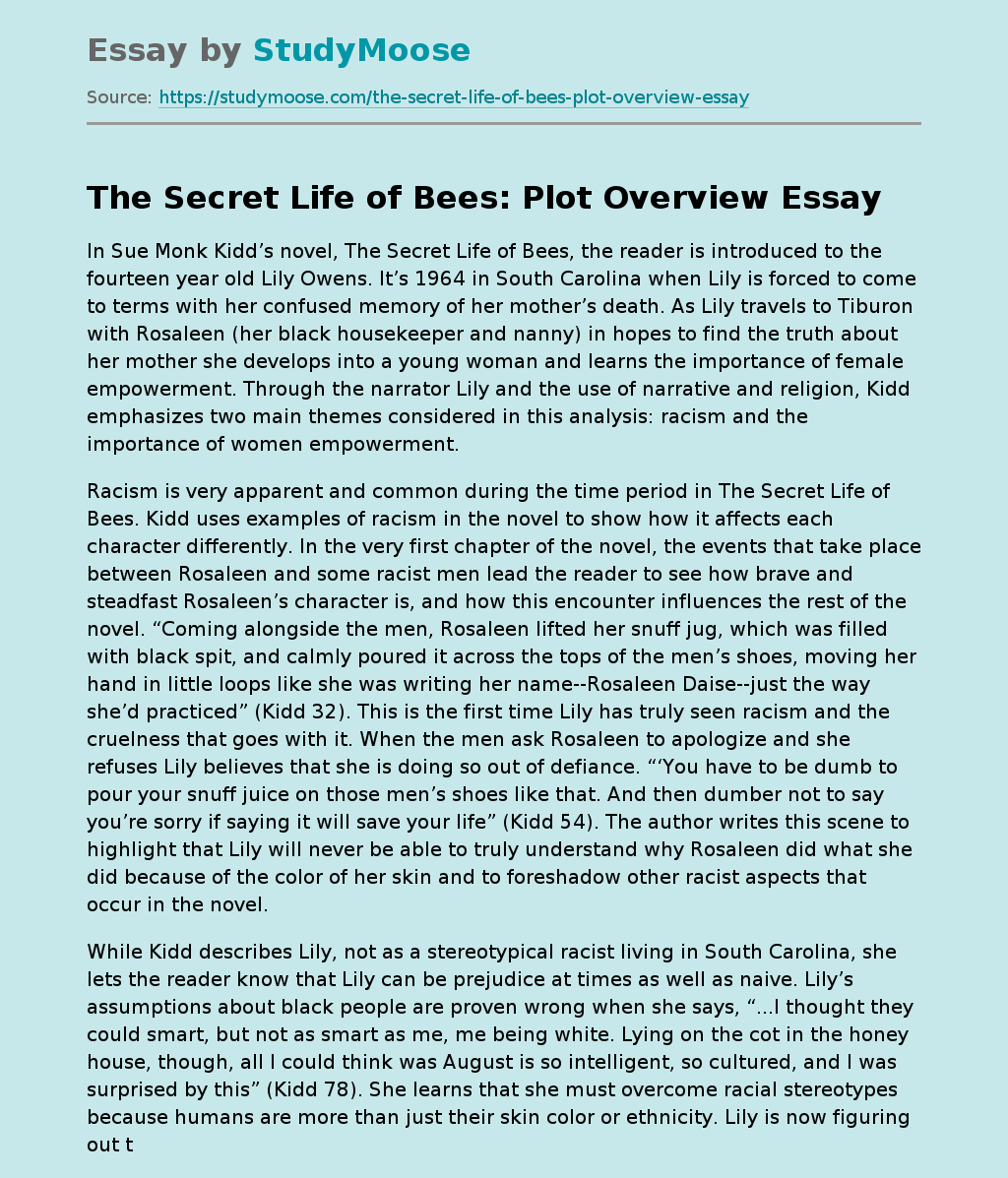