Main Conflict in "The Secret Life of Bees"

The main character is Lily Owens. She is a 14-year-old white teenager. She cares about knowing the truth about her late mother, other than the many lies that her father T-Ray has told her. One of her goals was to be able to stand up to T-Ray and when she does, she feels like she has done something that she would have never done without the help of August. Now she can learn to love and forgive her mother even though she didn’t always make the right decisions.

Don't use plagiarized sources. Get your custom essay on
“ Main Conflict in “The Secret Life of Bees” ”
Get custom paper
NEW! smart matching with writer

Yes, the author does want the reader to sympathize with the character as if she was in the situation in real life.

August Boatwright is a strong black woman that never wanted to get married. August works as a beekeeper so that she can feed and clothe herself and her sisters. August has always been at peace with the world. She is very caring and loving. Her role in the novel is to guide Lily through her path to womanhood. She teaches Lily how to forgive even if that person has done her wrong.

She also can help Lily in finding out more about her mother.

The novel is set in South Carolina during the civil rights movement in 1964, which affects the character because she was not taught much of how to deal with the racism and discrimiation that is going on during that time.August knows more about Lily”s mother more than anybody.People’s lives are not at all what they seem. The reader might have chosen this title because since Lily’s mother was so adamine with bees, the bees actually could represent Lily.Water is a symbol in many different ways in the story, but mostly I think that it is a symbol of restoration and peace even though it can kill people.The main theme in the book is racism and discrimination. The writer is trying to tell us that during those times white people got away with anything, while black people couldn’t do anything but take it. The universal truth is that races were separated by law and blacks had no rights to anything.

Main Conflict in "The Secret Life of Bees". (2021, Dec 02). Retrieved from https://studymoose.com/main-conflict-in-the-secret-life-of-bees-essay 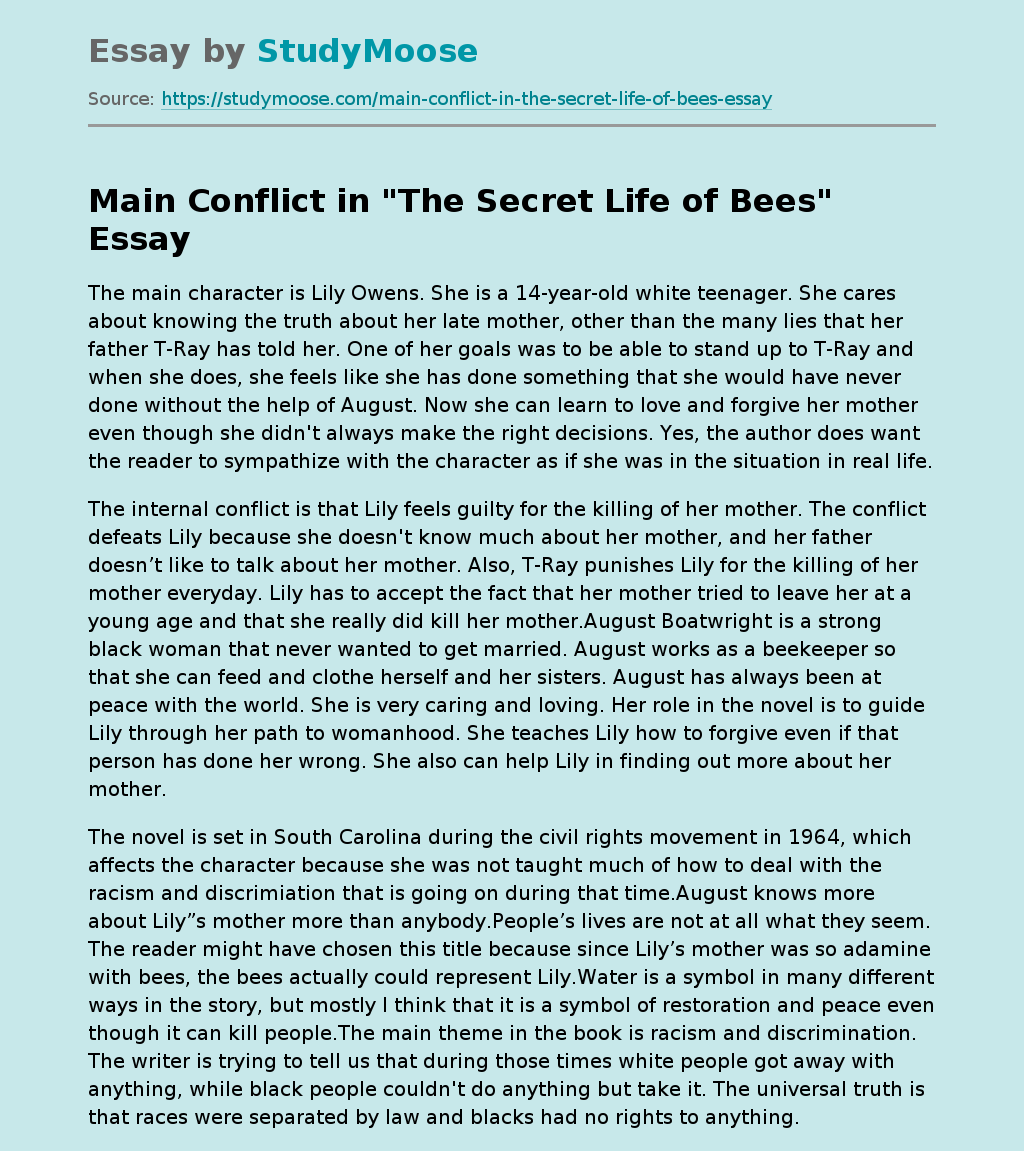