Examples Of Racism In The Secret Life Of Bees

The irrationality of racism is displayed throughout Sue Kidd’s “The Secret Life of Bees”. Kidd displays all the characters with dignity. She demonstrates the different personalities of whites and blacks during this time. When Rosaleen goes to vote she is harassed for no reason by white men. Lily feels that all blacks are like Rosaleen; uneducated and laborers. Through experiences like these throughout the book, we see what it was truly like to live in the south and how children were exposed to racism.

Don't use plagiarized sources. Get your custom essay on
“ Examples Of Racism In The Secret Life Of Bees ”
Get custom paper
NEW! smart matching with writer

When Lily meets the Boatwright’s her stereotypes diminish and she begins to overcome her own racism. Kidd portrays the characters as what we would find in real life during the time of the Civil Rights act and ultimately demonstrates the struggles and prejudice that African Americans faced.

The struggle of racism and overcoming it is seen throughout the novel. We see Lily begin to fall in love with a black boy named Zach who lives with the Boatwright.

The discrimination and “intensifying racial unrest (Penguin 1), of their time keeps Lily from pursuing her feelings at first. Lily struggles with her own stereotypes and learns to overcome them by “finding healing and hope among friends who don’t judge you…” (Smith 2). Lily believes all African Americans are uneducated and laborers like Rosaleen. The intelligence of August surprises Lily and she begins to see August as more of a motherly role to look up to. Zach dreams of being a lawyer even though he is black. He tells Lily about his plans in chapter 7 “I’ve just never heard of a Negro lawyer, that’s all.

You’ve got to hear of these things before you can imagine them.”-“Bullshit.

You gotta imagine what’s never been.” (Kidd). Lily doesn’t want to discourage him but she like most others has never heard of a black lawyer before. The way she believes is people have roles that are set like black women such as Rosaleen are housekeepers and black men aren’t lawyers. August helps Lily to understand them better. She explains that she has chosen herself to be a beekeeper and Zach has chosen to be a lawyer. They do not accept their fates; they believe that they have abilities that go farther than what society has chosen for them. August and Zach continue to go after their dreams despite what anyone else thinks.

Lily, like most children during this time is exposed to segregation and racism. Rosaleen goes to vote and three white men harass her. The men tell her she has to be able to write her name, implying she cannot. When Rosaleen stands up to them she is beaten and thrown in jail. During this “time when the world was changing…”(Burrell 3), we see Lily change and grow to love the Boatwrights. Lily is surprised by the bonds between them and begins to feel part of their sisterhood. Lily realizes the power of their female community and “the ability of love to transform our lives” (Penguin 1).

Even after the Civil Rights act African Americans were still not treated equally. On the night of May’s death, a policeman visits August’s home. He tells Lily that she should live with her aunt or another family member. He didn’t think it was right for a white person to live with blacks. Even though he can see how Boatwright’s love and care for Lily his prejudice tries to pull Lily away from them. When Rosaleen goes to jail she is treated unfairly. The white men demand her to apologize and she refuses. When she refuses they hit her on the head with a flashlight and then Rosaleen and Lily are put in a jail cell. Because Rosaleen is black her side of the story didn’t matter. This scene shows how during this time people “were being judged for their sentiments as well as the color of their skin” (Smith 2).

Examples Of Racism In The Secret Life Of Bees. (2020, Oct 11). Retrieved from https://studymoose.com/examples-of-racism-in-the-secret-life-of-bees-essay 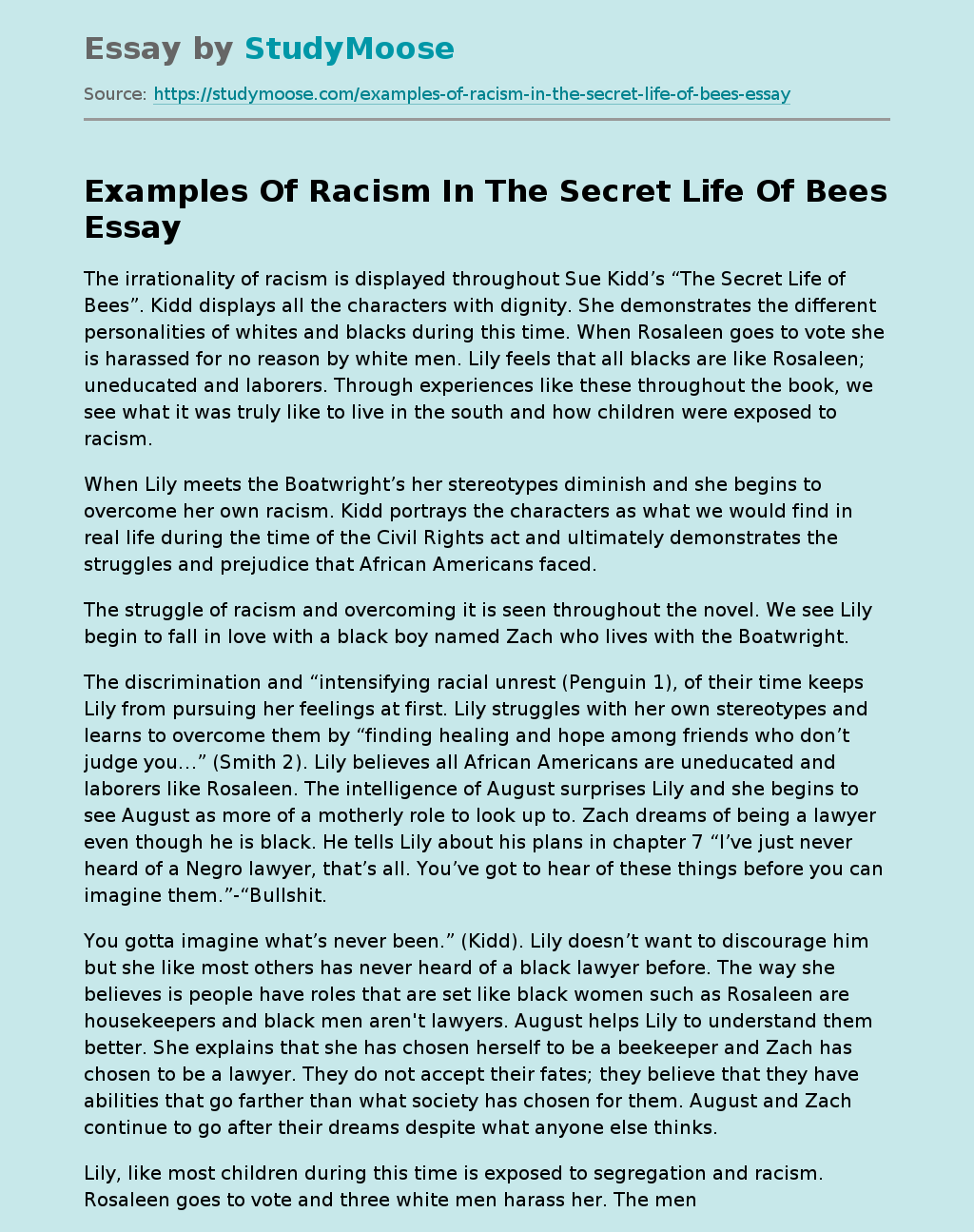