The Role of Feminism in the Secret Life of Bees

In Sue Monk Kidd’s novel The Secret Life of Bees, the theme of feminism often reoccurs. Throughout the novel, Kidd reveals the aspects and importance of feminine power and matriarchy versus the typical role of masculine leadership and authority. The teachings of Carl Jung, a philosopher who believes that society would be better by emphasizing the importance of feminine values versus the masculine, deeply influences Kidd’s writings. These principles are greatly displayed in the plot and theme of The Secret Life of Bees.

Don't use plagiarized sources. Get your custom essay on
“ The Role of Feminism in the Secret Life of Bees ”
Get custom paper
NEW! smart matching with writer

Lily’s desire for a mother, and the importance of having a mother, as well as Kidd’s portrayal of strong female characters show feminism as a key part of the plot of the novel. The main plot of the novel centers around Lily’s overwhelming longing for her mother and her search for a woman’s guidance in her life. Throughout the book, Lily speaks of her desire for her mother’s presence. “That night I lay in bed and thought about dying and going to be with my mother in paradise” (Kidd 3).

Lily emphasizes her belief that her mother would have been the best thing for her life at many points, including from the very beginning of the novel, with statements such as this: “This is what I know about myself. [My mother] was all I ever wanted. And I took her away” (8). When Lily stumbles across the Boatwright sisters, she finds a source of motherly wisdom and feminine guidance in August. August acts almost as a substitute for the motherly experience Lily has missed out on, giving Lily instruction and knowledge, such as “You know, some things don’t matter that much, like the color of a house.

But lifting a person’s heart –now that matters” (147). August also teaches Lily the importance of nature and love, and how they relate to society. For example, referring to the bees, August tells Lily “Every little thing wants to be loved” (92). Lily finally receives the maternal guidance and strong female role model she has been searching for, and finds joy in her experience of feminine ideals. The importance of female divinity within the plot also characterizes the novel’s bent toward feminine power.

Lily’s interest in Catholicism, which places importance on Mary, the mother of Jesus, is a point often brought up in the novel. “All I could really figure out was my mother had been mixed up with the Catholics somehow, and–I have to say–this secretly thrilled me” (58). Throughout the storyline, her fascination with Mary and the feminine divine grow as she spends time with the Boatwright sisters, who worship Mary. Mary quickly becomes a crucial ingredient in Lily’s character, serving as a source of guidance and inspiration for her.

I started thinking about the world loaded with disguised Marys sitting around all over the place and hidden red hearts tucked about that people could rub and touch, only we didn’t recognize them” (142). Most importantly The Secret Life of Bees is loaded with colorful and strong female characters. For example, Rosaleen’s stubborn attitude and refusal to back down to anyone contradicts typical expectancy for women to sit back and take the treatment men give them, especially for colored women in the sixties.

When a group of white males attempt to stir up trouble with Rosaleen, she responds with this: “Rosaleen lifted her snuff jug, which was filled with black spit, and calmly poured it across the tops of the men’s shoes” (32). And despite physically beating her after the incident, Rosaleen refuses to succumb to their demands of an apology. “Two of them held me by the arms while the other one hit me – the one with the flashlight. He said, ‘Nigger, you say you’re sorry. ’ When I didn’t, he came at me. He hit me till the policeman said that was enough. They didn’t get no apology, though” (46).

June Boatwright displays strong femininity with her refusal to marry Neil due to the sake of having to give up her life to a man. June’s sister, August shows off yet another example of Kidd’s rich female characters, distinguishing herself with her wise, cultured, and interesting personality. “On [August’s] dressing table, where less interesting people would’ve put a jewelry box or a picture frame, August had a fish aquarium turned upside down with a giant piece of honeycomb inside it” (233). August shows herself to be extremely intelligent and clever, which challenges the typical opinion of black women.

June always said that most people bit off more than they could chew, but August chewed more than she bit off” (244). These rich female characters help shape the plot and quality of Kidd’s novel. Instead of centering a plotline around male characters with masculine strongpoints, The Secret Life of Bees takes a less opted for route. Due to Kidd’s encouragement of female guidance through mothers and female divinity, and a variety of wonderful female characters, a fantastic novel with a marvelous plotline which emphasizes the importance of the feminine is brought to life.

The Role of Feminism in the Secret Life of Bees. (2016, Sep 13). Retrieved from http://studymoose.com/the-role-of-feminism-in-the-secret-life-of-bees-essay 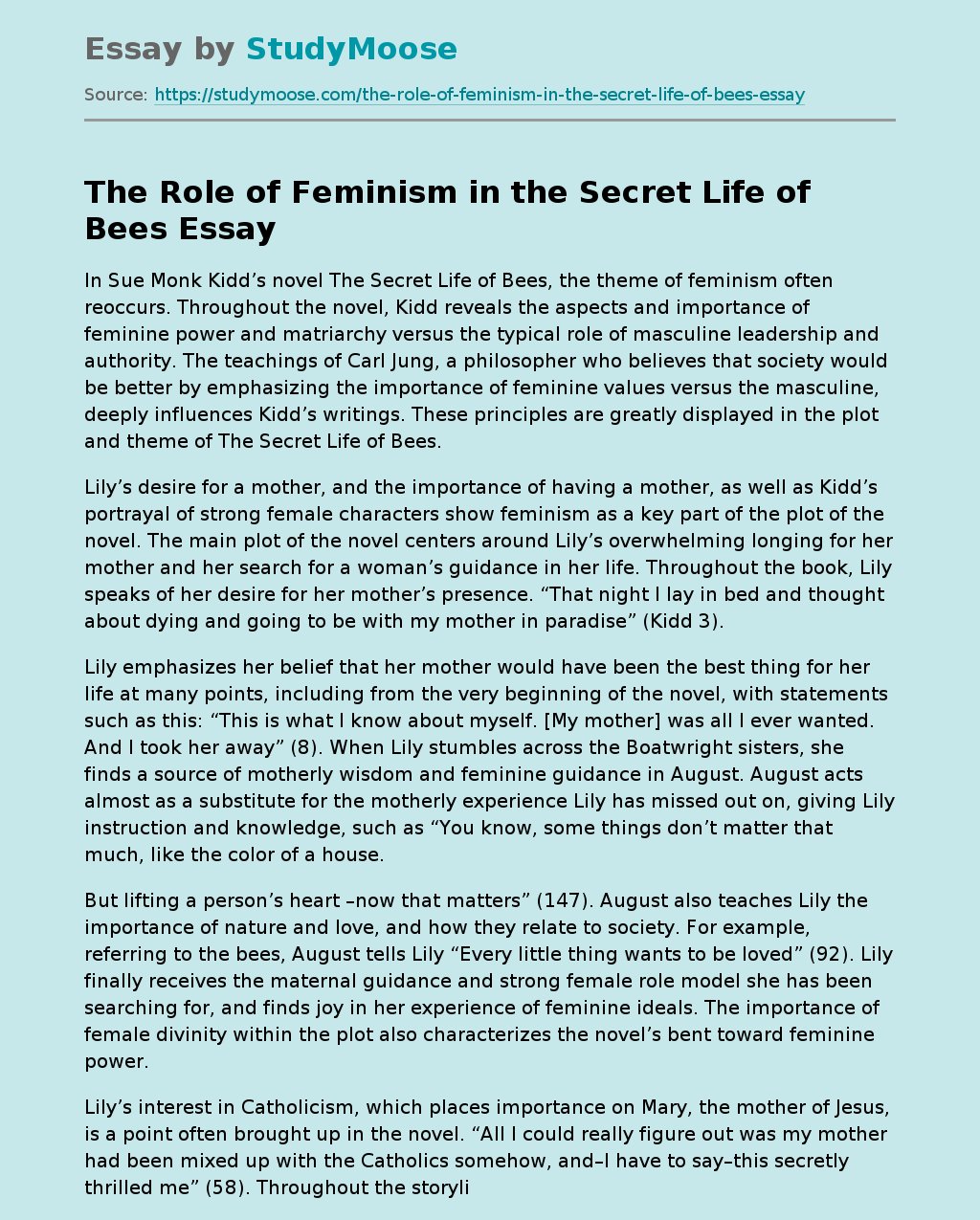