Maturity in the Secret Life of Bees

“One is not born but rather becomes a woman”- Simone De Beauvoir. In Sue Monk Kidd’s, The Secret Life of Bees, Lily Owens engages on a life changing expedition to make sense of her difficult predicament. Lily shows that she is a dynamic character as she matures in this coming of age novel. Lily portrays growth throughout the novel with her behavior with T. Ray, her prejudice view on the people who surround her, and her poor judgement about her mother.

Don't use plagiarized sources. Get your custom essay on
“ Maturity in the Secret Life of Bees ”
Get custom paper
NEW! smart matching with writer

Lily, the protagonist in The Secret Life of Bees, drastically changes her behavior with T. Ray throughout the course of the novel. Although at first screams and argues with him, Lily soon transforms and has a talk with T. Ray in a polite manner. In the beginning, while speaking with T. ray about Rosaleen being in jail, an argument breaks out about her mother when T. Ray tries to hit her.

Ray then gets angry and replies saying, “’you think that goddamn woman gave a shit about you? […] The truth is, your sorry mother ran off and left you. The day she died, she’d come back and get her things, that’s all. You can hate me all you want, but she’s the one who left you” (38-39). As soon the fight is over, the words sink in and settle in Lily’s mind which she is now concerned and questioning her mother leaving her as a child which causes her to pack her things, rescue Rosaleen and runs away to Tiburon.

Over a period of time that Lily spends there with the Boatwright sisters and Zach she matures.

Although the scenario still lingers in her mind Lily continues to live her life. When T. Ray finally finds Lily, Lily invites him into the house and talks to him in a respectful way. T. Ray starts by saying, “’Well, well, well. Look who’s here.’” Lily then responds saying, “’won’t you come in? […] have a seat if you want to’” (290). Lily’s demeanor towards her father is surely apparent than her past conversations with him. Even though it is evident that she would never go back home with him, she still shows him respect. Lily’s growth is proven through her modification in behavior towards her father.

Throughout the novel, Lily experiences some hurtful thoughts about the people who take her in. Even though she has nothing against colored people, Lily thinks some prejudice thoughts about the Boatwright’s and Zach. After August shows Rosaleen and Lily where they are going to sleep, she starts to remember what T. Ray said about colored women and reveals her own thoughts: “T. Ray did not think colored women were smart. Since I wanted to tell the whole truth, which means the worst parts, I thought they could be smart, but not as smart as me, me being white.

Lying on the cot in the honey house, though, all I could think was August is so intelligent, so cultured, and I was surprised by this. That’s what let me know I had some prejudice buried inside me. ” (78) Lily is very shocked that she thinks this way about colored people and soon acknowledges her bias thoughts. Despite the fact that Lily may have noticed her prejudice act, she still continues down the same path without noticing. While hanging out with Zach on the grass, Zach tells Lily that he doesn’t have much of a future since he is a Negro and she tells him how doing sports is the only way he can be successful.

She goes and says, “’well, you could play football for a college team and then be a professional player. ’” Zach then retorts and says, “’why is it sports is the only thing white people see us being successful at? I don’t want to play football, I wanna be a lawyer. ’” Lily then comes back again annoyed commenting, “’that’s fine with me, I’ve just never heard of a Negro lawyer, that’s all. You’ve got to hear of these things before you can imagine them’” (120-121). Lily’s prejudice ways are evident in her harsh comments towards Zach.

Even though she says all those rude things, she accepts Zach’s choices and supports it. Lily’s maturity is portrayed through her acceptance of Zach’s choices and wish. While staying at the Boatwright’s, Lily continues to think about what T. Ray told her about her mother leaving her as a child. Lily makes some atrocious comments about her mother in spite of her leaving. While speaking with August after telling her that she’s Deborah’s daughter, she reveals to August how she hates her mother and how her mother never wanted her which August then tells her how T.

Ray wanted to put her in Bull Street the mental institution. “’It was easy for her to leave me; because she never wanted me in the first place… you should’ve let him put her in there. I wish she’d rotted in there’” (252) Obviously, Lily’s negative words and thought have clouded her true feelings about her mother. August soon convinces Lily about her mother leaving.

Further into the conversation, August tells Lily that even though her mother left her, she came back for her the day she died which makes think: “T. Ray had told me that she came back for her things. But she’d come back for me, too. She’d wanted to bring me here, to Tiburon, to August’s. If only we’d made it. I remember the sound of T. Ray’s boots on the stairs. I wanted to pound my fists against something, to scream at my mother for getting caught, for not packing faster, for not coming sooner. ” (254) Lily soon realizes that her mother did love her and wanted to be with her even though she still blames her for not packing faster.

Despite the fact that her mother did leave her in the beginning, she still loves her mother, even more now that she knows that she was coming back just for her. Lily’s growth is surely evident due to the fact that Lily had a deeper understanding of what happened the day her mother died and she changed her perspectives on her. The Boatwright sisters, Zach and Lily herself are ultimately the ones to acknowledge for her astonishing change in behavior, her conversion of perspective on the people who take her in, and her modification to her dreadful comments made about her mother which help her grow in many ways.

The decisions she makes and paths she takes are influenced with the help from people who love her. In order to mature and gain an understanding, Lily goes Tiburon to seek her and her mother’s past, get a deeper understanding of why her mother left in the first place and change her view on things. It is apparent that people will do anything to get answers to complex questions that may be lingering in the minds, and on the way to getting their answers they experience growth, love and compassion and leave with a deep understanding.

Maturity in the Secret Life of Bees. (2016, Sep 29). Retrieved from http://studymoose.com/maturity-in-the-secret-life-of-bees-essay 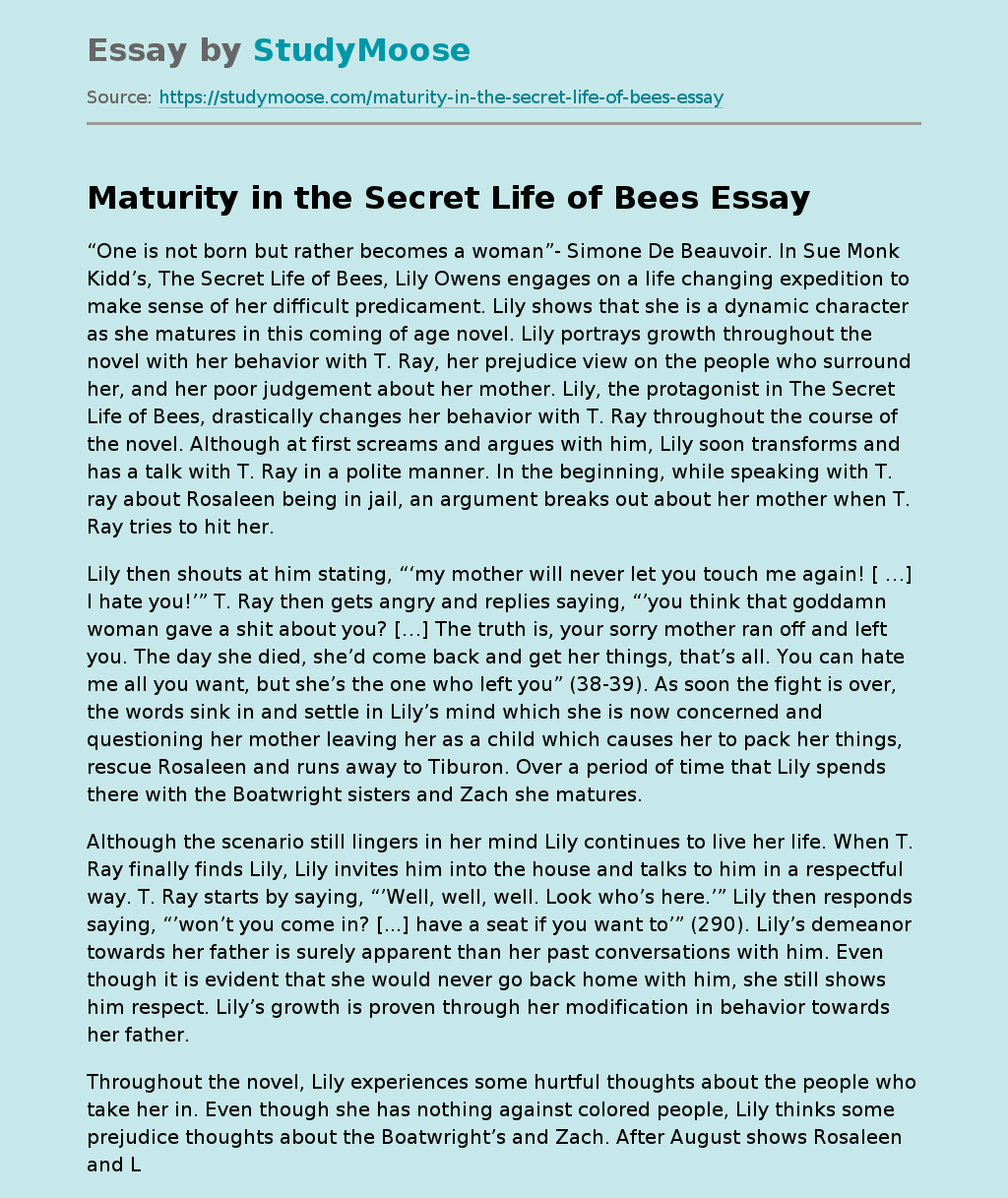