Lily Owens Character Analysis in The Secret Life of Bees

In 1964 in South Carolina, a girl named Lily Melissa Owens, a fourteen years old who gets abused by her father, who also abused her mother before she died. In the book, the author discussed how masculine leadership isn’t always the right option, feminine power and matriarchy is always an equal choice to lead. These biases are extremely displayed in the plot of the novel. Most importantly The Secret Life of Bees is loaded with colorful.

The main plot of the novel is about Lily’s staggering ambition of having a mother or having a women’s guidance in her life.

Don't use plagiarized sources. Get your custom essay on
“ Lily Owens Character Analysis in The Secret Life of Bees ”
Get custom paper
NEW! smart matching with writer

In the book, Lily talks about her desire for the presence of her mother. “That night I lay in bed and thought about dying and going to be with my mother in paradise” (3). Lily accentuates that her mother is the best thing in her life but after that, she comes and says “ This is what I know about myself. [My mother] was all I ever wanted.

And I took her away”(8). She knows that she killed her mother and she regrets doing it even that she didn’t understand what she has done. Although, when Lily found the Boatwright sisters’ house August gave her the feminine guidance she needed.

The way August Boatwright acts with Lily is like she’s her mother like she knows the things that Lily wanted and gave it to her. August starts teaching Lily the importance of nature and love, and how they present society.

“Every little thing wants to be loved” August is using the bees as an example of love and acceptance. Lily finally found what she was missing, a female role model. Lily enjoys the experience of feminine ideals, having someone that understands what she has been through and lead her to her dreams. Not to mention that August shows off a perfect example of Kidd’s rich female characters, specialize herself with her wise, cultured, and alluring personality. Nevertheless, the effect of female divinity within the plot also defines the novel’s bent toward feminine power.

Rosaleen also had a huge impact on her Lily’s life, her stubborn attitude and her refusal of backing down made Lily a stronger person. Despite the physical beating she has been through, Rosaleen refused to kowtow to their demands of an apology. “Two of them held me by the arms while the other one hit me – the one with the flashlight. He said, ‘Nigger, you say you’re sorry. ’ When I didn’t, he came to me. He hit me till the policeman said that was enough. They didn’t get no apology, though” (46). Also, June Boatwright is an example of strong femininity power with her refusal to marry Neil due to the sake of having to give up her life to a man.

These rich female characters help shape the plot and quality of Kidd’s novel. Instead of centering a plotline around male characters with masculine strongpoints, The Secret Life of Bees takes a less opted for the route. Due to Kidd’s encouragement of female guidance through mothers and female divinity, and a variety of wonderful female characters, a fantastic novel with a marvelous plotline which emphasizes the importance of the feminine is brought to life. 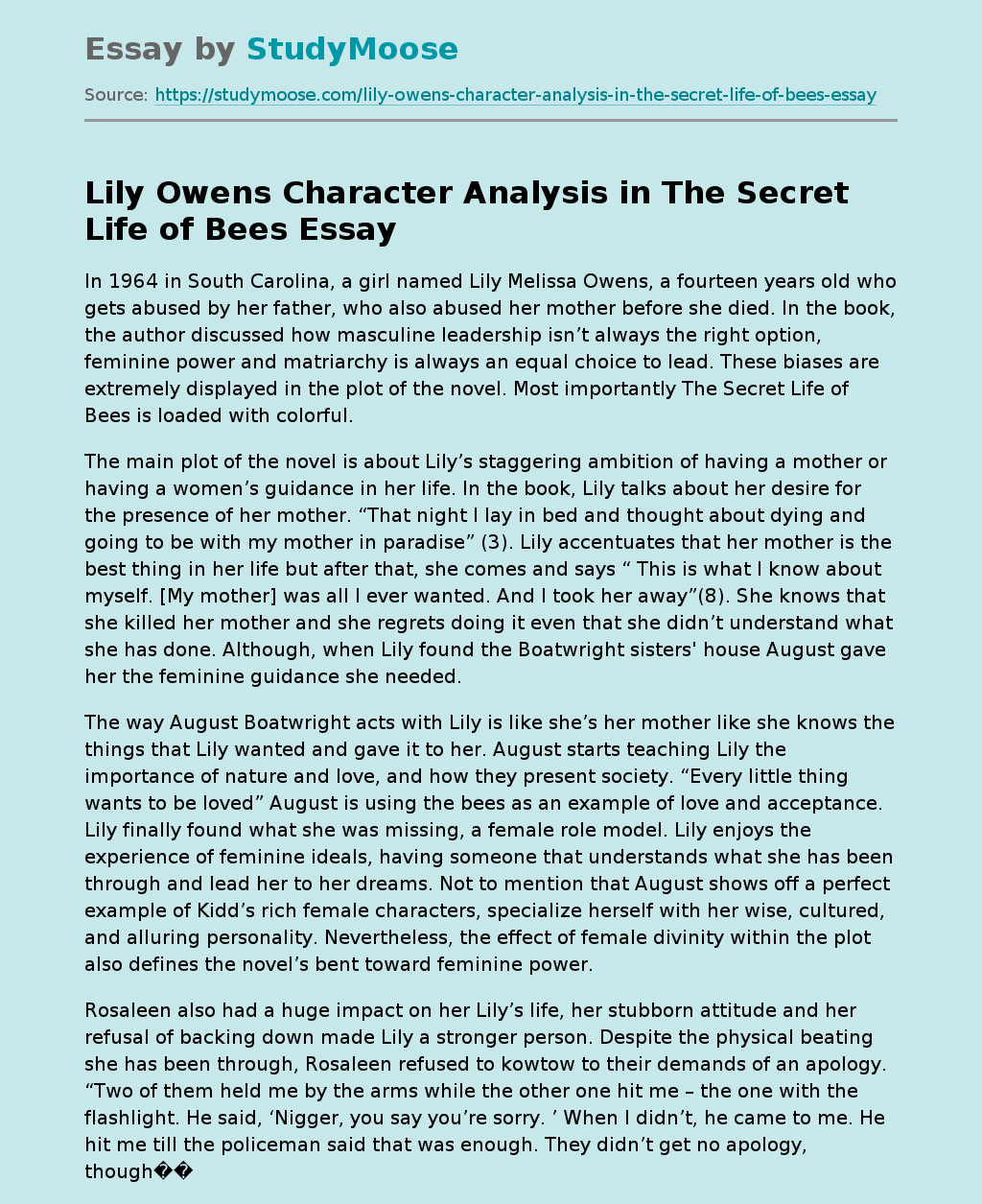