Themes and Symbols of The Secret Life of Bees

In the book, The Secret Life of Bees the author Sue Monk Kidd portrays a strikingly relationship between Lily and Rosaleen by showing how Rosaleen is somewhat a mother figure to Lily. The author uses the sentence “Rosaleen had never had a child herself”, to be shown as a meaning of how although she does not have any children she treats/looks at Lily as if she was her own. Lily is motherless, and Rosaleen is the adult female in the household.

Don't use plagiarized sources. Get your custom essay on
“ Themes and Symbols of The Secret Life of Bees ”
Get custom paper
NEW! smart matching with writer

She takes care of Lily, cooking the meals, and maintaining the house. She gives Lily love, rescuing Lily from her father’s extreme punishments and celebrating her birthday. She sets limits for Lily, just as a mother would do. She helps lily in her transformation and answers things that her father T.Ray can not. Having only a father, who is not truly a father can be rough especially for a growing lady such as Lily. Having Rosaleen there has helped Lily to understand more and have not only a maternal figure but also a women’s perspective too.

Although Rosaleen is a different color, Lily does not let her being white and Rosaleen not affect the way she feels about her. She states in the book, “Up until then I’d thought that white people and colored people getting along was a big aim, but after that, I decided everybody being colorless together was a better plan”. The quote shows that lily was not racist or against any color, instead it shows how much she supported them.

Like many white people during this time, they do not accept blacks or look at them the same way lily does. Soon after the story begins, Rosaleen decides to go into town to register to vote after the Civil Rights Act is signed. She gets harassed by a group of white men at the edge of town. As you might imagine, it does not end well. Lily tried calming down and showed affection while it was happening. As quoted in the book, “You ain’t going anywhere. Just the girl. At the door I held on to the cell bar like it was the long bone in Rosaleen’s arm”. This quote is used to imply a perspective of how Lily is showing affection and wanted Rosaleen to be out with her as well since she had done nothing wrong. However, this is not only a one-way relationship but a two way, metaphor. And this is because Rosaleen also showed affection and care for a girl who is different skin color, as though Lily would have done in this relationship.

Lily and Rosaleen’s relationship as portrayed in the book shows how deeply she cares for lily and so does herself for Rosaleen. Rosaleen goes to jail.

Nevertheless, Rosaleen is an important influence on Lily in the novel: when Lily doubts herself or feels afraid, she can always turn to Rosaleen for love and support.

Themes and Symbols of The Secret Life of Bees. (2020, Oct 11). Retrieved from https://studymoose.com/themes-and-symbols-of-the-secret-life-of-bees-essay 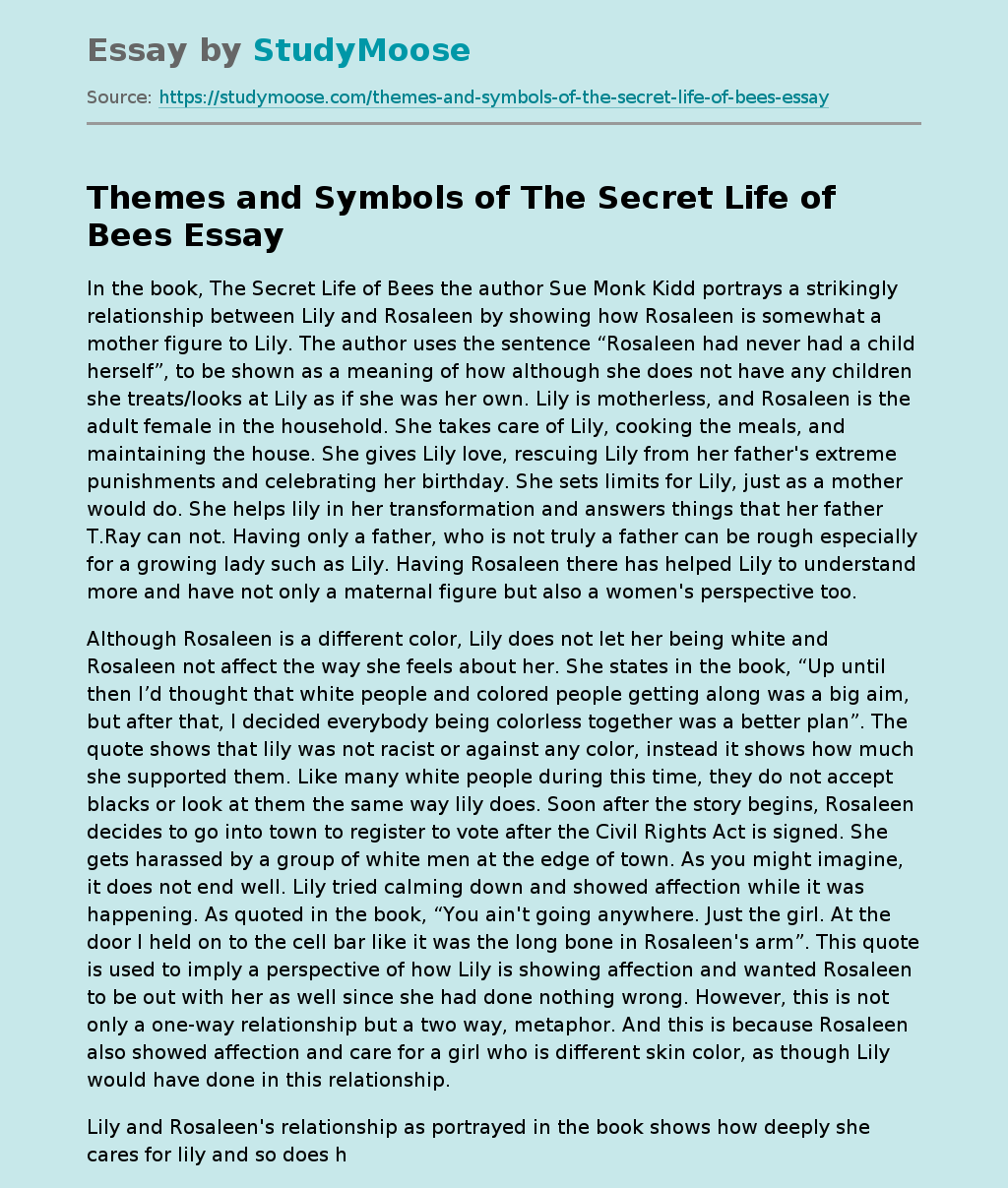