The famous former United States Secretary of Health and Human

The famous former United States Secretary of Health and Human Services Sylvia Mathews Burwell said: “While natural disasters capture headlines and national attention short-term, the work of recovery and rebuilding is long-term.”However, what is a natural disaster? A natural disaster is a natural event that negatively affects life, property, livelihood or industry often resulting in permanent changes to human societies, ecosystems and the environment. There are many natural disasters that we experience like the storm, volcanic eruptions and earthquakes. The most common natural disaster most countries face is floods.

Don't use plagiarized sources. Get your custom essay on
“ The famous former United States Secretary of Health and Human ”
Get custom paper
NEW! smart matching with writer

Floods are usually an overflow of a field of water that submerges land and the inflow of stream onto land. The origins of floods are mainly caused by tropical storms, global warming, and tsunamis.

The first major cause of floods is tropical storms. Storms get water from oceans and bring it to land. Sometimes, streams and rivers cannot handle the heavy rain, therefore water overflows and produces floods. Additionally, ineffective drainage complicates the problems of flooding even more.

Most drainage systems in most countries cannot handle a large amount of water because they are blocked by the trashes of people thrown on sidewalks. For example, well known tropical storms that caused floods were hurricane Camille in 1969 in Virginia and the recent Typhoon Ondoy.

The second cause of floods is Global Warming. Global warming is the heat trapped in the earth’s atmosphere which slowly warms our planet. Global warming heats water from oceans and seas. It helps the water to evaporate faster.

The third cause of floods is tsunamis. One cause of tsunamis is high winds. High winds create waves that would hit beaches and coasts. Another cause of tsunamis is seismic activities; some examples are underwater volcanoes and earthquakes. When undersea volcanoes erupt or when earthquakes occur, they form tsunamis. Tsunamis are dangerous because they hit the land at high speed. Furthermore, as they approach the land, they slow down and gain height.

Thus, the consequences of floods are devastating. Houses can be torn off their foundation because the water has made its structure weaker, tar can be pulled off the road, causing larger pothole, the earth can be sunk into creating a different landscape and tons of trees have the possibility of being shredded. The effects after floods are considerable. Water has to be pumped out of flooded civilian houses.

In addition, floods effect is environmental and they also negatively affect the economy of a country. When floods occur, there is a huge amount of water that runs over the ground. Loose soil, rocks, and landscape can be dramatically altered, leaving behind a rugged, changing landscape. Loose soil can create mudslides, which create hazardous situations for living things nearby. Similar, concerning the economy, billions of dollars have to be donated by other countries to rebuild and pay back what was lost during the floods. Many times, these things include houses, roads, buildings, and schools. Another thing that people lose in the event of floods is their jobs; since the workplace of these people have been destroyed. Consequently, businesses are run down and made bankrupt. This causes lots of people to be jobless and, as a result, they cannot pay their daily basic needs.

Moreover, humans can lose so much during floods. One of the most important things a person can lose is his life. If a person gets caught in floods and is swept away, they can drown into the water. Many times people do not die only from the floods itself; but also due to the outcomes of the floods such as starvation, dangerous objects floating in the water, and much more. The water makes it more difficult for medical services to help the civilians. These people must rely on the rescuers to bring them food; hence, if the aid workers take long getting through the water, many families starve to death.

Floods reduction requires analysis of the causal factor, preventive and protective measure should be adopted to decrease flooding. It is important that the measures required to reduce flooding have to be well identified and operated upon from policy to the practical side. The efforts need to be planned and a holistic approach should be implemented to reduce the overall impact of the floods. Protective works should consider and promote local knowledge and resources for sustainability and also ensure the cost-effectiveness of the structure.

Technology can provide governments, planners and engineers with essential feedback, offering a better way to predict the behaviour of the built environment or soon to be built environment during a crisis. In effect, advanced technology provides a proactive means to more effectively disaster-resistant communities.

Equally important, the government must find new ways to prevent and reduce flood damage. This includes the development of infrastructure and long-term maintenance and preparation in the event of a disaster. Today, technology is available from Autodesk and other technologies that converge architecture, engineering design and geospatial data. Cities have the capability to use precise geospatial data and apply it across the entire infrastructure lifecycle, including operations and maintenance. This integration has enabled significant changes to be made to address town planning and management needs.

On the whole, floods are the most frequent natural disaster and there are several causes of floods. Some of the principal causes are tropical storms, global warming, and tsunamis. Many times, the results are devastating. The environment and economy are negatively affected, the land is washed away, houses are damaged, and peoples’ lives are changed forever. To combat flooding, technology can be used to prevent. If we put wealth and effort through technology to stop floods, the disagreeable effects of floods will be minimised. 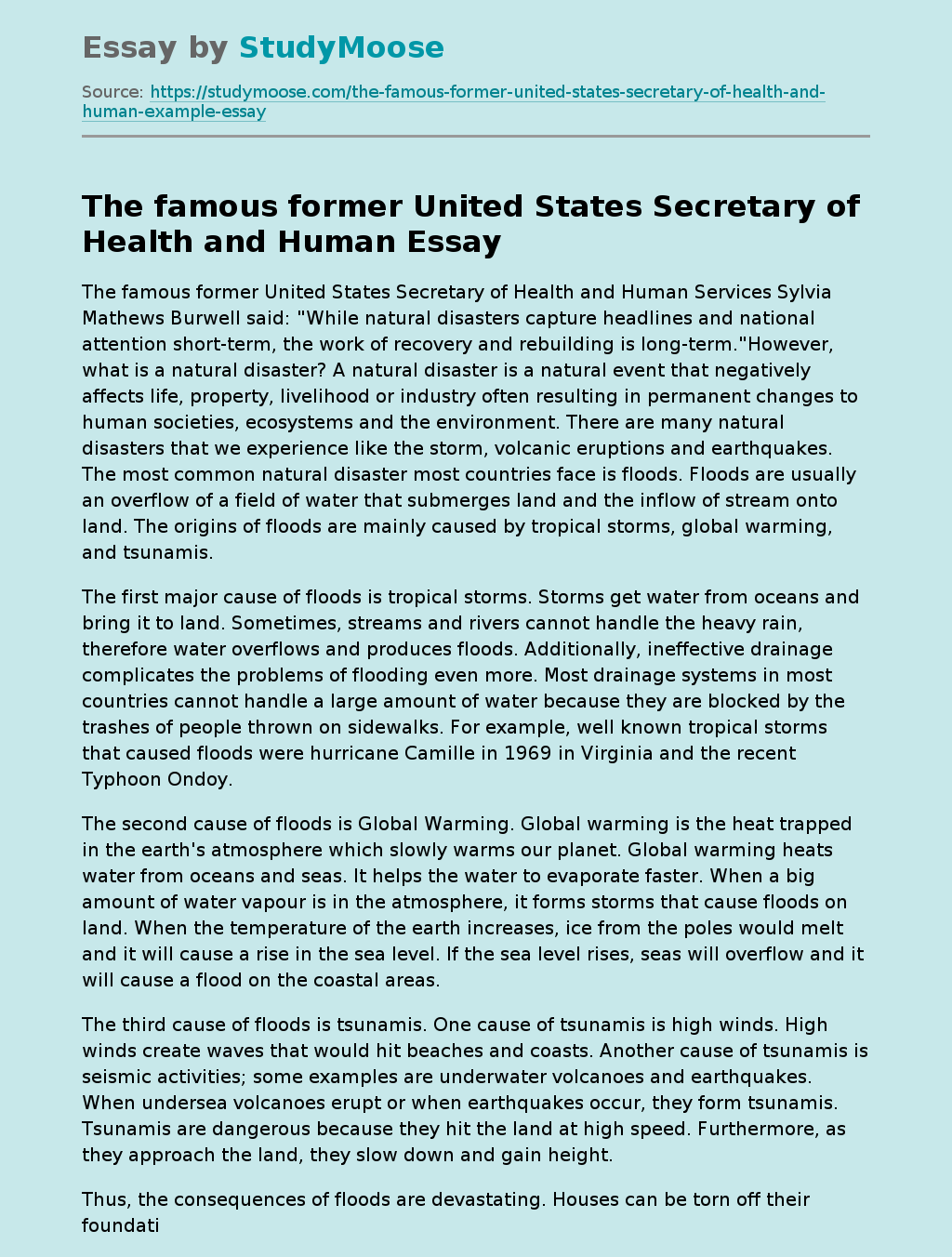