The curious incident of the dog in the night time: characer of Christopher

In the novel ‘The curious incident of the dog in the night time’, we meet an interesting child who goes by the name of Christopher and see he suffers from Aspberger’s Syndrome. As Christopher progresses through the novel we struggle with the thought of the possibility of a traditional hero being displayed by Christopher’s actions; by Joseph Campbell’s guidelines. In retrospect, Christopher has the tendency to portray significant aspects in which allows him to meet the “Traditional Hero” persona.

Don't use plagiarized sources. Get your custom essay on
“ The curious incident of the dog in the night time: characer of Christopher ”
Get custom paper
NEW! smart matching with writer

When the novel begins Christopher’s Heroic journey takes flight, when he encounters the dead body of Wellington (a black poodle) in the back yard of Mrs. Shears.

This situation encourages Christopher to answer the call to adventure in a sense to write a ‘Murder mystery Novel’ of the death of Wellington; like he says, “I stroked Wellington and wondered who had killed him and why.”(2) With the help of his teacher Siobhan he began his journey out of the Innocent world of childhood, and by doing so throughout the novel he begins to realize there is a much bigger world outside than he may be prepared for.

This of course poses as a reason at first for Christopher to refuse his call to adventure, as Christopher makes it clear that social and physical interaction nearly impossible by not being able to be hugged by his father let alone understand metaphors. The only true bond he shares is with his pet rat Toby, who he takes as a companion on his quest to solve every mystery tossed his way.

While Christopher is solving the mystery of Wellington’s killer his father becomes a key threshold against the success of achieving his sought out goal. With good reasons Christopher’s father tries to constantly instigate that Christopher ‘keep his nose out of other people’s business.’ But eventually fails at keeping the boy at bay and his son finds out that his father was the killer of Wellington, and has been lying to him about the death of his mother. When earlier in the novel his father said, “She died of a heart attack and it wasn’t expected.”(27) In light of all this information Christopher figures, ‘if he could lie and kill a dog then he could kill me.’

This gives Christopher the strength to cross the first threshold in his heroic journey; in search for his now living mother, which leads to a road of trials. With the motivation to find his mother and live with her, Christopher must enter the belly of the whale to reach her. By doing so he has to leave his home in which he truly loves and felt safe in and ventured in to an unknown territory. This of course is frightening to him because as he says in the novel, “When I am in a new place and there are lots of people there it is like a computer crashing and I have to close my eyes and put my hands over my ears and groan,” (143) Which almost immediately happens once he enters the train station to head to London to find his mother’s house.

This also could be considered a new Threshold with the combination of Threshold guardians because he is constantly being chased by the police to get him back to his father in whom he fears. But he showed a great Refusal to return by tricking and dodging his captors (the police) and pushed onwards to the “meeting with the goddess”, his mother. In the end though everything doesn’t really work out as Christopher thought would.

His mom seems to be very incapable of supporting him with her current lifestyle in London, and as soon as they were reunited situations occurred that forced Christopher to reunite with his father, unwillingly. Even though he refuses to go home to his father’s house he, still yearns to do his A-level maths in which he has studied for. Thus helping Christopher to cross the Threshold of fearing his father through a difficult process of regaining trust. We somewhat see that he has become the master of two worlds as long as there is a probable cause behind extending past his own comfort zone. Showing that in a unique way even someone who suffer from such a disease that makes social, physical, and psychological development difficult can be seen as a Traditional Hero.

The curious incident of the dog in the night time: characer of Christopher. (2016, May 16). Retrieved from http://studymoose.com/the-curious-incident-of-the-dog-in-the-night-time-characer-of-christopher-essay 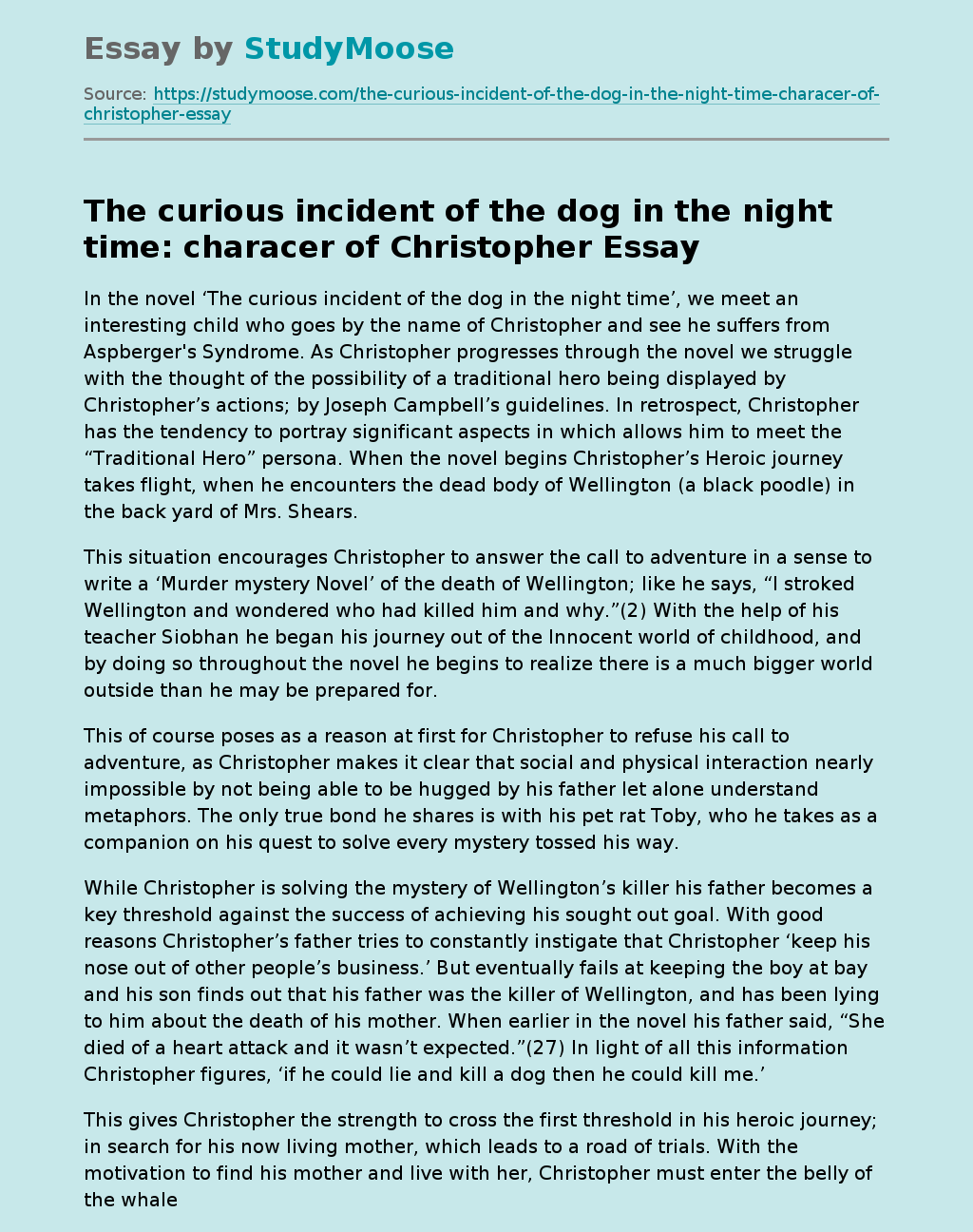