Summary
The “Iron Curtain” speech by Winston Churchill and the election speech of Joseph Stalin contain the similarity that they both are telling the audience what should and has happened. In Winston Churchill’s speech he outlines what has happened throughout World War II and the Cold War and how he thinks it should be handled and dealt with. In Joseph Stalin’s speech he relays a similar time line while also including the Soviet Unions timeline and election history. Stalin goes more in depth into what is happening in Russia and what he wants to change and do.

He rallies the audience by giving statistics and numbers of supplies, weapons, and men. He also talks about his five-year plans and the completion of them. He continues with the relationship of the communist party and industries in the Soviet Union. Economics and foreign policy are frequently brought up throughout the speech as he speaks to his people. He makes a point the two World Wars were similar, but most definitely not repeats nor accidents.

Stalin concludes with thanking the congregation for nominating him as a candidate and showing him the respect he thinks he deserves. He also shows his great support of the communist party through out the speech.

Winston Churchill starts out his speech addressing the venue and the people who invited him to speak. He begins to foreshadow the possibilities of nuclear destruction and the immaturity of using such forces. He then falls into an outline of the countries involved in the war and his interpretation of their thoughts of everything going on.

Commonwealth is a continuous topic throughout the address and is explained and used in multiple examples. Churchill also addresses the tragedies of war and the harmful affects it has on nations and their people. He concludes his speech with a call for action. He states that banding together will result in a clear future for generations to come. The similarities in the two speeches are the drawing of attention towards pressing issues. Both Stalin and Churchill try to rally their audiences to believe and do as they say.

The difference in that Stalin uses his way of speech as a command while Churchill uses his as more of a suggestion. They both address foreign policies of their countries and discuss war. Neither likes the results of war, but Stalin takes a more ignorant stance against it while Churchill is completely against war. Both speeches had dramatic effects on the foreign policies of the nations they were given in. Winston Churchill ‘s speech led to the United States further emphasis on the containment of the Soviet Union and communism. Joseph Stalin’s speech led to the Soviet Union putting greater political pressure in Europe and trying to spread communism further. The results of these two speeches will forever change history and have greatly impacted the way foreign policy is used today by the United States and Russia. 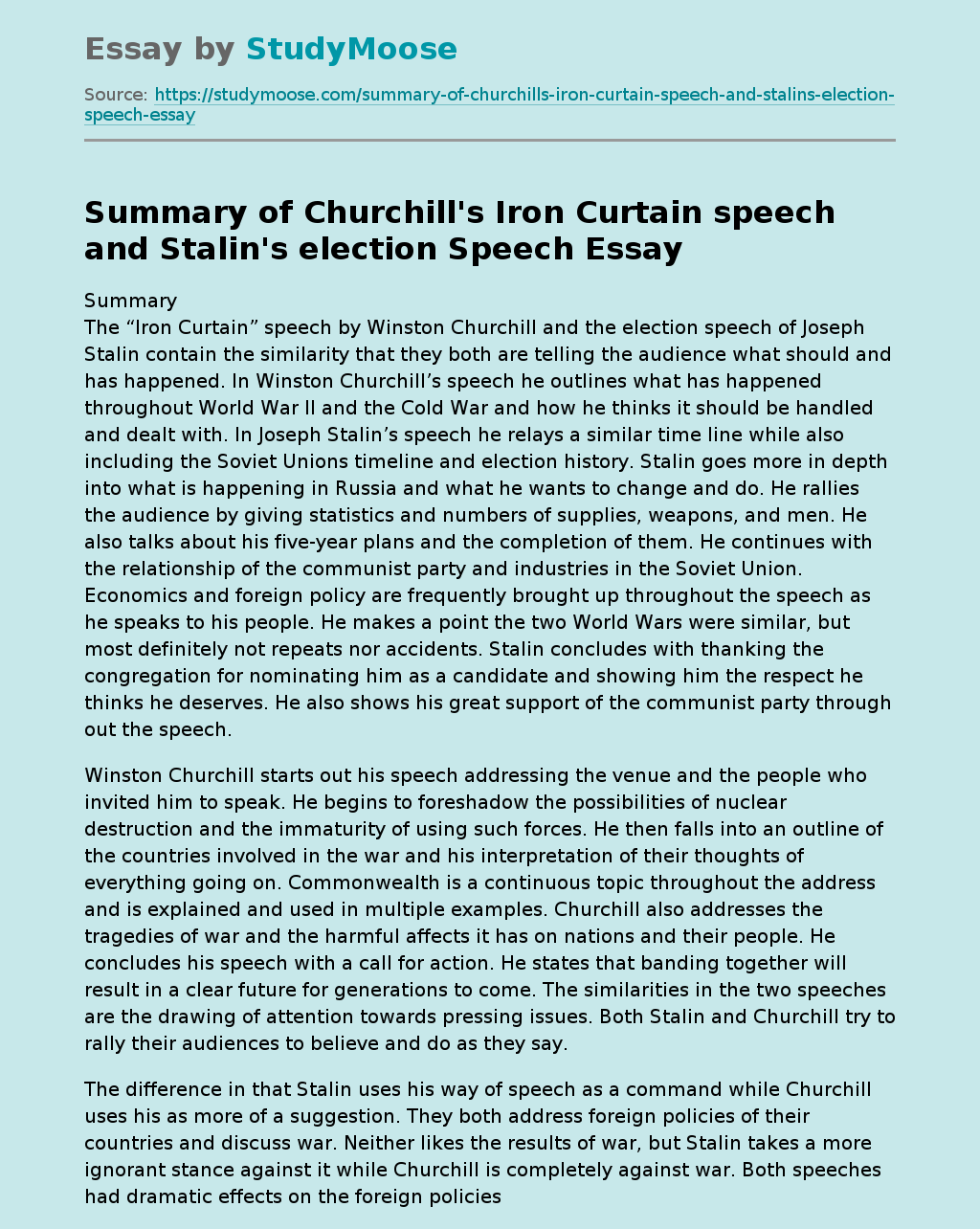